Bread in the Bible Trivia Quiz

Bread really does seem to crop up quite a bit in the Bible. Pit yourself against ten questions about this daily substance and associated trivia. A King James Version of the Bible was used.

Quiz Answer Key and Fun Facts
1. While Jesus was wandering the desert, Satan tried to tempt Jesus into turning some objects into BREAD to feed himself. What were these objects?

A detailed account of the temptations of Jesus while He was wandering in the desert can be found in Matthew 4:1-13. After being baptised, Jesus was led by the Holy Spirit into the wilderness, where he fasted for forty days and forty nights. Satan came to Him, and told Him that if He really was the Son of God, He should command the stones to be turned into bread, to which Jesus replied "Man shall not live by bread alone, but by every word that proceedeth out of the mouth of God."

Satan then took Him into the Holy City to the pinnacle of the temple, and said that if He really was the Son of God, he should cast Himself down to see if the angels would save Him, to which Jesus replied "It is written again, Thou shalt not tempt the Lord thy God."

The third and final temptation that Satan tried to entice Jesus with was a trip up a very high mountain. He showed Him the glory of all the kingdoms of the world, saying to Jesus that he would give them all to Him if Jesus would fall down and worship him, to which Jesus replied "Get thee hence, Satan, for it is written, Thou shalt worship the Lord thy God, and Him only shalt thou serve."

After the third temptation failed, Satan left, and angels came to aid Jesus.
2. During Passover, Israelites were (and still are) required to eat unleavened BREAD. What does the eating of unleavened BREAD symbolise, according to the Bible?


Answer: It's to symbolise the haste with which the Israelites had to leave Egypt.

The origin of eating unleavened bread comes from Exodus, during the time of Moses. After the slaying of the Firstborn, the Israelites had to leave Egypt quickly. They had to take food with them, but they didn't have enough time to bake any bread with yeast, which would help it rise.

"And they baked unleavened cakes of the dough which they brought forth out of Egypt, for it was not leavened; because they were thrust out of Egypt and could not tarry, neither had they prepared themselves for any victuals."
Exodus 12:39.

Today, Passover remembers the freedom of the Israelites, after having been enslaved in Ancient Egypt.
3. In the book of 1 Kings, what type of birds brought Elijah meat and BREAD to eat?

Ravens bring the Prophet Elijah bread and flesh (meat) just after he had predicted drought to King Ahab. The entire story of Elijah predicting a drought can be found in 1 Kings 17.

The following is taken from 1 Kings 17:6

The story of Elijah is an awesome one. The stories surrounding the prophet Elijah can be found in 1 Kings and 2 Kings.
4. On how many separate occasions (mentioned in the Bible), did Jesus miraculously increase the amount of BREAD on hand, to feed a multitude of people?

Jesus miraculously increased the number of bread on hand not once, as is widely believed, but twice. The first event, known commonly as the "miracle of the loaves and fish," is reported in all four canonical Gospels. The second occurrence is only reported in the Gospels of Mark and Matthew.

The first occurrence of this miracle can be found in the following passages: Matthew 14:13-21; Mark 6:30-44; Luke 9:10-17; and John 6:5-15. All the passages mention the feeding of 5000 people. In all the accounts of it, the disciples gave Jesus five loaves of bread, and two fishes (the Gospel of John adds that this came from a small boy who happened to be in the crowd at the time), which He gave thanks for, and used to feed the multitude that He was teaching at the time. After the multitude had eaten, Jesus commanded the disciples to collect up the fragments so that nothing would be wasted. The disciples managed to collect a whopping total of twelve baskets full of fragments left over!

As stated above, the second occurrence of the miraculous event is only mentioned in the Gospels of Matthew and Mark. The accounts can be found in Matthew 15:32-39, and Mark 8:1-10. Both Gospels say that in this case, 4000 people were fed. The disciples gave Jesus seven loaves of bread, which he gave thanks for, broke, and distributed to the hungry multitude (there also some "small fishes" involved, but neither Gospel mentions how many). After the multitude had finished eating, the disciples once again gathered up the fragments, and this time, they managed to collect seven baskets full of fragments of broken bread.

Imagine how useful something like this would be today!
5. Although the ingredients are mentioned in a fairly "obscure" passage of the Bible, what was BREAD in the Bible commonly made out of?

All of this information is addressed in the Old Testament.

Two mentions of bread being made out of wheat can be found in Exodus 29:2, and Judges 6:19.

A mention of bread being made out of barley can be found in Judges 7:13.

While both wheat and barley (and probably some other types of grain) were used to make bread, most Biblical historians would agree that bread was most commonly made out of wheat, as it was the most easily accessible grain that there was during Biblical times (and is still quite easy to come across today).
6. When Jesus started sending forth his disciples for ministry work, did He want them to take BREAD with them on their journeys?

The accounts of Jesus telling His disciples to go to cities and preach and spread His word (often referred to as "The Mission of the Twelve") can be found in Matthew 10:5-15, Mark 6:7-13 and Luke 9:1-6.

Basically, Jesus call His disciples to Him, and told them that they should take nothing on their journey except for a staff; no scrip, no BREAD and no money in their purse. When they got to the city, they were to inquire as to who was worthy, and stay there until their visit was over. While they were there, they were to cleanse lepers, cast out unclean spirits and heal all the sick.

Here is the King James Version excerpt from Mark 6:7-13.

"And He called unto Him the twelve, and began to send them forth by two and two; and gave them power over unclean spirits; and commanded them that they should take nothing for their journey, save a staff only; no scrip, no bread, no money in their purse: but be shod with sandals; and not put on two coats. And He said unto them, In what place soever ye enter into a house, there abide till ye depart from that place. And whosoever shall not receive you, nor hear you, when ye depart thence, shake off the dust under your feet for a testimony against them. Verily I say unto you, It shall be more tolerable for Sodom and Gomorrah in the day of judgement, than for that city. And they went out, and preached that men should repent. And they cast out many devils, and anointed with oil many that were sick, and healed them."
7. While the Israelites were in the wilderness after escaping from Egypt, in "the face of the wilderness lay a small round thing." This was special BREAD, a gift sent from God. What was this type of BREAD called?

The story of the "discovery" of this type of bread can be found in Exodus 16, specifically mentioning "manna" in 16:14-15.

Basically, after the Israelites had been complaining about a scarcity of food after escaping from Egypt, God promised to "rain bread from heaven" (Exodus 16:4). After this, God gave the Israelites a new and exciting bread, obviously called manna, and He also blessed them with quail meat.
8. In the Gospel of John, Jesus called himself the BREAD of _________.

This, to me, is one of the most inspiring passages out of the Bible. It can be found in the Gospel of John, 6:35.

Many perceive this passage as a foretelling of Jesus breaking bread at the Last Supper, and His sacrifice for mankind.
9. When Joseph had been thrown into jail, two of Pharaoh's servants were thrown in along with him. One of the servants was Pharaoh's chief baker (who, obviously, baked BREAD). What was the title of the other servant whom was also thrown into jail?

The story of Joseph interpreting the dreams of Pharaoh's servants while in prison can be found in Genesis 40.

Joseph had been thrown into prison by Potiphar after allegedly "raping" Potiphar's wife. Eventually, Joseph was joined by Pharaoh's chief baker and chief butler. Both had had fairly disturbing dreams, and both wished to have them interpreted.

The chief butler had dreamed that he was standing before a vine that had three branches. Blossoms shot forth and brought with them ripe grapes, which the butler took, pressed into Pharaoh's cup, and handed the cup to Pharaoh. Joseph interpreted that the three branches represented three days, after which Pharaoh would restore the butler to his original position.

The chief baker had dreamed that he had three white baskets on his head. In the top one were all matter of bakemeats for Pharaoh, which the birds ate out of. Joseph interpreted that the three baskets also represented three days, after which Pharaoh would hang the baker from a tree, and the birds would eat at his flesh.

Lo and behold, three days later, both of Joseph's interpretations came true. After a while, he was called to the palace to interpret some of Pharaoh's dreams.
10. In which of the following passages from the Book of Luke did Jesus give BREAD a new significance, by saying that it symbolised his body, which he was about to sacrifice for the salvation of the Earth?

The event of Jesus breaking bread took place at the event known commonly as the Last Supper, which occurred during Passover. The tale of the Last Supper can be found in the four canonical Gospels in the following passages: Luke 22:7-23, Matthew 26: 17-29, Mark 14: 12-25 and John 13:1-9.

Thank you for playing my quiz. I hope you enjoyed it. God bless!
Source: Author thegogga 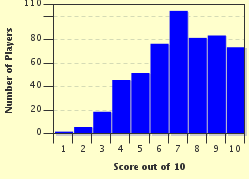 
Other Destinations
Explore Other Quizzes by thegogga