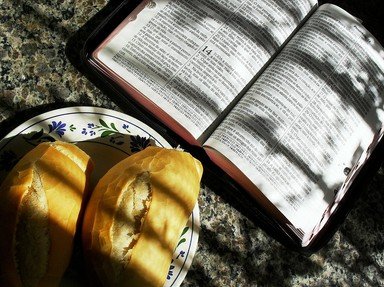 Fasting and the Breaking of Fasts in the Bible Quiz

Inspiration for this quiz about fasting came after reading 'The Complete Book of Bible Trivia' by J. Stephen Lang. I hope you have as much fun playing the quiz as I had writing it.

Quiz Answer Key and Fun Facts
1. According to Exodus 34:27-28, who fasted for forty days on Mount Sinai?

Scripture tells of Moses ascending Mount Sinai to meet with God and receive the Ten Commandments. Exodus 34:28 states Moses was with the LORD for forty days and forty nights and "neither ate bread nor drank water."

Scripture goes on to tell of Moses descending from the mountain with a shining face.
2. According to 2 Samuel 12:15-16, who fasted in a vain attempt to save the life of his unnamed son born by Bathsheba?

David is the correct answer. 2 Samuel 12:15:23 tells of David fervently praying and fasting to save the life of the unnamed infant that was born as a result of an adulterous relationship between him and Bathsheba. And rather than sleep in a bed, Scripture states David slept on the ground.

Previously, David had been told by Nathan the prophet the child would be struck dead as a result of David's adulterous affair and his orchestration of the death of Uriah, Bathsheba's husband. David's fasting and prayer efforts were in vain, with Scripture going on to tell of the death of the baby seven days after he was born.
3. According to 2 Chronicles 20:1-4, what king of Judah called for a fast when word was received enemy forces were about to attack?

Jehoshaphat, king of Judah, called for a fast when he received word "a great multitude" of soldiers from Moab and Amon were preparing to invade the kingdom. After receiving the news, Scripture states Jehoshaphat declared a fast among all the people and fervently prayed to God for deliverance.

Scripture goes on to tell of the Moabites and the Amonite soldiers suddenly turning against each other in the wilderness of Tekoa with no attack on Judah taking place. Later, the Jews looted the dead bodies and accumulated an abundance of "valuables and precious jewelry". In fact, Scripture states it took the Jews three days to collect the spoil as there was so much.

When the Jews returned to Jerusalem they played stringed instruments, harps and trumpets to express their praise to the LORD.

For further details, see 2 Chronicles 20:1-30.
4. Who fasted before leaving Babylon to re-build a wall around Jerusalem?

Ezra 8:21-23 tells of Ezra proclaiming a fast by the river of Ahava so the Jews could humble themselves before God prior to their long journey from Babylon to Jerusalem to build a wall around their beloved city. The passage states Ezra was "ashamed" to request of the Babylonian king an escort of soldiers and horsemen to protect them against the enemy on the road. The reason for this is Ezra had previously told the king, "The hand of our God is upon all those for good who seek Him, but His power and His wrath are against all those who forsake Him."

After fasting and entreating God, Ezra states in Verse 23 "He answered our prayer."
5. According to Nehemiah 9:1-3, the MAIN sin was marriage to foreigners that caused the Israelites to fast after Ezra read to them details from the Book of the Law.

True. Nehemiah 9:1-3 tells of the people assembled "with fasting, in sackcloth, and with dust on their heads" and those of Israelite lineage separating themselves from all foreigners. The passage tells of the people "confessing their sins and the iniquities of their fathers" and reading from the Book of the Law.
6. What prophet travelled to Nineveh, resulting in the people fasting?

Jonah is the correct answer. Jonah 3:5-10 tells of the people of Nineveh believing in God as a result of Jonah's preaching and then proclaiming a fast and putting on sackcloth.

Verses 7-8 tells of the king of Nineveh issuing the following proclamation: "Let neither man nor beast, herd nor flock, taste anything; do not let them eat, or drink water. But let man and beast be covered with sackcloth, and cry mightily to God; yes, let every one turn from his evil way and from the violence that is in his hands."

Jonah, of course, initially resisted divine instructions to go to Nineveh to preach a message of repentance. However, when Jonah finally visited the city he had immense success in getting the people to turn their hearts to God.
7. According to Acts 10:1-8, what Roman centurion was fasting when an angel instructed him to call for Peter?

Acts 10:1-3 tells of Cornelius, a Roman centurion, fasting when he received instructions from an angel to call for Peter, one of the original Twelve Disciples. Scripture goes on to tell of Peter visiting Cornelius in Caesarea and baptizing him as well as members of his household and others. Going strictly by Scripture, Cornelius was the first Gentile believer in the Lord Jesus Christ.
8. Jesus is quoted in Matthew 17:21 as saying prayer and fasting are two ingredients to drive out demons.

True. Matthew 17:21 quotes Jesus as telling His original Twelve Disciples prayer and fasting are needed to drive out demons. Jesus made the statement after the disciples told Him they were unable to drive out a demon from an unnamed epileptic boy. However, when the boy was taken to Jesus, Scripture states He "rebuked the demon, and it came out of him; and the child was cured from that very hour."

For more details, see Matthew 17:14-21.
9. According to Acts 13:1-3, the elders of a church fasted before they sent out Paul and Barnabas as missionaries. Where did the fasting take place?

The elders of the church in Antioch fasted, prayed and laid their hands on Paul and Barnabas before sending them away as missionaries, according to Acts 13:1-3.

Tradition holds the first church consisting of Gentiles was in Antioch. In addition to sending Paul and Barnabas as missionaries, Acts 11:26 states the disciples were first called Christians at Antioch.

Wikipedia states Antioch was in present day Turkey, just north of the border with Syria.
10. According to Luke 24:38-43, what did Jesus eat after His resurrection, proving to His disciples that He was not a phantom?

Luke 24:38-43 tells of Jesus miraculously appearing to His disciples after His crucifixion and then eating fish, proving He was not a phantom. According to the passage, the disciples were "terrified and frightened" thinking they had seen a spirit. Seeing their fear, Jesus is quoted as saying in Verses 38 and 39 in the NKJV Bible: "Why are you troubled? And why do doubts arise in your hearts? Behold My hands and My feet, that it is I Myself. Handle Me and see, for a spirit does not have flesh and bones as you see I have."

He then consumed some broiled fish as well as some honeycomb. Going strictly by Scripture, this was the first time Jesus ate since His crucifixion.
Source: Author Cowrofl

Related Quizzes
1. Chew on This Quiz: Hunger in the Bible Easier
2. Land of Milk and Honey Easier
3. Pass the Pillar of Salt: Meals in the Bible Easier
4. Gumbo and Mumbo Jumbo Easier
5. What Ya Got Cookin'? Average
6. Fasting in the Old and New Testaments Average
7. Come and Dine With Me in the Bible Average
8. Wine in the Old and New Testaments Average
9. Well, Well, Well! -- A Bible Quiz About Wells Average
10. Bare Bones Quiz About Famine in the Bible Average
11. Are You Worth Your Salt? Try This Quiz Average
12. Sink Your Teeth Into a Sweet and Sour Quiz Average