In the Footsteps of the Bible Trivia Quiz

This quiz involves ten people from the Old Testament, as well as situations they faced and dealt with. The questions are in no chronological order. Enjoy!

Quiz Answer Key and Fun Facts
1. After the Flood ended, Noah settled down with his family and grew a vineyard. After drinking some of his wine, Noah became drunken and fell into a stupor, naked. One of his sons saw him but didn't cover him; he told his brothers instead. Noah became enraged and cursed that son of his. Whom?

The biblical narrative concerning Noah's curse on Ham has been hotly debated for centuries. It is said that the story was written on purpose in order to justify the Israelites' domination over Canaan and the Canaanites. Yet, several Jewish, Christian and Muslim commentators tried to use the story in order to justify slavery, arguing that Ham had black skin or that his descendants populated the African continent.
The painting shown is "Noah's Sacrifice" by Daniel Maclise.
2. As referenced in Genesis, the Lord told to this patriarch: "Look up at the sky and count the stars-if indeed you can count them." Then he said to him, "So shall your offspring be." (Genesis 15:5 NIV). To whom did the Lord speak this way?

Abram, after acknowledging the Lord as the true God, was renamed by Him as Abraham and his wife Sarai was renamed Sarah. "Abraham" means "Father of Many Nations", while the name Sarah indicates a woman of high rank and importance, such as a princess. Their son was Isaac, whose son, Jacob, received the name Israel from the Lord.
The artwork shown was made by Julius Schnorr von Carolsfield for a 1860 edition of the Bible with pictures.
3. This painting by Rembrandt shows Jacob, also known as Israel, wrestling with an angel. It is known that Jacob wrestled with the angel the entire night, before an important incident in his life. What was that incident?


Answer: His reunion with Esau, his brother.

After leaving Laban's house, Jacob had sent messengers to his brother Esau, so as to inform him on his coming. The messengers came back to Jacob, telling him that Esau was preparing to meet him with an army of 400 men. Jacob anticipated the worst and spent the night wrestling with the angel, asking him to watch over his family. On the next day, Esau met Jacob, but not in battle. The two men embraced each other and agreed to not let past doings affect them from now on.
The painting shown is Rembrandt's "Jacob Wrestling With the Angel".
4. "Shema Yisrael", or "Hear O Israel" is the phrase that composes Deuteronomy 6:4. The phrase was spoken to the Israelites in a repetition of the Law they had received by the Lord. Who, before dying, reminded the Israelites to keep their Commandments?

Moses knew he would not enter Canaan, since he had sinned, when he struck the rock with his staff, instead of speaking to it, as the Lord had ordered. Before dying, Moses spoke to the Israelites and reminded them of the Commandments, before handing over their leadership to Joshua. Hence the name "Deuteronomy", which means "Repetition of the Law".
The painting shown is named "Victory O Lord!" and it was made by John Everett Millais.
5. After his first confrontation with wicked King Ahab of Israel and his wicked queen, Jezebel, prophet Elijah fled, as the Lord commanded him, in the land of Chorath, where he was to be fed by a particular type of birds. Which one?

After the place dried out, God sent Elijah to a widow in Phoenicia. During his stay there, Elijah raised the widow's son from the dead, the first such incident mentioned in the Bible.
After three years of hiding, Elijah returned to Ahab and showed that Baal worship was a sin and that the Lord is the true God.
The painting shown is "Elijah in the wilderness", by Washington Allston.
6. After Elijah was carried to heaven with a whirlwind, Elisha was chosen as his successor. Elisha was the prophet who performed the most miracles in the Old Testament. His mercy and goodness were revered not only to the Israelites, but also to other peoples. For example, Naaman, a foreign general who was cured by Elisha from leprosy. Naaman hailed from which country?

Naaman was a gifted military commander, although a leper. His wife's servant had predicted that a prophet would heal him. When Elisha visited Naaman, he told him to bathe in the Jordan River for seven times. Naaman was instantly healed. Yet, Elisha's servant, Gehazi, tried to obtain money from Naaman. As punishment, the leprosy now plagued him and his descendants.
The painting shown is "Elisha raises son of the woman of Shunem" by Benjamin West.
7. Samuel was the last of the Judges of Israel, as well as the first of the major prophets. His mother, Hannah, was barren for years and she prayed to the Lord to bless her with a child, which she promised to offer to him. But, who was Samuel's father?

After Samuel was born, he was given to the care of the priest Eli of Shiloh. The name Samuel means "Heard of God" or "God has Heard". A minority of Biblical scholars state that Samuel's birth narrative is in fact Saul's and that Deuteronomist historians are to be blamed for the alteration. Yet, the matter is not settled and the theory is disputed.
The painting shown is "Apparition of the spirit of Samuel to Saul" by Salvator Rosa.
8. The story of King David's adultery with Bathsheba, the wife of Uriah the Hittite, is well known. Although David succeeded in having Uriah killed and married the woman he desired, his deeds were not in accordance with the Lord's will. Thus, a prophet was sent to confront David. Who was he?

Nathan told David that his actions were sinful and that his child with Bathsheba would die. Although David repented, the child died soon after being born.
Nathan was once more present in the life of David. When the King was approaching the end of his days, his son Adonijah claimed the throne for himself. Bathsheba and Nathan went to David and persuaded him declare Solomon, his second son with Bathsheba, his heir. And thus it was done.
The painting shown is "King David in Prayer" by Pieter de Grebber.
9. King Solomon was a wise king and this is widely known. A fact about him, lesser known, is that he is said to be the author of three books of the Bible. Which of the following books is NOT attributed to Solomon?

"Numbers" has nothing to do with Solomon. It tells us about the Israelites' enter to Canaan and how the land was divided. Other incidents covered in "Numbers" are the sending of the twelve spies in Jericho and Moses' sin, when he struck a rock instead of speaking to it, as Lord the God commanded.
The artwork shown is "Solomon and the plan for the First Temple", illustration from a Bible card made by Providence Lithography.
10. The story of Daniel in the lions' den is one of the most enthralling in the Bible. The reason Daniel was thrown in the lions' den was the fact that he prayed to the Lord. Yet, who was the king who ordered Daniel be thrown there?

Daniel continued praying to the Lord whilst in the den and he emerged unscathed from it. King Darius, in a fit of rage, ordered the people who cajoled him into throwing Daniel in the den were thrown there themselves and probably devoured by the lions.
The painting shown is "Daniel in the Lion's den visited by an angel" (detail, made by Francois Verdier).
Source: Author DeepHistory 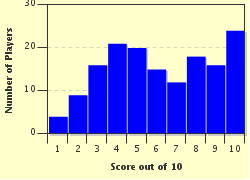 Related Quizzes
This quiz is part of series One More Click!:

Even more photo quizzes for your viewing and playing pleasure!