How odd. Are you certain that this is REALLY in the Bible? Prove it; I need chapter and verse. ...Then I'll believe. (Each question has the version of the Bible used whenever direct quotes are given.)

Quiz Answer Key and Fun Facts
1. In the 9th chapter of Mark, in verses 14-29, we read of an account of a man who was gnashing his teeth and foaming at the mouth. What had caused the man to act this way?


Answer: He had a demonic spirit living in his body

The demon-possessed man had suffered from childhood. Jesus' disciples had been unable to help, and later, they asked Jesus why. According to the King James Version, in the very last verse of this passage He responded, "This kind can come forth by nothing, but by prayer and fasting."
Another interesting point is made in verse 24, when the young man's father said, with tears in his eyes, "Lord, I believe; help thou mine unbelief." This may be taken to mean that although the man had faith in the healing powers of Christ, he wanted more faith to overcome residual doubts. Many Christians believe that all people are born with a measure of faith as indicated in the last part of Romans 12:3: "...according as God hath dealt to every man the measure of faith."
If this is correct, then the father of the demon-possessed man may have been addressing his own lack of faith. Perhaps he had some small amount of faith already, but perceived his need for more.
(Contributed by logcrawler)
2. The Old Testament prophet Ezekiel had some strange visions and experiences. Which of the following actually happened to Ezekiel in one of his visions?


Answer: The Spirit dangled him over Jerusalem by holding onto a piece of his hair

This is found in Ezekiel 8:3. This is the only instance I know of where the Spirit carries someone around by their hair, even in a vision! It must have been a very interesting experience.
(Contributed by JoandMi)
3. When I was a child, my mother often used to say to me: "Be sure your sin will find you out." What is the source for this statement?

It is actually found in Numbers 32:23 (KJV). This quote is used to argue that, although people can often hide wrongdoing from other people, they cannot hide from God.
Perhaps one reason that so many "sayings" can be traced back to the Bible is because, in previous generations, people were generally more familiar with the Bible than many people are today.
(Contributed by cal562301)
4. John the Baptist was definitely a man out of the ordinary. Scripture tells us his clothes were made out of camel hair and he wore a leather belt around his waist. According to Matthew 3:4 (NIV), what unusual food did he eat?

Yes, locusts and wild honey is the correct answer. In addition to having eccentric dress and eating habits, John was a firebrand in attacking the church establishment of the day (the Pharisees and Sadducees), calling them a brood of vipers. He also preached a message of repentance and told the people he had been sent to prepare the way for the Christ.
(Contributed by Cowrofl)
5. In Paul's letter to Titus, Paul writes to a young pastor so as to offer him Christian guidance. Oddly enough, in the first chapter, Paul makes a statement calling all of the people of a certain nation "liars". While this may seem to contradict the sentiment of "love is patient, love is kind", which is read in 1 Corinthians 13:4 (New American Bible), what group of people does Paul seem to insult in Titus 1:10-16?

"A man of Crete, one of their own prophets, has testified 'Cretans have ever been liars, beasts, and lazy gluttons,' and that is the simple truth!" (Titus 1:12-13).

Paul was encouraging Titus to stand fast against "empty talkers and deceivers" (Titus 1:10).

The pagan prophet that Paul refers to here is almost certainly a man named Epimenides. Long before Paul's epistle was written, Epimenides had verbally attacked the people of Crete because many of them had declared that the Roman god Zeus was dead.

The paradox here is that Epimenides himself lived on the island of Crete; so if "all Cretans are liars", that would include himself, making his statement untrue. Today, this is known as the Epimenides Paradox.
(Contributed by star_gazer)
6. What does Deuteronomy 14:26 tell readers to do with wine and strong drink in the King James Version?


Answer: To eat (drink) it before the Lord and rejoice.

Now, that is strange, isn't it? Many modern churches tell us that all Bible references to wine mean grape or fruit juices and don't refer to alcoholic beverages. The argument is that actual alcoholic beverages are referred to as "strong drink" in the Bible (rather than as "wine"), but here we have a reference to the drinking of strong drink being permitted.

This event seems to have been intended as a special allowance for a special purpose. You will need to read the entire chapter to discover what those special reasons were.

In verse 16 we read, "And thou shalt bestow that money for whatever thy soul lusteth after, for oxen, or for sheep, or for wine, or for strong drink, or for whatsoever thy soul desireth: and thou shalt eat there before the Lord thy God, and thou shalt rejoice, thou and thy household."
(Contributed by birdman585)
7. In the King James Version of the Bible, what "magical" animal do we read of in many verses?

In the Old Testament of the King James Version of the Bible, unicorns are mentioned eight times! This is one example:

"But my horn shalt thou exalt like the horn of the unicorn: I shall be anointed with fresh oil." (Psalm 92:10)

Christians believe God's word to be true, and many Christians interpret these "unicorns" as being rhinoceroses or another type of single-horned animal, while still others believe that these "unicorns" mentioned in the Bible may now be extinct. This may also be interpreted as a type of metaphorical allusion.
(Contributed by star-gazer)
8. "Do not think that I came to bring peace on earth. I did not come to bring peace, but a sword." Who made this seemingly surprising statement? Matthew 10:34 (New King James Bible)

After choosing the twelve apostles, Jesus began to teach them about the nature of the ministry they would be carrying out. Jesus wanted the apostles to understand that the message that they would be preaching would not be popular and they might be rejected even by their own families.

Jesus went on to say, "For I have come to set a man against his father, a daughter against her mother, and a daughter-in-law against her mother-in-law"; and "A man's enemies will be those of his own household." (Matthew 10:35-36)
(Contributed by wordwalker)
9. In what book of the Bible does a donkey talk?

"And the donkey said unto Balaam, 'Am not I thine donkey, upon which thou hast ridden ever since I was thine unto this day? Was I ever wont to do so unto thee?'" (Numbers 22:30).
(Contributed by star_gazer)
10. Was there ever a time where the sun stood still in the Bible?

The sun stood still when the Israelites, led by Joshua, helped the Gibeonites when the Kings of Jerusalem, Hebron, Jarmuth, Lachish and Eglon joined forces and attacked them with all of their armies. The story can be found in Joshua 10:1-28.

The Bible states that the sun stood still, but, it could have been the Earth standing still as well.
(Contributed by J-Zilch.)
Source: Author logcrawler 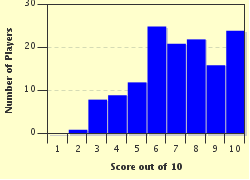