The Bible makes reference to many of our body parts more times than we imagine. This quiz focuses on what the Bible says about the eyes. (King James version used.)

Share on Facebook
Share on Twitter
Share by E-Mail
Author
Verne47
Time
4 mins
Type
Multiple Choice
Quiz #
380,118
Updated
Aug 01 22
# Qns
10
Difficulty
Average
Avg Score
6 / 10
Plays
213
This quiz has 2 formats: you can play it as a or as shown below.
Scroll down to the bottom for the answer key.

Quiz Answer Key and Fun Facts
1. Which Biblical king declared that he would set no wicked thing before his eyes? (This must have been after he set another man's wife before his eyes and got into trouble.)

According to Psalms 101:3 King David spoke these words: "I will set no evil thing before mine eyes, I hate the works of them that turn aside; it shall not cleave to me." Evidently, David was a transformed man after the episode in his life when he set his eyes on Bathsheba, Uriah's wife, and decided to have her for himself.

He instigated Uriah's death and Nathan, the prophet was sent to him to make him aware of God's displeasure (II Samuel 11 & 12). His prayer for the remission of his sins can be found in Psalms 51.

In Psalms 101 David makes his vow and profession of godliness.
2. "The light of the body is the eye: if therefore the eye be ____ thy whole body shall be full of light." Which word completes the quote in the KJV?

The Sermon on the Mount is recorded from Matthew 5-7. According to chapter 6:22-23, Jesus explained to the multitude that it is from the eye that the body gets its light, so if the eye is single the whole body will be full of light. On the other hand, he pointed out that if the whole eye is evil (defective) the whole body would be full of darkness.

He further declared that, if the light that they had was actually darkness, then that darkness would be very great.
3. Which prophet prayed, "Lord open his eyes that he may see", and when the young man in question opened his eyes he was able to see horses and chariots of fire around the prophet?

He was afraid and wanted to know what they would do. Elisha told him not to fear as they that were with them were more than those who were with their enemies.

It was at this point that Elisha asked the Lord to allow his servant to see. (II Kings 6:8-23)
4. "The hearing ear and the seeing eye God made both of them." In which book of the Bible would you find this text?

The book of Proverbs contains wise sayings from Solomon, the son of King David. The last two chapters of Proverbs are attributed to other writers. The quotation can be found in Proverbs 20:12.
5. Mark 8 records Jesus' healing of a blind man by spitting on his eyes. What did the blind man see when he looked up the first time?

As Jesus entered Bethsaida, a blind man brought to Him for healing. He took him out of the town, spit on his eyes, laid His hands on him and asked him if he was seeing as he should. The blind man then looked up and said that he saw men as trees walking. Jesus then put his hands on his eyes again and made him look up. He was then able to see every one clearly. (Mark 8:22-25)
6. According to Matthew 5:29, what should you do if your right eye offend you?


Answer: pluck it out

In His discourse on the mount, Jesus instructed the multitude on a number of issues. Matthew 5:29 is rather sobering. Jesus pointed out that if the right eye offends an individual, he should pluck it out since it would be better to lose one part of the body than for the entire body to perish in hell. Jesus here taught how important it is for persons to be saved. Nothing should be more important to individuals than the acquisition of eternal life.
7. Which patriarch noted for his patience declared: "I myself will see God with my own eyes - I and not another."

The story of Job is well known. The book of Job tells the story of this patriarch who served God so well that God pointed him out to Satan as one who feared Him and refrained from doing evil. When God permitted Satan to touch Job's body, Job was covered with boils from his head to his feet.

In verses 25-27 of Job 19, Job declared his belief in the resurrection. He confidently stated that he knew that his redeemer lived, and that even though worms should destroy his flesh he would see God for himself with his own eyes.
8. "Lord now lettest thou thy servant depart in peace according to thy word for my eyes have seen thy ___." (Luke 2:29-30) What word completes the quotation?

At eight days old Jesus was taken to the temple to be presented to the Lord. Simeon, a devout man filled with the Holy Ghost, who was looking forward to the coming Messiah, came into the temple. When Jesus was brought into the temple by His parents, Simeon took Him in his arms and said: "Lord lettest now thy servant depart in peace according to thy word for my eyes have seen thy salvation which though hast prepared before all people, a light to lighten the Gentiles and the glory of thy people Israel. Joseph and Mary marvelled at the words of Simeon. (Luke 2:25-33)
9. Which prophet who saw dry bones in the valley said: "They have eyes to see but do not see and ears to hear but do not hear, for they are a rebellious people?

Ezekiel 12 foreshadows the captivity of King Zedekiah. Israel would be punished for their rebellion against God. Ezekiel was told that he was living in the midst of a rebellious people who had eyes to see but would not see and ears to hear but would not hear.

He was to behave like a person who was going into captivity so that the people, although rebellious, would be able to see what was going to happen to them. (Ezekiel 12:1-5)
10. What is pronounced by Isaiah on those who are wise in their own eyes and clever in their own sight?

In Isaiah 5 the prophet pronounces God's judgements on various sins. In verse 20 Isaiah pronounces a woe on those who call evil good and good evil, as well as those who put darkness for light and light for darkness. There is also a woe for those who put bitter for sweet and sweet for bitter.

In verse 21 Isaiah also has a woe for those who are wise in their own eyes and prudent in their own sight.
Source: Author Verne47

This quiz was reviewed by FunTrivia editor looney_tunes before going online.
Any errors found in FunTrivia content are routinely corrected through our feedback system.
Most Recent Scores
Dec 31 2022 : Guest 99: 7/10
Dec 03 2022 : Guest 66: 7/10 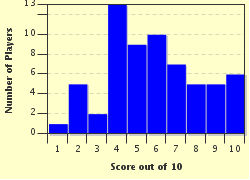