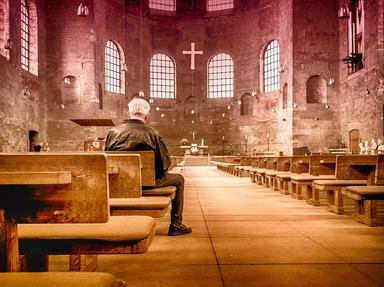 Who Said These Words? Trivia Quiz

Some people unknowingly or maybe knowingly quote scriptures when they speak. Here are some of our favorite quotes and sayings. Tell me, who said these words in the bible? I've used the KJV, unless otherwise stated.

Quiz Answer Key and Fun Facts
1. After a storm, electricity may be disconnected to prevent damages. Some people light candles and utter the words, "let there be light" as comforting words. In the book of Genesis, chapter 1 verse 3, someone said the words, "Let there be light". Who said those words?

God said these words in Genesis chapter 1 verse 3. These events were part of the creation story. Here is an excerpt of the story (NIV translation):
'And God said, "Let there be light," and there was light. God saw that the light was good, and He separated the light from the darkness. God called the light "day," and the darkness he called "night." And there was evening, and there was morning -- the first day.'
2. Going to a function recently, the host urged everyone to "Eat, drink, and be merry". There are several references in the Bible using those words. In Luke chapter 12, verse 19, who said these words?

Jesus said these words when he was sharing the parable of the rich fool. Here is the story found in Luke 12:16-21 (NIV):

'And he told them this parable: "The ground of a certain rich man produced a good crop. He thought to himself, 'What shall I do? I have no place to store my crops.' "Then he said, 'This is what I'll do. I will tear down my barns and build bigger ones, and there I will store all my grain and my goods. And I'll say to myself, "You have plenty of good things laid up for many years. Take life easy; eat, drink and be merry."' But God said to him, 'You fool! This very night your life will be demanded from you. Then who will get what you have prepared for yourself?' This is how it will be with anyone who stores up things for himself but is not rich toward God."'
3. At a recent wedding, the minister ended by saying, "What therefore God has joined together, let not man put asunder" or separate. Who said "What therefore God hath joined together, let not man put asunder" in Matthew chapter 19 verse 6?

The Pharisees were asking Him about divorce. Here is an excerpt of the story.

'Some Pharisees came to him to test him. They asked, "Is it lawful for a man to divorce his wife for any and every reason?"

'"Haven't you read," he replied, "that at the beginning the Creator made them male and female, and said, 'For this reason a man will leave his father and mother and be united to his wife, and the two will become one flesh. So they are no longer two, but one. Therefore what God has joined together, let man not separate."

'"Why then," they asked, "did Moses command that a man give his wife a certificate of divorce and send her away?"

'Jesus replied, "Moses permitted you to divorce your wives because your hearts were hard. But it was not this way from the beginning. I tell you that anyone who divorces his wife, except for marital unfaithfulness, and marries another woman commits adultery."'
4. Recently, I heard a new father lovingly refer to his baby daughter as the "apple of my eye". In the Bible, in the book of Zechariah chapter 2 verse 8, mentions "the apple of his eye". Who said those words?

Zechariah was speaking the words of God at the time. Here is the excerpt from Zechariah 2:8-9:

'For this is what the LORD Almighty says: "After he has honored me and has sent me against the nations that have plundered you--for whoever touches you touches the apple of his eye. I will surely raise my hand against them so that their slaves will plunder them. Then you will know that the LORD Almighty has sent me."'
5. One of the most popular sayings about a habitual abuser is "Can a leopard change his spots?" Who said these words in Jeremiah chapter 13 verse 23?

Jeremiah said these words, because God told him to. Here is an excerpt (Jeremiah 13:23-25):

'Can the Ethiopian change his skin or the leopard its spots? Neither can you do good who are accustomed to doing evil. "I will scatter you like chaff driven by the desert wind. This is your lot,the portion I have decreed for you," declares the LORD, "because you have forgotten me and trusted in false gods."'
6. To prevent her curious son from asking embarrassing questions, a friend said that her neighbor's friend "gave up the ghost". In the Bible there are several references using that statement, but in John chapter 19 verse 30, Christ gave up the ghost. Who, traditionally, was responsible for those words in John?

John told the story of Christ's crucifixion. Here is an excerpt from the King James Version (John 19:28-30):

'After this, Jesus knowing that all things were now accomplished, that the scripture might be fulfilled, saith, "I thirst". Now there was set a vessel full of vinegar: and they filled a spunge with vinegar, and put it upon hyssop, and put it to his mouth. When Jesus therefore had received the vinegar, he said, "It is finished": and he bowed his head, and gave up the ghost.'
7. Standing near a watercooler, I overhead someone talking about a coworker who was "a thorn in the flesh". Who mentioned those words in 2 Corinthians chapter 12 verse 7?

Here is the scripture passage 2 Corinthians 12:3-7, traditionally credited to Paul:

'And I knew such a man, (whether in the body, or out of the body, I cannot tell: God knoweth;) How that he was caught up into paradise, and heard unspeakable words, which it is not lawful for a man to utter. Of such an one will I glory: yet of myself I will not glory, but in mine infirmities. For though I would desire to glory, I shall not be a fool; for I will say the truth: but now I forbear, lest any man should think of me above that which he seeth me to be, or that he heareth of me. And lest I should be exalted above measure through the abundance of the revelations, there was given to me a thorn in the flesh, the messenger of Satan to buffet me, lest I should be exalted above measure. For this thing I besought the Lord thrice, that it might depart from me.'
8. Our local radio station had a call-in request program. Someone requested Michael Jackson's "Heal the World". The line "... nations turn their swords into plowshares", stuck with me because it is mentioned in the Bible. In what book of the Bible is this found? The name of the book and the author is the same.

Isaiah chapter 2 verse 4 has these words. Here is the excerpt:

"He will judge between the nations and will settle disputes for many peoples.
They will beat their swords into plowshares and their spears into pruning hooks.
Nation will not take up sword against nation, nor will they train for war anymore."
9. Talking about a car accident that he was involved in, a friend said, "I escaped serious injury by the skin of my teeth". A famous man in the Bible uttered the words "skin of my teeth". This man was famous for his patience and his refusal to "curse God and die". Who said these words?

When Job was going through his trials, he uttered those words in Job chapter 19. Here is an excerpt.

'All my close friends abhor me,
And those whom I love have turned against me.
My bone clings to my skin and to my flesh,
And I have escaped by the skin of my teeth.
Have pity on me, have pity on me, O you my friends,
For the hand of God has struck me!'
10. Recently, someone came to me with a donation sheet and asked me if I could contribute to their religious cause. At the end of the month, with all my bills due, I gave a very small donation. The individual looked at me in disgust and said, "Don't you know its better to give than to receive"? Whom was she quoting from Acts chapter 20 verse 35?

She was paraphrasing the apostle Paul when he said, "I have shewed you all things, how that so labouring ye ought to support the weak, and to remember the words of the Lord Jesus, how he said, It is more blessed to give than to receive."
Of course, if my contribution had been larger, she might have said something else.
Source: Author chrissie25 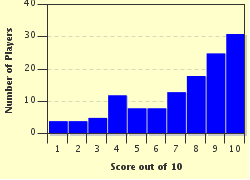 
Other Destinations
Explore Other Quizzes by chrissie25

More Who Said It? Quizzes