This quiz is based on a lecture I had as part of an Astronomy module called Life and Death of Stars. It is a Level 1 university course. Good luck and have fun playing!

Quiz Answer Key and Fun Facts
1. What is a binary system?


Answer: Two stars which orbit a common center of gravity

In a binary system, two stars orbit each other due to a common gravitational center, which is dependent on the mass on the stars.

When two stars appear close together in the sky, the situation is known as an "optical double". This means that although the stars are aligned along the same line of sight, they may be at completely different distances from us. This occurs in constellations; however, two stars in the same constellation can also be part of a binary system.
2. Which of these is NOT a type of binary system?

Photometric binaries are also called eclipsing binaries.
3. A visual binary is one in which the binary system can be seen as two separate points of light. Which instrument is most useful when determining a visual binary?

Candidate visual binaries are viewed and studied with a telescope, normally over decades, and even over centuries. Using photographs, an astronomer can determine whether it is a visual binary or an optical double by studying the orbital path of the stars.
4. While Sirius can now be studied as a visual binary, this was not always the case.

This is true. When it was discovered in 1844 by the German astronomer Bessel, the Sirius system was classed as an astrometric binary, because the companion star, Sirius B, was too faint to be seen.
Bessel, who was also a mathematician, determined by calculations that Sirius B existed after observing that the proper of Sirius A (the main star) followed a wavy path in the sky, rather than a uniform path.

Sirius can now be studied as a visual binary because, with improving technology and therefore improved telescopes, Sirius B was able to be seen, although not for 20 years after Bessel had correctly predicted its existence.
5. Spectroscopic binaries are revealed thru spectral analysis, as the name suggests. Two spectra are exhibited (although sometimes only one spectrum can be observed) and the shift of the spectral lines toward either red or blue tells us whether the stars are moving toward or away from the observer. What are these distinctive frequency shifts called?

The Doppler effect (also called Doppler shift) was named after the Austrian mathematician and physicist Christian Doppler, the man who discovered it. The effect is due to the frequencies of waves changing for an observer relative to the source of the waves.

You can experience it for yourself using sound waves, by listening as vehicles drive past you. The effect is especially evident if the vehicle has a siren.
6. For eclipsing (photometric) binaries, using the eclipse information can yield the radii of the two stars, despite the system appearing as a single star.

Eclipsing binaries are actually a subclass of spectroscopic binaries, although they are normally regarded as a separate category.
7. Which of these is a quadruple binary system, consisting of a visual binary, of which each of the stars is itself a spectroscopic binary?

Mizar is the second star from the end of the Big Dipper's handle, and is known as Vasistha in Indian astronomy. Mizar A was the first spectroscopic binary to be discovered, by Edward Pickering in 1889.
8. The mass of a star (stellar mass) can only be investigated for stars of binary systems. If the mass is known, the radius and luminosity can be worked out. Which of these answers correctly states both the mass-radius and mass-luminosity relationships? (prop) means here "is proportional to", and "lum" stands for "luminosity".

The answer is Mass (prop) radius, and Mass (prop) luminosity^4. To better illustrate these relationships, here are two examples.

As demonstrated by these examples, you can see that a relatively small difference in mass gives a relatively large difference in luminosity.
9. In some binary systems, the mass of one star can be transferred to and accumulate on the surface of the companion. When the mass builds up to a certain limit, the star can explode in a nova or even a Type 1a supernova. Which type of star would the companion be to allow for these explosions?

White dwarfs are composed of what is called electron-degenerate matter. This means that the matter is compressed so far that each electron shell is full starting from the inwards and coming out. The matter is supported by electron-degeneracy pressure and withstands further compression. These stars are very dense; they are approximately the size of the Earth, but have approximately the mass of the Sun.

When a star in a binary pair is a white dwarf, mass from the larger star is transferred to and accumulates on the surface. Eventually this mass heats up and explodes brightly. The mass is scattered into space. This is called a nova. Novae can reoccur.

Supernovae occur in the same way, however the difference is that when the mass on the white dwarf exceeds the mass that electron-degeneracy pressure can support (approx. 1.4 solar masses, called the Chandrasekhar limit), the carbon core of the white dwarf collapses and heats up, reaching the temperature for carbon fusion, the carbon burns explosively, and the star matter is ejected into space. This is the death of the star.
10. Final question: Can a member of a binary system be a black hole?

The answer is yes. The term "binary system" is not used exclusively for star systems, but also for planets, asteroids, and galaxies which rotate around a common center of gravity.

However, this is not a trick question; even in star binaries, the companion can be a black hole. An example of this is Cygnus X-1.

I hope you enjoyed my quiz. Please remember to rate, and thanks.
Source: Author reeshy 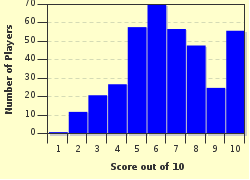 Related Quizzes
This quiz is part of series My Science Quizzes:

A collection of the science quizzes I've written, mainly based on my studies of anatomy and biomedical science. Enjoy! Evander.


Other Destinations
Explore Other Quizzes by reeshy