There are a lot of different types of memory inside your computer. Test your knowledge of some memory basics!

Quiz Answer Key and Fun Facts
1. The moment you turn on your computer, it begins to access its memory. BIOS, the software that boots up your computer, is located in which type of memory?

ROM stands for read-only memory because it cannot be changed or requires special operations to make changes to it. This type of memory storage is permanent and non-volatile, meaning that it is not deleted or lost when the computer shuts off. Once you start your computer, it accesses the ROM to start running BIOS (basic input/output system).
2. When looking at your computer's memory, you will come across the storage hierarchy, which separates storage into primary, secondary, and tertiary. Primary storage refers to memory that is directly accessible to the CPU. What is another name for primary storage?

Your computer's main memory or internal memory includes cache and RAM, which are temporary storage areas that hold data while it is being used. Because this type of memory only holds what is being used at the moment, it is faster than permanent storage, such as ROM.
3. Computer memory can be referred to as either permanent or temporary. Of the following, which one is NOT a temporary storage area?

The hard drive is a secondary storage device and is a form of permanent storage. The hard drive is made up of rotating discs called platters. These platters are covered with a magnetic material and magnetic heads in the hard drive are used to write the data onto the discs.
4. A computer's cache will hold data that is used most often to make it faster to access. There are various levels of cache, the first of which is a small amount of memory found inside the what?

The cache helps to make up for the lag between how long it takes memory to go from the memory modules to the CPU and how fast the CPU processes that data. Since it takes longer for the information to travel, the cache allows the CPU to access the information it uses most at a faster rate.
5. RAM stands for random access memory and it can be static (SRAM) or dynamic (DRAM). SRAM stores a bit of data using which type of circuit?

SRAM is usually faster than DRAM because the flip-flop circuit allows the information to stay intact without being constantly refreshed, but it is also more expensive. In many computers, SRAM is the type used inside the central processing unit (CPU).

A flip-flop circuit can also be called a latch, and is made up of two identical halves. While one half is on, the other half is off, which is where the term flip-flop comes from.
6. The memory stored in the capacitor in a DRAM circuit has to be constantly refreshed, and this happens several times in a second. Why does it have to refresh so many times?

Flash memory is found in all types of memory cards: for computers, cameras, video games, etc. It is also found in USB flash drives and memory sticks. This type of memory is non-volatile, meaning it doesn't get erased when the power is turned off. It is also known as solid state storage because it is entirely electronic and there are no moving parts.
8. Virtual memory acts like RAM, but it is actually a process or program that creates a paging file to move items from RAM into that file. Where does it create the paging file?

The virtual memory will move files or portions of programs that haven't been used very much to a file on the hard disk. This frees up RAM for use and actually gives you the ability to use more memory than you actually have. Even though it uses the hard drive to create the paging file, virtual memory is still volatile and will be deleted when the computer is shut off.
9. Secondary storage, like the hard drive, isn't directly accessible to the CPU like primary storage. What is another name for secondary storage?

Many hard drives are used as secondary storage. Flash memory drives and floppy disks are also types of auxiliary storage.
10. Data can come from information stored in the computer's permanent storage, or it can come from peripheral devices, such as keyboards. Regardless of whether it is input through a peripheral device or taken from storage, which type of memory does most data go through first?

RAM is temporary storage, but it can be accessed directly by the CPU and is faster than ROM. Also, RAM allows you to read/write data, meaning you can make changes, save, and delete the information. ROM is generally used for storing information necessary for booting up the computer and ensuring it runs properly.
Source: Author tiffanyram 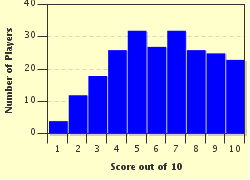 A list of my quizzes from the FunTrivia Sprint (2012)


1. Mammas of the Animal World Average
2. Computer Memory Average
3. There's Too Much Radon! Average
4. Love Is a Four Letter Word Average
5. Bad People Can Do Good Things Average
6. The Cross Average
7. Singing Like a "Rockstar" Tough
8. Arctic Alaska Average
9. Run Synonyms with Missing Letters Easier
10. Not What I Had in Mind Average
11. The Dilettante's Guide to 1990s Music Average
12. Camelids Mixture Average