Five Plus Two is What? Trivia Quiz

Five plus two is obviously seven, but what other numbers can we make from five and two?

Quiz Answer Key and Fun Facts
1. First, let's explore addition a bit more. 5+2 = 2+5 = 7 So, the order of the numbers doesn't matter with addition. What is this property called?

Addition is commutative, as is multiplication. It is also associative, which means the order is irrelevant no matter how many numbers you add.

With subtraction of two numbers, the order does matter but changing the order just changes the sign (positive/negative) - their absolute values (distance from 0) are the same. For example, 52−25 = 27, but 25−52 = -27. These numbers (27 and -27) have the same "absolute value", which just means that ignoring the sign, they are both 27.
3. Multiplication of five and two yields ten. What relation are five and two to ten?

Prime factors are just factors that are also prime numbers (numbers which have no further factors other than one and itself). For instance, the prime factorisation of 52 is 2x2x13 (2^2 x 13).
4. Division is the opposite of multiplication: order matters, so using the numbers five and two we can make either 2.5 or 0.4 with division. Which of these signs cannot be used for division?

2/5 = 0.4 uses a forward slash to denote division. A "vinculum" is a line, with one number on top of one another, often used to represent fractions. An "obelus" is a line with a dot above and beneath it, which looks like this: ÷
5. Using this operation, we can get the numbers 25 or 32 from five and two. What is it?

Exponentiation uses "powers": the power is usually written as a superscript to the right of the base, but on computers the caret (^) symbol can be used.

A radix symbol is used for a square root, but other roots need the degree number superscripted. As with exponentiation, only two and three have their own names: it goes "square root", "cube root", "fourth root" etc.

Logarithms is the other opposite of exponentiation. A logarithm yields the power of x that will make y.

The modulo operation finds the remainder. If we were doing 5 divided by 2, we would get two and a remainder of 1. Another way of looking at this is that you repeatedly subtract 2 from 5, until you get to a number smaller than the modulo (two): 5−2 = 3; 3−2 = 1, so 1 is the answer.

Tetration is repeated exponentiation, that is to say, if we have x^^2 (x to the tetrated two), that is equal to x^x (x to the power of x).

The last digit (the equivalent of base 10's units column) is worth 1, the second-to-last is worth 2, the anti-penultimate 4, the next 8 etc. If the value in that position is a "1", you add the value of the position. If not, the number doesn't change.

Computers use binary, because it is easy to transfer knowledge like this. A "1" can be represent by a pulse or a light or anything, and a "0" is no pulse/light etc. Although it needs more bits of information than decimal systems do, you can still get quite a lot of information across in binary. There are over 1 million combinations of 20-digit binary numbers (2^20 = 1,048,576).
Source: Author AdamM7 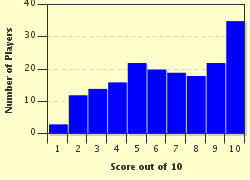 Related Quizzes
This quiz is part of series All About Numbers:

A set of quizzes about numbers and the people who investigate them.


Other Destinations
Explore Other Quizzes by AdamM7