This quiz consists of a few questions about one of baseball's most beloved parks.

Quiz Answer Key and Fun Facts
1. The week that saw the opening of Fenway Park, also saw which of the following take place?


Answer: The sinking of the Titanic

The news that the Titanic had been sunk (April 14, 1912), was likely still a hot topic when Fenway Park first opened its' doors on April 20, 1912. Ted Williams had been born August 30, 1918, Yankee Stadium was opened April 18, 1923, and the D-Day Invasion began June 6, 1944. As a sidebar, Detroit's Tiger Stadium opened the same day as Fenway.
2. On October 21, 1975, Carlton Fisk provided Red Sox fans with one of their most exciting moments, when he hit a home run to win game six of the World Series. Which team fell victim to Fisk's blast?

Fisk had to "wave the ball fair" in the 12th inning of game six against the Reds. The National Leaguers had the last laugh however, as Cincinnati went on to win game seven and the series.
3. Which of the following streets can be found behind the Green Monster in left field?

Balls that clear the new "monster seats" in left field of Fenway Park, land on Lansdowne Street. If the other three answers reminded you of baseball, it is likely because they are outside Wrigley Field in Chicago.
4. The foul pole in right field, takes its nickname from which former Red Sox player?

Former Red Sox star Johnny Pesky was a player of much talent, but little power. In 2003, "Pesky's Pole" stood 302 feet from home plate, making it an inviting target for those not noted for hitting home runs.
5. Which of the following Red Sox greats does not have his uniform number retired in Fenway Park?

You may think that 511 career wins deserves having your number retired, but you have to wear a number first. When Cy Young played, players didn't wear numbers on their uniforms. 2003 saw Fenway have six numbers retired: 1 Bobby Doerr, 4 Joe Cronin, 8 Carl Yastrzemski, 9 Ted Williams, 27 Carlton Fisk, and of course 42 Jackie Robinson (retired in all MLB).
6. Who was the first player to blast a 500ft home in Fenway?

The story goes that Williams' 502 foot shot, crashed through the straw hat of a Yankees fan sitting in the right field bleachers. The newspaper reporters interviewing the man (after he woke up), asked if he would consider switching his allegiance to the Sox after being hit.

He said that perhaps this was a sign and yes he would. Headlines the next day read, "Williams Knocks Sense Into Yankees Fan".
7. Which of the following could be found on the Green Monster in 2003?


Answer: The letters TAY and JRY written in Morse code

TAY and JRY are the initials of former Red Sox owner Tom Yawkey and his wife Jean. They are written on the scoreboard in Morse code. The retired numbers are located on the facing of the upper deck in right field.
8. How tall was the Green Monster in left field in the 2003 season?

The green monster was 37 feet tall. Fenway's center field wall is 17 feet tall.
9. Fenway Park used to have a sloping field, running up to the centerfield fence?

Between 1912 and 1933 such a slope did exist. It was given the nickname "Duffy's Cliff" after Red Sox left fielder Duffy Lewis. Lewis had become skilled at running up the slope to make plays.
10. There was never been a nine-inning perfect game pitched at Fenway Park, thrown by one pitcher in the 20th century?

It's true, Fenway Park had never seen a perfect game. It came close however one day in 1917. Babe Ruth started for the Red Sox and walked the first batter. Upset with the ball-strike calls, Ruth argued with the umpire and got tossed out of the game. Ernie Shore took over on the mound and the runner who had been walked tried to steal second.

He was thrown out by the catcher and Shore then retired the next 26 batters he faced.
Source: Author lloyd_taggart 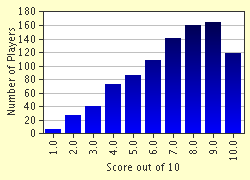 
Other Destinations
Explore Other Quizzes by lloyd_taggart