An easy quiz about the nationalities of the 2005 Formula One drivers. Good luck and enjoy!

Quiz Answer Key and Fun Facts
1. Which of these drivers is not from Germany?

The Schumacher brothers are from Kerpen, Heidfeld is from Monchengladbach and Klien is Austrian.
2. Which of these drivers is not Brazilian?

Barrichello and Massa are from Sao Paulo, Zonta is from Curitiba and Montoya is Colombian.
3. Which of these drivers is English?

Button is from Frome, Somerset. Coulthard is from Twynholm in Scotland, Webber is from Queanbeyan in Australia, and Albers hails from Holland.
4. Narain Karthikeyan became the first driver to race from which country?

Karthikeyan is from Madras, and is the first Indian F1 driver.
5. Tiago Monteiro is from Portugal.

Monteiro is from Oporto and has previously raced in Champ Cars.
6. Where is Takuma Sato from?

Sato is from Tokyo and is the most successful Japanese driver ever. He has a best result of 3rd place, attained at Indianapolis in 2004.
7. Where is Patrick Friesacher from?

Patrick was born in Wolfsberg. He was an F3000 stalwart and won many races, but could never crack the title.
8. Jarno Trulli and Giancarlo Fisichella are both Swiss.

Trulli is from Pescara, Italy, and enjoys making fine wines. Fisichella is a Roman.
9. Where is Kimi Raikkonen from?

Despite his nickname of 'The Iceman', Kimi is from Espoo, Finland. The nickname refers to his ability to cope with extreme pressure.
10. Where is Jacques Villeneuve from?

Villeneuve is from St. Jean Sur Richelieu in Quebec. Villeneuve was the 1997 F1 champion, driving for Williams-Renault. He qualified on pole-position for his first race in Melbourne 1996. JV was also the 1995 Indy 500 winner and Champ Car champion.
Source: Author Blaynos

This quiz was reviewed by FunTrivia editor gtho4 before going online.
Any errors found in FunTrivia content are routinely corrected through our feedback system.
Most Recent Scores
Dec 02 2022 : Guest 2: 6/10
Dec 01 2022 : Guest 81: 10/10 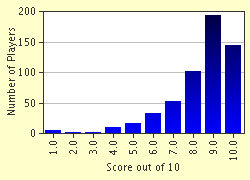 Related Quizzes
1. Mixed Up Formula One Drivers Average
2. F1 Nationalities: Past and Present Average
3. Formula 1 Drivers 1995-2005 Very Difficult
4. F1 Fathers and Sons Average
5. Dead on the Track Average
6. F1 Drivers: The Also-Rans Difficult
7. Where Did They Come From? Difficult
8. British F1 Drivers - Race Winners Average
9. F1 Drivers - Where Are They From? [2] Tough
10. In pursuit of Number One Average
11. So Near, Yet So Far Tough
12. They Gave Their All Tough


Other Destinations
Explore Other Quizzes by Blaynos