This is a quiz about the many Australian rugby league players that have played first grade for at least 5 different clubs.

A multiple-choice quiz by Fi B. Estimated time: 4 mins.

Quiz Answer Key and Fun Facts
1. At which did Brett Kimmorley win a Clive Churchill medal? 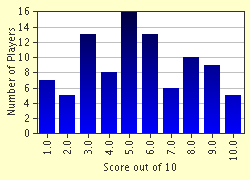