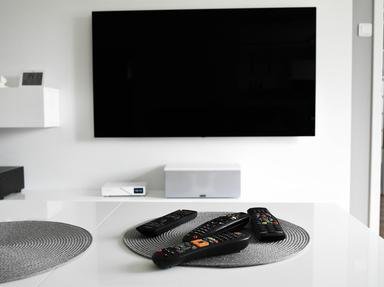 "Black Mirror" is a modern take on "The Twilight Zone". Each episode is a stand-alone story. They're also on the more mature themes, so viewer discretion is advised. This quiz is about the pilot episode, "The National Anthem".

Share on Facebook
Share on Twitter
Share by E-Mail
Author
TonyTheDad
Time
4 mins
Type
Multiple Choice
Quiz #
391,812
Updated
Dec 03 21
# Qns
10
Difficulty
Average
Avg Score
7 / 10
Plays
154
This quiz has 2 formats: you can play it as a or as shown below.
Scroll down to the bottom for the answer key.

Quiz Answer Key and Fun Facts
1. In which country is "The National Anthem" set?

Netflix purchased the program in 2015. Subsequent episodes were based in the United States and Iceland.
2. The story revolves about the kidnapping of one of the royal family. Which royal family member is kidnapped?

The story centers around the kidnapping of a Princess Susannah, of the British royal family.
3. Instead of money, the kidnapper asks for the Prime Minister to do this for "ransom".


Answer: They hire an actor.

They hired an actor, who was going to wear a green-screen hood over his face so that special effects could be used to paste in the prime minister's face.

Waiting until the final hour, the prime minister finally capitulates. He takes a dose of Viagra and does the unspeakable act.
7. When does the kidnapper release the royal family member?


Answer: He releases his captive half an hour before the prime minister actually "pays".

The kidnapper releases a drugged princess in the middle of the London Millennium Footbridge, a half-hour before the PM "pays". He then presumably goes back to his apartment and commits suicide.

After she's found, the PM's staff is informed. However, they hold off from telling him. After he pays, the prime minister spends quite a while in the bathroom vomiting and retching.
8. Is the kidnapper captured alive?


Answer: No, he is found dead in his apartment, by suicide.

The kidnapper kills himself after he releases the princess, unharmed, on the London Millennium Footbridge.
9. Who was the kidnapper?


Answer: A performance artist whose "work" is a statement on the people's obsession with the media.

A lot of effort for an "art" piece that he won't be able to discuss with anyone.
10. A year later, which of the following is the negative consequence of the whole kidnapping?


Answer: The prime minister's wife becomes very distant to him in private, though maintaining a good public image

In the denouement, the prime minister is shown making public appearances with his wife. He's in a good mood, and the news anchors are mentioning his public opinion ratings are at a high. The Princess Susannah is married and expecting a baby.

However, when the prime minister and his wife get to 10 Downing Street, she walks away from him and coldly walks upstairs without him. It's apparent that they are only putting on a happy face for the public, that their marriage has been corrupted by the unspeakable act he committed to save a life.
Source: Author TonyTheDad


Other Destinations
Explore Other Quizzes by TonyTheDad