In this quiz, I give you a common quote or catchphrase from "Dad's Army", and you have to say which character is associated with saying that quote.

Mainwaring would often say this to Private Pike on numerous occasions, usually when Pike had suggested a bad idea or whenever something Pike did humiliated Captain Mainwaring, or got him into trouble. As Pike was Mainwaring's clerk at his bank, he would say this phrase often, and few episodes would go by when Mainwaring wouldn't say those three words to the young Pike.

He first said this in the very first episode of Dad's Army, "The Man And The Hour".
2. Which member said, "We're doomed, sir. Doomed!"

The dour Fraser would quite often say these words, or words quite similar, whenever the Home Guard of Walmington-on-Sea found themselves trapped in a very bad situation, such as in the episode "Time On Our Hands", when the platoon were trapped at the top of the clock tower with a German parachutist. Fraser was very much portrayed as a stereotypically dour Scotsman throughout the show. Fraser was an undertaker, which only served to hammer home his reputation, and he would often delight in any sticky situations Mainwaring found himself in.

This includes the time that the platoon found themselves trapped in the local pumping station underground (in "Asleep In The Deep"), with the water flowing into the room they found themselves in.
3. "Do you think that's wise, sir?"

Wilson was Captain Mainwaring's right-hand man at the bank and in the platoon. He would often interrupt Mainwaring with this phrase whenever Mainwaring suggested any idea, mostly ridiculous ideas. Wilson is portrayed more as a loyal servant, but a servant who wishes to exert as little physical work as possible.

At times, it is clear that the platoon have a lot more respect for Wilson than Mainwaring. One use of the phrase can be found in the episode, "If The Cap Fits", when Mainwaring suggested handing over control of the platoon temporarily to Private Fraser.
4. "Don't panic! Don't panic"

Corporal Jones is the loyal third man in command of the Home Guard. This catchphrase became one of the most associated phrases with Dad's Army, and was uttered whenever the platoon were in grave danger, such as when a mine was found underneath the pier that they were on. Jones was a butcher in the day, and was often seen to be extremely loyal and keen, but often very clumsy and incapable.
5. "Do you think I could be excused sir?"

Another very loyal servant, Private Godfrey is a retired member of the Home Guard who specialises in First Aid matters. He is portrayed as an effective member of the platoon, but he has a bladder problem, which means that he frequently mentions having to be excused, and often makes comments about his problem throughout the programmes, particularly when the platoon have had a long day. Godfrey also often attends 'the clinic', and is the only main member of the platoon who is retired, even though Jones is older.

In one episode, he was considered to be a 'conchie' in the First World War, but it later emerged that he had actually saved many lives in the War. An example of Godfrey saying this quote came in the episode, "The King Was In His Counting House", after a long night for the platoon counting money from Mainwaring's bank.
6. "I was wondering who'd be the first to spot that."

As the Walmington-on-Sea platoon would often get themselves into trouble, various ideas were suggested to get themselves out of the situation. Mainwaring would often suggest an idea, before another member of the platoon (often Wilson) would state a problem with the idea, leading Mainwaring to say something like "I was wondering who'd be the first to spot that".

This happened in the episode "Time On Our Hands", when he suggested that they could use a rope attached to a bell to escape from the tower.
7. "Would you mind awfully forming three neat ranks?"

Wilson often angered Mainwaring with his casual and lenient manner when addressing the platoon. Mainwaring would always order the platoon around in the normal military fashion, whereas Wilson tended to ask rather than order. Despite this, it is slightly ironic that Mainwaring isn't able to grasp the Army idea of telling the time, with Wilson often having to correct him about the 24-hour clock (e.g. twenty-one hundred hours). Wilson said this in the first ever episode, "The Man And The Hour", when first ordering the platoon after their formation.
8. "Uncle Arthur?"

Sergeant Arthur Wilson was having an affair with Pike's mother throughout the programme, which was never really a publicised matter, but everyone had an idea what was happening. This situation wasn't helped by Private Pike, who would often refer to the Sergeant as 'Uncle Arthur' when asking him a question.

This annoyed Mainwaring a lot, as he would often ask Wilson to stop Pike from calling him this while on duty. There are also a lot of doubts over Pike's parentage, with 'Uncle Arthur' a possibility.

Another very endearing phrase from Dad's Army from Corporal Jones, arguably the most popular character on the sitcom. He would often say this whenever talking about the Germans, often comparing them unfavourably to the 'Fuzzy-Wuzzies'. Jones would often order the platoon to 'fix bayonets', and to use the 'cold steel', because the Germans 'don't like it up 'em'.

He would also often reminisce about the days under General Kitchener. Although Jones was about 70 years old, Clive Dunn (the actor who played him) was significantly younger.

In "Asleep In The Deep", Jones said this phrase when Mainwaring asked why the men had 'fixed bayonets' and Jones replied with the aforementioned phrase, creating a hole in the bunker as he demonstrated the action of shoving the bayonet up.
10. And one from someone outside the Home Guard, "Frank! It's past your bedtime!"

Of course, it was Pike's mother, Mavis Pike, who would interfere with Home Guard matters to make a fuss over Pike, or to scold Captain Mainwaring for his activities in the Home Guard that may cause Pike to catch a cold. She would often 'mollycoddle' Pike (in Mainwaring's words), or tell Sergeant Wilson to persuade Mainwaring to tone down his activities. Captain Square is Mainwaring's rival in another Home Guard platoon, who only appears sporadically.

More of a rival to Mainwaring is ARP Hodges, who often tells Mainwaring to 'put that light out!' and often referring to him as 'Napoleon'. Mrs Fox was a very close friend of Corporal Jones.

In "The Man And The Hour", Mrs Pike interrupted the first ever platoon by entering and taking Pike away after the aforementioned phrase.
Source: Author mick_is_god 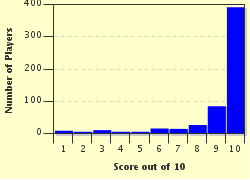 
Other Destinations
Explore Other Quizzes by mick_is_god