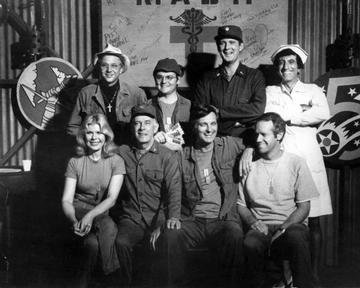 While Father Mulcahy struggles with the fact that he can't seem to get a promotion, the senior members of the medical staff play a game of 'can you top this' with dirty tricks. Will there be any winners? Yes, the viewer, of course! Good luck.

Quiz Answer Key and Fun Facts
1. For Father Mulcahy, it sometimes seems that the world is passing quickly passing by him, especially in the realm of military promotions. In this episode, what is Father Mulcahy's military rank?

Father Mulcahy desperately wants to be promoted to captain from 1st Lieutenant, but he can't seem to ever attain that extra silver bar. Later, Mulcahy will confront Colonel Potter about his promotion, stating that, 'Though it is true that the meek shall inherit the earth, God helps those who help themselves.'
2. Margaret is beaming with happiness. She has just learned that her ex-husband Donald has been forced by her attorney to release her half of theor joint savings account. She celebrates with a prank on Hawkeye. What trick does she pull at the mess table?


Answer: Pours way too much sugar in Hawkeye's coffee

Margaret is feeling rather chipper indeed. With Charles looking on, but unbeknownst to Hawkeye, she pours at least ten teaspoonfuls of sugar into the latter's coffee. In retaliation, Hawkeye spritzes Margaret with some coffee from his fingers. Margaret tosses two pancakes at him in return. Hawkeye ups the ante by flipping oatmeal on Margaret's forehead.

She laughs it off...but not for long.
3. Captain Toby Hill is a chopper pilot and bona fide war hero. He makes a heroic landing right in the middle of the 4077th camp, complete with a casualty on one side of his chopper and his dummy counterweight on the other. What is his dummy buddy called?

Toby Hill calls his dummy Little Mac, as opposed to 'Big Mac', aka Douglas MacArthur. Hill has been featured in 'Stars & Stripes', and has carried 315 casualties in his chopper (later in the episode, he carries #316).
4. In retaliation for some oatmeal on her forehead, Hawkeye and BJ have received some trick letters thanks to Margaret (with a little help from Charles). What is contained in BJ's letter?

Hawkeye's letter contains a small buzzer contraption, while BJs has some white powder. BJ foolishly blows in his letter to open it up, and gets a faceful of white. (Oddly enough, when BJ blows into the letter, it is already spread open.)
5. Hawkeye and BJ are quite miffed about the letters, but fail to immediately retaliate. Fortunately for them, Charles has taken the liberty of creating an embarrassing situation for Margaret in the mess tent. What dessert treat is involved in this bit of fun?

Charles has a lemon meringue pie delivered to Margaret by Klinger. Klinger claims that the was baked in honor of Captain Hill, and that Hill wishes to have Margaret share in his bounty with the message 'Sweets for the Sweet'. Margaret, flattered by the attention, proceeds to thank a completely clueless Toby Hill. Margaret is so incensed that she flings the pie at Hawkeye and BJ, with an unfortunate Father Mulcahy taking the brunt of her attack.
6. Margaret humiliates Hawkeye and BJ by taking their robes and towels out of the shower tent while they bathe, allowing the entire camp to see them in the buff. That evening, they get back at Margaret (again, with Charles' help) by placing Captain Hill's dummy into Margaret's closet. After the dummy 'attacks' Margaret, what piece does she tear off the hapless fellow?

Margaret not only tears off an arm, she proceeds to beat Hawkeye and BJ with it. Poor Little Mac has been crippled, with little possibility of repair! Charles consoles a distraught Margaret, promising revenge the following morning.
7. Hill 503 has come under attack, and a call has come to pick up a casualty. With Captain Hill's dummy out of commission, who volunteers to serve as a counterweight on the chopper?

A heroic Father Mulcahy throws caution to the wind and climbs aboard Hill's chopper as a counterweight for the single patient who will be transported back to the 4077th. After their return to the camp, a disoriented Father Mulcahy claims that he can't stop the earth from spinning. Colonel Potter is miffed at Mulcahy's heroics, but at the same time says that he will put the good Father up for a medal.
8. What rotten thing does Margaret claim to have done in revenge for Hawkeye and BJ's dummy stunt from the night before?

Margaret claims to have not only sent a letter to Peg, detailing her torrid affair with BJ over the past year, she also claims that she has Hawkeye to thank for bringing them together. A furious BJ physically attacks Margaret...or so it seems.
9. Charles has been duped. Somehow, Margaret, BJ and Hawkeye have discovered that Charles is the one behind all the practical jokes, and they have pulled one on him in return. What children's song do they sing in medley after revealing their devious scheme to Charles?

Charles is a complete shambles after BJ pretends to attack Margaret, thinking that he has exacerbated the situation beyond his control. He admits to masterminding the whole affair. Margaret and BJ suddenly stop their struggle, and announce their satisfaction at Charles' humiliation. Along with Hawkeye, they sing a medley of 'Row, Row, Row Your Boat' as they walk out of the Swamp, leaving Charles behind to stew in his own pot.
10. Does Father Mulcahy get the promotion he so desperately wants in this episode?

Unfortunately, Father Mulcahy will have to wait all the way until the eighth season episode 'Captains Outrageous' to get the promotion he so richly deserves. Ah well, better late than never.

Thank you for playing this quiz, I hope you have enjoyed it.
Source: Author thejazzkickazz