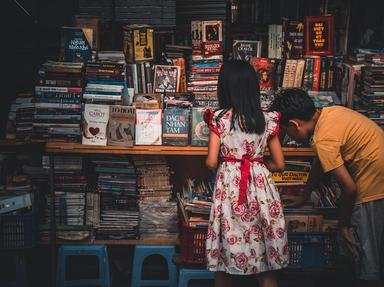 These ten books have one thing in common - the word "great" in their title. If you want to score really well on this quiz, check them out at your local library.

Quiz Answer Key and Fun Facts
1. "Jimmy the Greatest" (2012) by Jairo Buitrago is about a young man in Latin America who is a fan of what sport?

"Jimmy the Greatest" is about a young man who is a fan of Muhammad Ali. He emulates his hero by both reading and boxing. Muhammad Ali frequently claimed to be the greatest boxer of all time, and actually proved it in the ring during a very successful career.

The book was named one of the best children's books of 2012 by both Kirkus and School Library Journal.

Jairo Buitrago is a native of Colombia who currently lives in Mexico City. While he writes in Spanish, his books have been translated into numerous other languages, including English, Chinese, Japanese and Turkish. His first book, "Mr L. Fante", was published in 2006, and he has since written a number of books for children.
2. "The Great Race: An Indonesian Trickster Tale" (2012) by Nathan Kumar Scott stars what kind of animal as the trickster racer?

The star of "The Great Race" is a mouse named Kanchil. The book is based on an Indonesian folk tale and illustrated with ritual textile paintings from Gujarat, India. The mouse ultimately loses the race to a snail named Pelan. It bears obvious parallels with Aesop's "The Hare and the Tortoise".

The New York Public Library named "The Great Race" one of the "100 best books for reading and sharing of 2012."

Nathan Kumar Scott was born and raised in India. He went to college in the United States, at Oberlin (BA) and the University of Washington (Masters). He knows a whole lot about puppets. Nathan has traveled a lot in Central and South America. He lives with his family in Colorado.
3. Matt Luckhurst used what American folk hero as the main character in "The Great Pancake Adventure" (2012)?

"The Great Pancake Advenure" follows Paul Bunyan and his ox Babe as they work for a logger who pays them in pancakes. During their employment, they create the Rockies out of pancake batter as well as creating the Grand Canyon. The book is a fun read, but not very scientific when it comes to geology.

The 2012 book is a debut by Matt Luckhurst, and features colorful goauche paintings. It received excellent reviews, including making the New York Public Library's Children's Books 2012: 100 Books for Reading and Sharing list and The Canadian Children's Book Centre's Best Books for Kids & Teens (Spring 2013).
4. Alexander McCall Smith's "The Great Cake Mystery" takes place in what part of the world?

"The Great Cake Mystery" (2012) was inspired by the No. 1 Ladies' Detective Agency series, which is set in Botswana in Africa. The book tells the story of Precious Ramotswe's first case as a little girl - she grows up to become a famous detective,

When a classmate is wrongly accused of stealing cake, Precious decides to investigate and find the real thief. This inspires her to become a detective,

Alexander McCall Smith is probably best known for his "No 1 Ladies Detective Agency" novels, which have sold over 20 million copies all around the world. He has also written over thirty children's books. Smith has earned many honors, including honorary degrees from lots of universities.
5. "The Great Molasses Flood" (2012) by Deborah Kops is based on a real life disaster in what American city?

The Great Molasses Flood happened in Boston in January 1919. A vat containing 2.3 million gallons of molasses burst and a huge tsunami of molasses moving at 35 miles per hour flooded the streets of north Boston. 21 people died, and 150 more were injured.

The book by Deborah Kops is aimed at readers 9-12. It tells the individual stories of the people involved in the disaster, creating a more personal look at one of America's stranger food related tragedies. Kaps manages to strike a good balance, capturing the real tragedy of people dying in an admittedly absurd way,

Deborah Kops is a native of Boston. She has written over 20 books for children and young adults. Her other books include biographies of Abraham Lincoln and suffragette Alice Paul.
6. In Marjorie Sharmat's "Nate the Great" series, what is Nate so great at?


Answer: Being a detective

"Nate the Great" is billed as the world's greatest detective. Marjorie Sharmat wrote her first Nate book in 1972 and wrote 28 more over the next 40 years (towards the end of her career, she wrote some stories with her sons Craig and Andrew.)

Roald Dahl wrote a sequel to "Charlie and the Chocolate Factory" in which Charlie and everyone's favorite chocolatier travel in the glass elevator seen at the end of the book.

Willy and Charlie wind up fighting Vermicious Knids on a space station. They win by burning up the enemy aliens in Earth's atmosphere. They is also a subplot about the de-aging and re-aging of Charlie's grandparents. The book describes the Knids as huge, dark and egg shaped; their favorite activity is to form the word "scram."

As to the others, they are among the beasts that tormented the Oompa Loompas in Loompaland. Wonka mentions them in "Charlie and the Chocolate Factory."
8. Sid Fleichsman's "By the Great Horn Spoon" is set during what period of American history?

"By the Great Horn Spoon" is about a young man named Jack and his butler named Praiseworthy and their adventures during the California Gold Rush of 1848. Their nemesis is a thief named Cut-Eye Higgins, who steals their money and a map showing gold mines.

Sidney Fleischman (1920-2010) wrote numerous children's books over the course of his long career. He won the Newbery Award (a major prize for children's books) in 1987 for "The Whipping Boy." He began writing children's books in 1962. "By the Great Horn Spoon" (1963) was his second children's book.
9. John Fitzgerald's "Great Brain" series is set in a small town in what state?

"The Great Brain" is set in the fictional town of Adenville, Utah between 1896 and 1898. Its hero is Tom Dennis Fitzgerald, nicknamed "The Great Brain". The Fitzgerald family are Roman Catholics in a town filled with Mormons, so there is a "fish out of water" aspect to the stories. The stories are based on Tom Fitzgerald, who usually has a get rich quick scheme going, and are told by his younger brother John.

John Fitzgerald (1906-1988) is most famous for his books based on his youth in Utah. His "Great Brain" series is set at the turn of the century and paints an accurate picture of life in the American West in the late 19th century.
10. In the Dr Seuss book "Great Day for Up" (1974) who is not excited about getting up?


Answer: The person telling the story

The whole book claims that the day is a "great day for getting up" until the last page when the narrator says they want to stay in bed that day. "Great Day for Up" was published by Dr Seuss in August 1974.