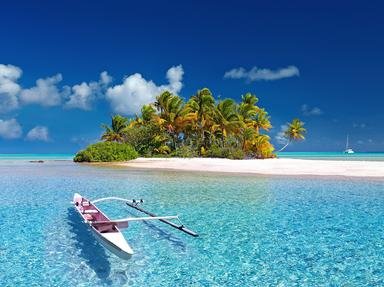 No Man, It's An Island! Trivia Quiz

Approximately a quarter of all sovereign countries are island nations. Some consist of one or two main islands, some are archipelagos, and some are parts of larger islands. Can you sort these 20 island countries into the correct category? Enjoy!

In Spanish, the words "Antigua" and "Barbuda" mean ancient and bearded, respectively.
2. Bahamas

The Commonwealth of the Bahamas is an archipelago located within the Lucayan Archipelago (also known as the Bahama Archipelago). The nation consists of more than 700 coral islands.

Bahamas' nearest neighbors include the US (the state of Florida) and Cuba.
3. Barbados

Geographically speaking, Barbados is a continental island located in the Lesser Antilles. The island nation is also the easternmost Caribbean island.

Etymologically speaking, the word "Barbados" means "the bearded one" in Portuguese and Spanish.
4. Brunei

Brunei, or Brunei Darussalam, shares the island of Borneo with two other nations - Malaysia (the states of Sabah and Sarawak) and Indonesia (Kalimantan). This tiny Southeast Asian nation is completely surrounded by Malaysia's largest state, Sarawak.

Located in the Atlantic Ocean, the Republic of Cape Verde is an archipelagic nation that is made up of ten volcanic islands, symbolized by the ten five-pointed stars arranged in a circle on the nation's flag.

The island nation is named after Cap-Vert (also known as the Cape Verde Peninsula), which is the westernmost point of the African continent. In Portuguese, the name "Cabo Verte" means green cape.
6. Dominican Republic

The Dominican Republic occupies the eastern half of the island of Hispaniola, which is the second largest island in the West Indies, after Cuba.

The country was named after the patron saint of astronomers, Saint Dominic.
7. East Timor

The Democratic Republic of Timor-Leste, or East Timor, occupies the eastern half of the island of Timor in Maritime Southeast Asia. The western half of Timor, on the other hand, is occupied by the Indonesian province of East Nusa Tenggara.

The nation gained its independence in 2002, making it the newest sovereign state in the 21st century.
8. Haiti

The name of the nation, Haiti, means "land of high mountains" in the indigenous Taíno language.
9. Indonesia

Located in Maritime Southeast Asia, the Republic of Indonesia is an archipelago that is made up of more than 17,000 islands. Some major islands include Java, Sulawesi, and Sumatra.

Indonesia also has lands on the islands of Borneo, New Guinea, and Timor.
10. Kiribati

Located in the central Pacific Ocean, the Republic of Kiribati is an archipelago that consists of more than 30 atolls.

Kiribati straddles both the equator and the International Date Line, making it the only nation in the world that has lands in all four hemispheres.
11. Madagascar

Located in the Indian Ocean, the Republic of Madagascar is the world's fourth largest island, after Greenland, New Guinea, and Borneo.

Located in the Laccadive Sea of the Indian Ocean, the Republic of Maldives is an archipelago that is made up of approximately 1,200 coral islands, the largest of which is the island of Gan.

Located in the subregion of Micronesia in the South Pacific Ocean, the Republic of Nauru consists of a single oval-shaped island.

Located in the southwestern Pacific Ocean, New Zealand consists of two main islands - the North Island and the South Island. The two islands are separated by the Cook Strait.

Located on the Pacific Ring of Fire, the country is largely mountainous.
16. Saint Kitts and Nevis

At only 3 kilometers (2 miles) apart, the two islands are separated by The Narrows Strait.
17. Săo Tomé and Príncipe

Located in the Gulf of Guinea, the Democratic Republic of Săo Tomé and Príncipe consists of two main islands - Săo Tomé (the larger island) and Príncipe (the smaller island).

Săo Tomé and Príncipe is the second smallest African nation, after Seychelles.
18. Singapore

Singapore is linked to Malaysia via the Johor-Singapore Causeway and the Tuas Second Link.
19. Sri Lanka

Located in the Indian Ocean, the Democratic Socialist Republic of Sri Lanka consists of one main island.

Located on the northwestern coast of Sri Lanka, Mannar Island is linked to the mainland via the Mannar Bridge.
20. Trinidad and Tobago

Located in the West Indies, the Republic of Trinidad and Tobago is made up of two main islands - Trinidad (the larger island) and Tobago (the smaller island).

The island of Trinidad is known to be the southernmost island in the West Indies.
Source: Author Matthew_07