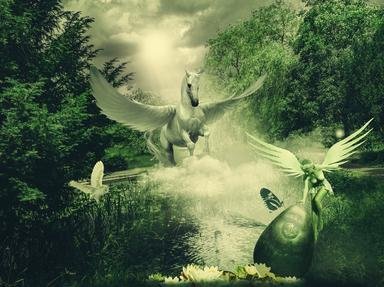 Foxes have appeared in myths and legends worldwide, in various forms. While some mythical foxes are lovable tricksters, others are downright malicious.

Quiz Answer Key and Fun Facts
1. With which natural phenomenon are foxes associated in northern Finland?

The Finnish word for 'Northern Lights' is 'revontulet', which means 'foxes' fire'. In the folklore of northern Finland and Lapland, Tulikettu the firefox was a legendary giant fox who lived in the north, and it was every hunter's dream to catch him, as catching him would make them rich.

However, he could not be caught because he was as fast as the wind. When Tulikettu ran through the snow, his fur touching the snow would create sparks, which became the Northern Lights. There's some truth in the myth - in freezing cold weather, when the air is dry, a fox's fur can become electrified and create tiny sparks.
2. In African-American folklore, Br'er Fox is one of the many enemies of Br'er Rabbit. Which animal often accompanies him as his sidekick?

The 'Br'er Rabbit' stories, collected by Joel Chandler Harris, are based on stories from African-American folklore about the cunning coney and his foes. If you've seen Disney's 'Song of the South', you might remember that it had three animated sections with various Br'er Rabbit stories: 'Br'er Rabbit Earns a Dollar a Minute', 'Br'er Rabbit and the Tar Baby', and 'The Laughing Place'.

Foxes being natural predators of rabbits, Br'er Fox is a recurring enemy who attempts to trap Br'er Rabbit by such means as a snare or a baby made of tar, and Br'er Bear is his dim-witted sidekick. In 'Br'er Rabbit Earns a Dollar a Minute', Br'er Rabbit gets caught in Br'er Fox's snare while stealing peanuts from his garden, but tricks Br'er Bear into taking his place by claiming he was getting paid a dollar a minute to hang there.
3. Which Sumerian fertility goddess, also known as Damgalnuna, was associated with foxes and used them as messengers?

Ninhursag was a Sumerian goddess of fertility and one of the Anunnaki, the seven major Sumerian deities. She is sometimes equated with Ki, the goddess of the sky, in the 'Enūma Elis' (the Babylonian creation myth), and was also associated with mountains and the wild animals that lived there, such as deer; her temples often had stags depicted on their walls.

Ninhursag was the consort of Enki, the god of wisdom, and in one myth, a series of plants sprang from her body, created by Enki's seed. Enki ate the plants and Ninhursag cursed him, and he became ill. Ninhursag was the only person who could heal him, and a fox, one of her animals, went to fetch her back. She asked Enki where the pain was and drew the pain into her body eight times, each time giving birth to a different god. Foxes were also said to carry the prayers of worshippers to Ninhursag.
4. According to Irish myth, what do foxes often disguise themselves as?

There are many myths all over the world about animals disguising themselves as humans, often to seduce humans of the opposite sex, and the fox-woman appears in multiple cultures, including Irish myth. Because foxes in Ireland have red fur, they turn into red-haired women, often with green eyes. One superstition says that meeting a red-haired woman while you're setting out in the morning is unlucky, especially if you happen to be a fisherman, because she could be a fox in disguise! Foxes are also believed to predict weather; if a fox barks, it means it is going to rain.
5. Foxes feature in the folklore of many Native American nations. What colour is Kwahn, the fox spirit who appears in Achumawi, Atsugewi and Miwok folklore, and acts as a partner to the trickster Coyote?

Kwahn aka Silver Fox is either male, or female, depending on the nation. In Miwok folklore, she is female, while in Achumawi folklore, he is male. Unlike foxes in various other myths and legends, Silver Fox is not a trickster, but a wise creator god. In an Achumawi creation myth, when all the world was water, Coyote was born from a cloud and Silver Fox from fog; they created a canoe and travelled around in it for several years, but eventually grew tired. Silver Fox combed his fur and used the combings to make land, and created trees, shrubs and rocks.

When the canoe landed on the shore, Silver Fox and Coyote built a sweat-house to live in and created animals and people from sticks.
6. Which of these Chinese mythical creatures is a fox spirit, often depicted as having nine tails?

The huli jing is a shapeshifting fox that can either be benevolent or malevolent, and is often depicted with multiple tails. Huxíān is a fox god worshipped in northern China; its most common form is a nine-tailed vixen, Huxíān Niángniáng. In one Tang Dynasty legend, a fox could become human by wearing a skull that fit and worshipping the Big Dipper; in another legend, King Yu the Great saw a white fox with nine tails and believed it was a sign that he would marry. Foxes were said to gain the ability to transform into women at the age of fifty.

Daji, a legendary concubine of King Zhou who appears in 'Fengshen Yanyi', was said to have been possessed by a particularly nasty huli jing, which drove her to commit atrocities and torture people, feeding women to snakes, setting tigers on people in a forest and forcing nobles to hug red-hot pillars. The strategist Jiang Ziya later forced the huli jing out of Daji's body.
7. 'Giovannuzza the Fox' is an Italian folk tale about a very clever vixen. To which folk tale is it most similar?

However, unlike 'Puss in Boots', this story does not have a happy ending. Giovannuzza requests that when she dies, the couple give her a proper funeral with a beautiful coffin. She plays dead to test them and when the princess says they should give her a funeral, Count Peartree replies that she is just an animal, and prepares to throw her out of the window. Giovannuzza is furious at his lack of gratitude and runs away. In some versions of the story, she drowns in a well.
8. Which African fox species appears in the folklore of the Dogon people of Mali, where it acts as a messenger from the gods?

The pale fox lives in the Sahel region and looks similar to a fennec fox, with its bat-like ears and big black eyes. It gets its name from the pale sandy colour of its fur, which acts as camouflage in the desert. In the folklore of the Dogon, Yurugu the pale fox is a trickster and thief, and was born from the mating of Amma, the creator, and Mother Earth. Unlike other creatures, Yurugu was born without a female twin - all divine children being born as sets of male and female twins - and his chaotic nature was caused by an imbalance due to not having a twin.

Pale foxes are thought to know Amma's plans for humanity. If Dogon elders are seeking answers to questions asked by clients, they draw symbols in the sand to represent the questions and possible answers, and scatter peanuts over the symbols to attract pale foxes. If a pale fox comes to eat the nuts, the elders will check where it leaves its footprints to see which answer it has chosen.
9. In Greek mythology, Dionysus sent the Teumessian Fox to Thebes, to kill and eat the children there. The fox was a giant beast that could not be caught - at least, in theory. Which dog did the general Amphitryon use to catch the Teumessian Fox?

Dionysus, the Greek god of wine, set a giant fox known as the Teumessian Fox upon the city of Thebes in central Greece, as a punishment for an unknown crime. Creon, the ruler of Thebes (and uncle of Oedipus), set the general Amphitryon the task of dealing with the beast, a seemingly impossible task as it could not be caught. However, Amphitryon came up with a clever solution: Laelaps, a hunting hound that could catch any prey, was the perfect counter to the Teumessian Fox.

Cephalus, the husband of the Athenian princess Procris, set the dog on the fox. However, because Laelaps and the Teumessian Fox created a paradox, with one being able to catch anything and the other being incapable of being caught, Zeus turned them both into stone to stop the never-ending chase. He cast the two animals into the sky and the fox became the constellation Canis Minor, while Laelaps became Canis Major.
10. One of the most famous Japanese mythical creatures is the kitsune, a fox with multiple tails. While some kitsune can be friendly, others are downright evil. Which legendary Japanese courtesan was said to be a wicked fox spirit in disguise?

Tamamo-no-Mae was a legendary courtesan of the Emperor Toba. The fox spirit who possessed Daji also possessed Lady Kayo and Bao Si, a Chinese concubine, before appearing in Japan as Tamamo-no-Mae. She made the emperor ill and when the astrologer diagnosed the emperor's sickness, he exposed her as a wicked kitsune. The emperor had her hunted down and slaughtered, but her spirit took possession of a stone that released poisonous gases, killing anything that touched it. A Buddhist monk, Gennou Shinshou, eventually exorcised the fox's spirit. The stone split in 2022, causing many jokes on Japanese social media about the fox spirit being responsible for various goings-on around the world.

More benevolent kitsune are associated with the trickster god Inari, and foxes are seen as his messengers; worshippers leave offerings for them at his temples. The tanuki, or raccoon dog, is said to be the kitsune's rival. When a kitsune reaches the age of 1000 years and gains a ninth tail, it becomes a celestial being and turns white or gold.
Source: Author Kankurette