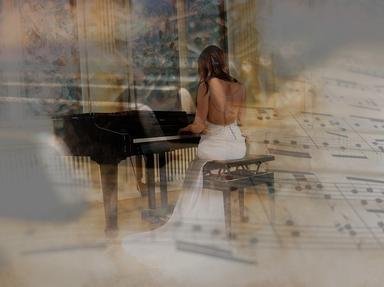 A mix of 10 Music questions, submitted by 10 different FunTrivia players! The first few questions are easy, but the last couple are tough!

Quiz Answer Key and Fun Facts
1. Which British band of the '60s, known for their suits and haircuts, had a debut album in the UK called 'Please, Please Me'?

Question by player ColinZeal
2. The Lemon Pipers and The Byrds both sang about which musical instrument in the 1960s?

The Lemon Pipers took 'Green Tambourine' into the charts in 1968 at the height of the psychedelic era. The Byrds recorded Bob Dylan's song 'Mr Tambourine Man' in 1965, reaching the top of the charts in both the USA and UK with it.

Question by player rossian
3. Once a B-Side to "I'm Sorry", which John Denver song was a tribute to the oceanographer Jacques-Yves Cousteau and his ship?

Released in 1975, "Calypso", an inspiring song about the iconic Frenchman Jacques-Yves Cousteau and his ship, Calypso, started off as the B-side to "I'm Sorry". John Denver took "I'm Sorry" to number one on the Billboard Hot 100, and the B-side got plenty of airtime too. So when "I'm Sorry" dropped from the top spot, the Billboard started listing "Calypso" as the A-Side and it eventually got to number 2. Calypso can also mean Trinidadian folk music and all the wrong answers are music and/or dance from the Caribbean.

Question by player Quiz_Beagle
4. This group from Limerick, Ireland, sang about "Dreams" and "Zombie", and their fruity name goes well with Thanksgiving dinner!

They were first called "Cranberry Saw Us" until it was changed later by Dolores O'Riordan.

Question by player IAMMAGIK7
5. "Got an AK-47, well you know it makes me feel alright Got an Uzi by my pillow, helps me sleep a little better at night. There's no feeling any greater Than to shoot first and ask questions later" Who sang these interesting lyrics?

Weird Al's "Trigger Happy". Not a spoof on anything, except for the Americans' love of weaponry.

"Come on and grab your ammo
What have you got to lose?
We'll all get liquored up
And shoot at anything that moves!"

Question by player alucard9798
6. Robin would not be happy with this bizarre Wesley Willis song. Can you guess the name of this song?

Wesley Willis was a non-conventional, schizophrenic singer/songwriter who wrote bizarre, funny and sometimes obscene songs with titles like "Rock and Rock McDonald's", "Tammy Smith" "I Wupped Batman's Ass" and "Chronic Schizophrenia." His very unique style caught the attention of Eddie Vedder and Jello Biafra and Willis developed quite an underground following.

Question by player ramonesrule
7. What previously unknown Australian artist (who sounds like a duo) wrote and released "Dance Monkey" in 2019 and broke records for topping the ARIA and UK charts?


Answer: Tones and I

Singer-songwriter and former busker Toni Watson, who uses the stage name Tones and I, had a breakout electropop hit with "Dance Monkey" on her first EP, 'The Kids Are Coming'. In the U.S., "Dance Monkey" did not quite reach number one but got number four, making it the first top-five Billboard hit written entirely by a woman since 2011. "Dance Monkey" was an even bigger smash in Europe and Australia.

It spent a record 11 weeks on the UK Singles Chart, beating a 10-week record jointly held by Whitney Houston ("I Will Always Love You") and Rihanna and Jay-Z ("Umbrella"). From late 2019 to early 2020, "Dance Monkey" lasted 24 weeks at number one in the ARIA (Australian) Singles Chart, crushing the once-thought unbeatable record that Bing Crosby's "White Christmas" had held since 1943.

Question by player gracious1
8. Who did Simon and Garfunkel beg to come home in their 1970 hit?

Paul Simon wrote "Cecilia" and it was recorded by the duo in 1970 on their fifth album "Bridge Over Troubled Water". The lyrics suggest a lover lamenting and pleading with his girl to come back to him but an alternative interpretation is that it is a plea to St Cecilia, the patron saint of music, to return and give the writer some more inspiration. "Cecilia, you're breaking my heart. You're shaking my confidence daily. Oh, Cecilia, I'm down on my knees I'm begging you please to come home, Come on home."

Question by player Midget40
9. Born in 1886 in Lithuania, who was the U.S. most famous and best paid entertainer in the 30s?

Born Asa Yoelson, Al Jolson's signature tune was "My Mammy" (I'd Walk a Million Miles for One of your Smiles) and he was the star of the first talking picture, "The Jazz Singer".

Question by player chabenao1
10. If a group are playing a washtub string bass, a comb-and-tissue-paper kazoo, some spoons, a ceramic jug, and a washboard, what kind of band are they?

The original jug bands were driven by poverty and the need to make music; modern jug bands are driven by appreciation for the musical form. They all involve homemade instruments, especially a jug over the opening to which the player buzzes his lips producing a characteristic sound.

The music is distinctly Southern American. The Nitty Gritty Dirt Band got its start as a jug band. The National Jug Band Jubilee is held annually in Louisville, Kentucky, which claims to be the birthplace of jug band music.