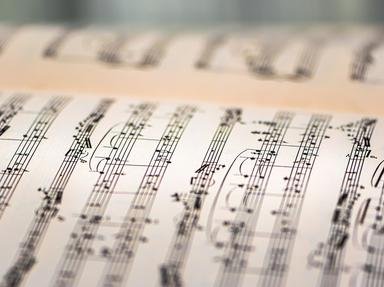 Quiz Answer Key and Fun Facts
1. None Still Down

The opposite of none is all, of still is shook, and of down is up.

Otis Blackwell wrote "All Shook Up." On April 13, 1957, the song reached number one on the Billboard Top 100, remaining for eight weeks. According to some sources, Blackwell wrote the song after Al Stanton of Shalimar Music was shaking a bottle of Pepsi and told him he should write a song using the phrase "All shook up." Other sources say that Elvis thought "All shook up" made a good line and was credited with co-writing.

Elvis himself said in an interview in 1957 that he woke up from a dream "all shook up." He said he wasn't thinking about a song, he just called his friend to tell him what happened, and that morning he was given a new song.
2. Am I Crowded This Morning


Answer: Are You Lonesome Tonight

"Are You Lonesome Tonight" was written by Lou Handman and Roy Turk in 1926. Since then, it was covered by many people, but in 1960, Elvis recorded it after Colonel Tom Parker suggested it. It was Parker's wife's favorite song. Elvis' recording reached gold in 1983, and by 1992 it had gone double platinum.
3. Tell You

"Ask Me" was originally an Italian song by Domenico Modugno that was translated into English by Bernie Baum, Bill Giant, and Florence Kaye. Elvis recorded the song in 1964. It reached number 12 on the US Billboard Hot 100.
4. Can Hinder Breaking Up

"Can't Help Falling in Love" was written by Hugo Peretti, Luigi Creatore, and George David Weiss. The melody is based on the 1784 French love song "Plaisier d'amour" by Jean-Paul-Égide Martini. Elvis recorded it in 1961 for his "Blue Hawaii" album.
5. Do

"Don't" was written by Jerry Leiber and Mike Stoller and recorded by Elvis in 1958. It was Elvis' 11th number-one hit in the United States.
6. Do Laugh Mommy

"Don't Cry Daddy" was written by Scott Davis, also known as Mac Davis. Elvis recorded it in 1969. The song reached number six in the US and eight in the UK.
7. Obscurity and Poverty

"Fame and Fortune" was written by Fred Wise and Ben Weisman. The song was published by Elvis' publishing company Gladys Music, Inc. Gladys was the name of Elvis' mother, whom he loved dearly. He recorded the song in 1960 and also sang it on "The Frank Sinatra Timex Show: Welcome Home Elvis" special in 1960.
8. Lead This Nightmare

"Hard Headed Woman" was written by Claude Demetrius. It is an American 12-bar blues song, but Elvis recorded it as a rock and roll song for the movie "King Creole." It reached number one on the Billboard charts.
10. It's Later and Always


Answer: It's Now or Never

"It's Now or Never" got its music from the Italian song "O Sole Mio" by Eduardo di Capua. Aaron Schroeder and Wally Gold wrote the lyrics. Another song based on "O Sole Mio" is the Tony Martin song "There's No Tomorrow." Elvis really liked the song when he heard it while stationed in Germany in the Army, plus he was a fan of Mario Lanza, who made "O Sole Mio" famous.
Source: Author Ilona_Ritter

More Music in Other Words Quizzes