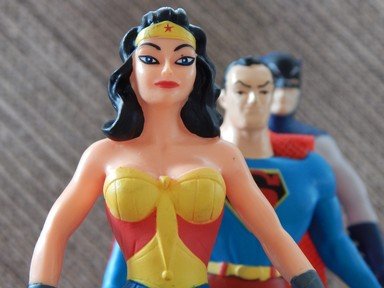 Join the Phoenix Rising Orange crew as we learn about a mixed-up group of people. We'll give you their first name; you need to match them with the correct surname and description.

After World War I, he built a cabin in the woods near Carmel-by-the-Sea where he turned his attention to the occult and experimented with telepathy, communicating with extraterrestrials, and spirits of the dead from ancient societies like the Greeks, Egyptians, and Vikings, to fabled races like the Atlanteans, to more modern figures like Thomas Jefferson and Charles Darwin. He claimed to have made contact with extraterrestrial life most notably in the Pleiades star cluster. During his entire career he was an avid artist and his art is still much sought after especially by those interested in the occult and extraterrestrial life.

This question was transcribed by Phoenix Rising member tazman6619 who made contact with the spirit of Grant Wallace and wrote down what he was told.
2. Park: British animator and creator of Wallace and Gromit

Nick Park is an animating genius. He is the brains behind such wonderful creations as "Wallace & Gromit" (1989), its spin-off "Shaun the Sheep" (1995), and the hilarious "Chicken Run" (2000). If you're familiar with these series/films, you will also realise that Nick's forte is with clay animation. Nick was drawn (pun intended) to animation at an early age and was making short films at home from the age of 13 with the encouragement of his mother.

His skills have been recognised to the point that the artist Peter Blake selected Nick in 2012 to include him on his latest re-creation of the Beatles' "Sgt. Pepper's Lonely Hearts Club Band" album cover. By 2022, Nick had managed to secure four Academy Awards for his works.

This question was written by Phoenix Rising's pollucci19 who once asked his friend Nick for five cents, but he was Nicholas.
3. Sabanpan-Yu: Philippine story writer, poet; became Director of the Cebuano Studies Centre in June 2011.

Along with being the Director of the Cebuano Studies Centre at the University of San Carlos, Hope Sabanpan-Yu is also the Central Visayas coordinator of the National Committee on Literary Arts, secretary of the Women Studies Association of the Philippines, a member of the Women in Literary Arts, and a member of Bathalan-ong Halad sa Dagang. She writes in both Cebuano and English. Her poetry has been published in several collections and she has edited two anthologies of interviews with Cebuano writers. She has edited or co-edited essay collections and poetry collections. She has also translated several authors of Cebuano fiction.

Hope's doctoral dissertation won several awards. She has written several other scholarly works including one on the cultural struggles of migrant Philippine women itself based on the work several other American-Filipino authors; motherhood; and the 'othered' woman.

Bob Hawke was a gregarious and adept leader in the history of Australia. A Rhodes scholar with a law degree from a Western Australian university, he was skilled at gaining consensus between groups with disparate points of view. This ability led to numerous agreements that placed Australia in a strong position to compete in global markets.

He became Prime Minister after only 2 years in parliament, following a long career in the labour movement, being Leader of the Opposition for only one month, and never having served in a ministerial role. He was known as a womaniser and a heavy drinker, and was seen as a 'larrikin' - an uncultivated, ruffianly, but good hearted person. Of all the things he is remembered for breaking a record drinking beer while he was at Oxford University in the 1950s, and his impulsive declaration of a public holiday after Australia's 1983 win in the America's Cup competition are two prominent ones. He died in 2019 aged 89.

This question was voted into the quiz by Phoenix Rising member VegemiteKid.
5. Woodhouse: American feminist leader, suffragist, and educator.

Canadian born Chase Woodhouse would eventually move to Kentucky and then study at the McGill University where she would attain a Masters of Arts degree with honours in Economics. She served for a while in the US Department of Agriculture as a senior economist and then registered to vote as a Democrat. It didn't take Woodhouse long to be the first Democrat woman to be elected as Secretary of State for Connecticut.

Elected to the House of Representatives she made her mark as a strong supporter of women's causes, introducing the bill, "H.R. 1584" to the subcommittee of the House Committee on Education and Labor to highlight the inequality of wages between those of men and women. A staunch feminist, she would use her influence to spread the message of inequality and endeavour to improve the standards of education for women.

This question was written by Phoenix Rising's pollucci19 who, while writing this, could picture his grandson running around the room yelling "Chase is on the case".
6. Crawford: Australian media entrepreneur; radio and television producer

Born in Melbourne, Australia, Hector William Crawford (1913-1991) studied music at university and that passion played a major role in his life. He started and coordinated the "Music for the People" concerts in 1938 and moved them to Melbourne's open air amphitheatre, the Sidney Myer Music Bowl, in 1959. As part of this series, in 1967, The Seekers played to a crowd of over 200,000 people (listed in the 2007 Guinness Book of Records as the largest concert crowd in the Southern Hemisphere).

Crawford also produced a large amount of material, much of it musical, for radio. However, it is probable that he is best known for the company he started with his sister Dorothy, 'Crawford Productions' in 1945. Firstly in radio, and then in television when that medium arrived in Australia in 1956, Crawford Productions was responsible for many of the most-loved and successful series over the next 40 years or more. These included several police dramas such as 'Division 4', 'Homicide', 'Matlock Police' and 'Cop Shop', as well as the World War II drama 'The Sullivans', 'All the Rivers Run', 'The Flying Doctors' and many more. Hector Crawford was the first person inducted into Australian TV's Logie Hall of Fame in 1984. He was also awarded an OBE, raised to a CBE, and an AO (Order of Australia) for his services to music, arts and television.

This question was produced and directed by MikeMaster99 who vividly remembers watching many of the Crawford Productions TV series over the years.
7. French: British comedian, star of "The Vicar of Dibley"

Dawn French rose to fame as part of a comedy duo alongside Jennifer Saunders. Their eponymous TV sketch show "French and Saunders" first aired in 1987 and continued for nearly 20 years with a mix of regular series and occasional one-off special episodes.

While Saunders went on to star in "Absolutely Fabulous", Dawn French became best-known to TV audiences for her role as the titular character Geraldine Granger in the sitcom "The Vicar of the Dibley". The series ran from 1994 to 2007 and followed the lives of Dibley's somewhat unusual residents from the perspective of their (eventually) much-loved female vicar. French was named Best TV Comedy Actress at the 1997 British Comedy Awards for the role and was also later nominated for a BAFTA for Best Comedy Performance.

Although Dawn French is primarily known as a comedian and TV comedy actress, she also appeared in the 2004 film "Harry Potter and the Prisoner of Azkaban" as Gryffindor Tower's guardian portrait, the Fat Lady; voiced Mrs Beaver in the 2005 film "The Chronicles of Narnia: The Lion, the Witch and the Wardrobe"; and played the role of Mrs Bowers in the 2022 film "Death on the Nile".

This question was written by Phoenix Rising's Fifiona81, who decided to refrain from signing off with a joke in case no-one got it.
8. Lunn: Hugenot refugee, made brioche-style buns popular in Bath, England in the late 1600s.

Solange Luyon anglicised her name (so the locals could pronounce it!) when she arrived in England in 1680 after fleeing religious persecution in France. She took a job at the Bath bakehouse in Lilliput Alley and soon began to bake the festival breads she has been used to producing in France. They sold like...um...hot cakes!... and the bun, which could be eaten with sweet or savoury accompaniments, soon became famous across the country.

The original though secret recipe is still created at the house where Sally lived, now a teahouse, and the oldest house in Bath, constructed in 1487. The house itself stands on top of older buildings that were part of the original cathedral complex that burned down in 1137.

This question was baked into the quiz by Phoenix Rising teammate VegemiteKid, who has plans for Sally Lunn and Vegemite at lunch.
9. Cleveland: acting First Lady of the United States 1885 to 1886

Rose Cleveland was the youngest of nine children born to Richard and Ann Cleveland. Her brother Grover was their fifth son and older than Rose by nine years. When Grover Cleveland assumed the presidency in 1885, Rose took on the duties of White House hostess. Rose was an intellectual who favored scholarly pursuits over entertaining, and while not quite suited to high society, was well liked and executed her duties with aplomb. She served as first lady of the United States until President Cleveland married socialite Frances Folsom fifteen months later.

After happily resigning her position, Rose was free to pursue a career in education and writing. She was educated at Houghton Seminary in New York and taught in New York, Pennsylvania, and Indiana. In her later years, Rose entered into a romantic relationship with Evangeline Marrs Whipple. They moved to Bagni di Lucca, Italy in 1912 and lived there together until the Spanish Flu pandemic took Rose in 1918.

Everything's coming up roses since Phoenix Rising's JCSon volunteered to host this question.
10. Drake: one of the principal founders of the search for extra-terrestrial intelligence

Frank Drake began his foundational work in the Search for Extra-Terrestrial Intelligence (SETI) after achieving astrophysics degrees from both Cornell and Harvard. In the 1961 conference at the Green Bank Observatory, he shared the now famous Drake Equation to approximate the number of stars in the Milkyway that could host intelligent life. The equation was designed more to open up discussions about the emerging field than as an accurate tool for measuring life. Around the same time, he was also conducting the first SETI experiment titled: "Project Ozma," which was designed to receive radio waves from Tau Ceti and Epsilon Eridani in the hopes of detecting intelligent life. He also helped create both the Pioneer plaques and the Voyager Golden Records as tools to communicate with any intelligent lifeform that stumbled upon them. In later life, he became the president of the SETI organization which continues his work to this day. Drake passed away on September 2, 2022 at the age of 92. Sadly, he never was rewarded with any proof of life outside our pale blue dot, despite spending a lifetime searching.

This question was written by Phoenix Rising's BigTriviaDawg who discovered extra-terrestrial life in his teenager's bedroom.
Source: Author VegemiteKid