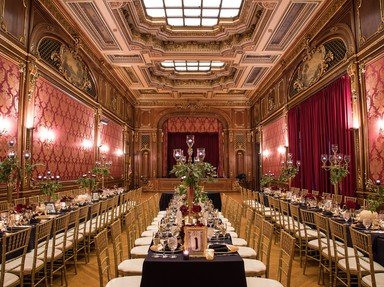 People Who Were Honoured With a Smooth Landing Quiz

Some people's contributions to the world are recognised with tokens like the keys to the city, peerages, some are even canonised - but you know you have made a mark if you are one of the few who have had an airport named after you.

John Lennon's life has been chronicled in great detail, but the renaming of the Liverpool airport in his name does not feature in authorised and unauthorised biographies of his life. Liverpool Airport, known as Speke Airport after the Liverpool suburb it is located in, was privatised in 1991, and the owners decided to rename it in Lennon's honour in 2001, 21 years after his death. Until that time, renaming places was the province of heads of states - making this Beatle the first celebrity to receive this honour.

Liverpool John Lennon Airport was the first British airport to be named after a person. To use his name, the airport needed consent from his widow Yoko Ono. She agreed and made the announcement in the airport in 2001. A year later during the Queen's Silver Jubilee celebrations, Ms Ono and the Queen officially opened the airport in July 2002.

As an added commemoration, a life-sized statue of John Lennon was unveiled at the airport by Yoko Ono and Cherie Booth (the British PM's wife) in March 2002, prior to the official airport opening. Also unveiled at that time was a by-line for the airport: "Above us only sky", a lyric from his anthem "Imagine" (1971).

This question was flown into the quiz by Phoenix Rising's 1nn1.
2. Greek philosopher and polymath Aristotle is one of the most prominent figures in Western culture. In which historic Greek region, which became the centre of an empire, did he spend about seven years of his life?

Born in Stagira (now part of the Greek province of Central Macedonia) in 384 BC, Aristotle is known for its large body of work (of which about one-third has survived), as well as for his huge influence on medieval thought and scholarship. In the early Middle Ages, his influence extended to the Islamic world, where he was deeply admired. A disciple of Plato, Aristotle was the founder of the Peripatetic school of philosophy. He wrote about a wide range of subjects besides philosophy: for this reason, he has been called the father of disciplines such as meteorology, zoology, biology, psychology, logic, and political science.

In 343 BC, Aristotle was invited by Philip II of Macedonia to tutor his son, the future Alexander the Great. During his time at the Macedonian court, Aristotle was appointed head of the royal academy, and tutored two other future kings, Ptolemy (Cleopatra's ancestor) and Cassander. He died in 322 BC at his mother's family estate on the island of Euboea.

Aristotelis Airport, or Kastoria National Airport, is located in the regional unit of Kastoria, near the historic lakeside city of the same name, in the Greek region of Western Macedonia. It is a small airport served by a single airline that flies to Athens about twice a day.

LadyNym of Phoenix Rising's Red Crew tackled this question with a philosophical attitude.
3. In 1992, Giovanni Falcone and Paolo Borsellino were assassinated by the Mafia in Palermo, the capital of Sicily. What was these two unlucky gentlemen's profession?

Judges Giovanni Falcone (born in 1939) and Paolo Borsellino (born in 1940) were both native sons of Palermo, close friends and partners in the fight against the Mafia, which sadly claimed both their lives in 1992. On 23 May, Falcone was assassinated, together with his wife and fellow magistrate, Francesca Morvillo, and three police officers that were escorting them, in a bombing near the town of Capaci, on the highway leading from Palermo's airport to the city centre. 57 days later, on 19 July, Paolo Borsellino and five police officers (one of them a woman) were killed by a car bomb parked near the judge's mother's house in Palermo. Both murders were orchestrated by infamous Mafia boss Salvatore Riina, who was arrested in January 1993, and spent the rest of his life in a maximum-security prison (he died in 2017).

A few years after the judges' tragic demise, Palermo-Punta Raisi International Airport, located about 25 km (15.5 mi) from the centre of the city, was renamed Falcone-Borsellino International Airport. Monuments and memorial to the fallen judges can be found all over Italy, and also outside the country.

LadyNym of Phoenix Rising's Red Crew remembers those terrible days all too well, and wrote this question with a heavy heart.
4. Prior to the papacy, Pope John Paul II served as archbishop of which Polish city?

Pope John Paul II, born Karol Josef Wojtyla, was elected to the papacy in 1978 and served until his death in 2005. His 27-year period of service makes him the second-longest reigning pope in history, exceeded only by Pius IX. (St. Peter likely served even longer as the first pope.) He was the first non-Italian pope since the 16th century. After his death, he was "fast-tracked" for sainthood. During his reign, he reaffirmed many Catholic doctrines, and also improved relations with other faith traditions. He is credited with helping to end communism in his native Poland.

Not surprisingly, the airport in Krakow is named for him, but there is another bearing his name - Joăo Paulo Airport on the island of Săo Miguel in the Azores, which opened in 1995.

Player pusdoc of the Phoenix Rising's Red Crew would like to fly to the Azores some day.
5. Which composer, born in the Donetsk Oblast in what is now Ukraine, wrote the symphonic fairy tale "Peter and the Wolf"?

Sergei Prokofiev was born in Russia, in an area that became part of Ukraine, but was then seized by Russia in 2014. "Peter and the Wolf" is his most frequently performed piece, and is likely one of the most widely performed classical compositions in the world. He composed a huge breadth of musical types, from operas to ballets to concerti. After the Russian Revolution, he lived abroad for some time but returned to Moscow in 1936 and remained there until his death. He died on the same day as Josef Stalin in 1953, which led to difficulty staging his funeral and little public notice.

An airport in Donetsk was named for him, but it was destroyed in the 2014 Russia/Ukraine hostilities.

Player pusdoc is humming the oboe theme from "Peter and the Wolf" as she writes this for Phoenix Rising's Red Crew.
6. Which Portuguese footballer, who captained the National team for the first time in 2007, and won his first Ballon d'Or (Golden Ball) in 2008, was named Forbes 2016's highest-paid athlete of the year?

Cristiano Ronaldo, not to be confused with Brazilian Ronaldo Nazario, began his senior career with team Sporting CP (Sporting Lisbon). At the age of 18 he was signed by Manchester United and helped the team to win FA Cup that same year. Since then he has played for Real Madrid and Juventus before returning to Man U in 2008. A prolific goal scorer, Ronaldo has won numerous personal awards, championship and premier league cups, and, alongside Argentina's Messi, has long been regarded as one of the best players of his generation.

In 2017, Madeira Airport in Santa Cruz was renamed the Cristiano Ronaldo International Airport.

Phoenix Rising's leith90, who couldn't kick a ball to save her life, scored a goal with this question.
7. Which French aviator, who is credited with finding a way to successfully shoot a gun from a propeller aircraft, had a sporting stadium named after him?

Roland Garros became an aviator after watching an air race in 1909. When WWI broke out, he joined the French army as a pilot, but firing a gun from the plane was problematical since the bullets often hit the propeller. With a synchroniser incompatible with the guns used at the time. Garros and his mechanic, Jules Hue, attached thin metal wedges to the propeller to deflect bullets fired from his gun. This was so successful that Garros was the first person to shoot down an enemy aircraft while firing through a tractor propeller.

In 1915 he was shot down in enemy territory and captured by the German forces, but his armoured propeller was now in enemy hands. Garros managed to escape from his POW camp, and rejoined the French army, only to be shot down and killed shortly before the end of the war.

The French tennis stadium, built in 1920 was named for him, and the French Open Championships have also taken his name. The airport in Sainte-Marie on the island of Réunion, an overseas department of France, is also named for Roland Garros, who was born in nearby Saint-Denis. The three wrong answers also have stadiums named after them, though none of them were aviators.

Phoenix Rising's leith90 shot this question into the quiz.
8. Emperor Haile Selassie awarded which Queen of Spain the "Order of the Queen of Sheba" in 1973?

Born in 1938 to King Paul of Greece and Frederica of Hanover, Sophia of Greece and Denmark married Juan Carlos of Spain in 1962. Following the death of Francisco Franco in 1975, they became King and Queen of Spain until he abdicated in favour of their son Felipe in 2014. She changed her name and her religion upon her marriage to become more attractive to the Catholics of her new country. She was a seasoned traveller and visited Addis Ababa in 1973, receiving The Order of the Queen of Sheba, a ladies' Order of Merit, whose badge is a Gold Star of David.

Red Crew's smpdit taxied gently in to add this question.
9. Which Nobel Peace Prize winner was Chancellor of West Germany from 1969 to 1974?

Willy Brandt was born in December 1913. He changed his name from Herbert Frahm in order to avoid detection by the Nazis, making it a permanent change in 1948. He spent time in Norway during the Second World War, returning to Berlin to rejoin the Social Democratic Party of Germany, eventually becoming Chancellor in 1969. He won the Nobel Peace prize in 1971. He was credited with strengthening relations between West Germany and the EEC. He had strong ties with the United States, controversially endorsing the Vietnam War. The Brandt Report was written by an Independent Commission, of which he was chair, which describes the North-South divide in world politics and economics. He resigned from office in 1974, when one of his inner circle was exposed as a communist spy.

Berlin Brandenburg Airport Willy Brandt, an international airport in Schönefeld, is named in his honour.

Red Crew's smpdit flew this question into the quiz.
10. Nicolaus Copernicus (1473-1543) was a polyglot and polymath who was known for many achievements, particularly his theory of heliocentrism. For which one of these roles what he *NOT* known?

Copernicus was born in Torun in Royal Prussia (part of Kingdom of Poland) in 1473 and achieved much as a young man: he earned a doctorate in canon law, and had professions that included being a mathematician, astronomer, physician, translator, local governor, diplomat, and economist.

In 1517 he derived a fundamental concept in economics about a quantity theory of money which led to the formulation of an economic principle that later came to be called Gresham's law. In 1543 his book "De revolutionibus orbium coelestium" ("On the Revolutions of the Celestial Spheres"), was a huge event in the history of science. It started the Copernican Revolution and marked a pioneering contribution to the Scientific Revolution.

Copernicus Airport Wroclaw serves Poland's fifth largest city in the country's south-west, where Copernicus studied and later was the head of an ecclesiastical school.

This question was written by 1nn1, who in 2010 had the honour of visiting Copernicus' birthplace in Torun, in northern Poland, a dream since childhood.
Source: Author LadyNym