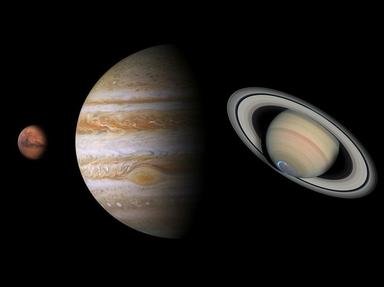 In 2008, two more dwarf planets were discovered in our solar system, bringing our major planetary bodies (not counting moons) up to 13. You probably know them very well in order from the Sun, but can you put them in order by size?

Share on Facebook
Share on Twitter
Share by E-Mail
Author
reedy
Time
3 mins
Type
Order Quiz
Quiz #
411,581
Updated
Jan 25 23
# Qns
13
Difficulty
Average
Avg Score
10 / 13
Plays
182
Last 3 plays: Guest 97 (11/13), mcdubb (13/13), skatersarehott (5/13).
Mobile instructions: Press on an answer on the right. Then, press on the question it matches on the left.
(a) Drag-and-drop from the right to the left, or (b) click on a right side answer, and then click on its destination box to move it.
Place the planets and dwarf planets in order from largest to smallest.


Jupiter is the fifth planet from the sun, but by far the largest planet in our solar system. It has a mean radius of 69,911 km / 43,441 miles, with its equatorial circumference a distance of 439,264 km / 272,946 miles. By itself, Jupiter has two and a half times the mass of every other planet in the solar system, combined.

Interestingly, Jupiter's four largest moons (Io, Europa, Ganymede, and Callisto) were the first moons to be discovered (not counting Earth's moon). They were first observed by Galileo Galilei in 1610, and are still called the Galilean moons today.
2. Saturn


The sixth planet in the solar system, Saturn is unique in its vast ring system, readily visible compared to other planets with barely noticeable rings. The main body of the planet, however, is what we are looking at for the dimensions measured in this quiz. Saturn's average radius is 58,232 km / 36,184 miles, and its circumference at the equator measures 378,675 km / 235,298 miles.

Until recently, there were 63 known moons orbiting Saturn, but 20 more were discovered in 2019. It is possible that more are yet to be discovered.
3. Uranus


For over 65 years after its discovery in 1781 by William Herschel, Uranus held the status of being the farthest planet in the solar system. With a radius of 25,362 km / 15,759 miles and an equatorial circumference of 159,354 km / 99,018 miles, it is the third on our list of planets and dwarf planets. Along with Neptune, Uranus is considered an 'ice giant,' which is defined as a giant planet 'composed mainly of elements heavier than hydrogen and helium.' (Wikipedia) Uranus also has the distinction of having the coldest atmosphere in the solar system, with lows of −224 °C (−371 °F).

Uranus has 27 moons, at last count, with the 27th discovered in 2020. They are unique among their solar system counterparts in that they are all named for figures of literature (primarily from Shakespeare).
4. Neptune


Neptune became the eighth planet in the solar system upon its discovery in 1846 by Johann Gottfried Galle. Its discovery was unique in that its existence was initially predicted mathematically by Urbain Le Verrier, which led to the observations that confirmed the math! Neptune is the fourth largest planet in our list with a radius of 24,622 km / 15,299 miles, and an equatorial circumference of 155,600 km / 96,685 miles.

2013's discovery of Hippocamp put Neptune's moon count at 14, but more interestingly, its largest moon (Triton) is unique among the solar system's large moons in that it has a retrograde orbit.
5. Earth


Of course, the four gas giants in our solar system made the top of our listing, and there is quite a drop in size to number five. You could fit 57 Earths inside Neptune. Our home planet, third from the sun and fifth largest, has a mean radius of 6,371 km / 3,959 miles, with the circumference at the equator measuring 40,075 km / 24,901 miles.


Venus is the second planet from the sun, and the sixth largest on our list of planets and dwarf planets. Not only is it Earth's closest neighbour, it is also considered a 'sister planet' to Earth, due to its similarity in size. The diameter of Venus is 6,052 km / 3,761 miles, and has a circumference of 38,025 km / 23,628, which means that it is approximately 95% of the size of Earth.

Unlike Earth, however, Venus has no moons.
7. Mars

There are two moons orbiting Mars, both of them irregular in shape, named Phobos and Deimos.
8. Mercury


The innermost and smallest of the four 'terrestrial' planets is Mercury, with a radius of 2,440 km / 1,516 miles, and an equatorial circumference of 15,329 km / 9,525 miles. Like its neighbour Venus, Mercury has no natural satellites.

And while this quiz is only considering planets and dwarf planets, it should be noted that the two largest moons in the solar system (Jupiter's Ganymede and Saturn's Titan) are both larger than Mercury.
9. Pluto


When Pluto was discovered by Clyde W. Tombaugh in 1930, it was dubbed the ninth planet of the solar system. This changed in 2006 when it was downgraded to the status of the newly-defined 'dwarf planet.' On our list of 13 planets and dwarf planets, however, Pluto holds onto place number nine, and is the largest of the five dwarf planets, with a mean radius of 1,188 km / 738 miles and an equatorial circumference of 7,232 km / 4,494 miles.

There are a few other moons in the solar system that are smaller than Mercury, but bigger than Pluto. In order from largest to smallest, they are: Jupiter's Callisto and Io, Earth's Moon, Jupiter's Europa, and Neptune's Triton.


Almost identical in size to Pluto is the dwarf planet Eris, which was discovered in 2005. It is the farthest dwarf planet, about three times further away from the sun than Pluto. Its mean radius is estimated at 1,163 km / 723 miles.

One moon was discovered orbiting Eris in the same year, which was named Dysnomia (Eris' daughter in Greek mythology). It is possible that there are more to be discovered, but Eris' great distance from us makes it very difficult.
11. Haumea


Haumea is the third largest dwarf planet in our solar system, just slightly larger than Uranus' moon Titania. Haumea was discovered in 2004 and in 2008 was named after the Hawaiian goddess of childbirth. Its mean radius is measured at 816 km / 507 miles. It is ellipsoidal in shape, and its first two moons, discovered in 2005, were named Hiʻiaka and Namaka (also Hawaiian goddesses).
12. Makemake


There are four moons that orbit Saturn and Uranus that are smaller than Haumea, but are bigger than the dwarf planet Makemake. In order, they are Uranus' Titania, Saturn's Rhea, Uranus' Oberon, and Saturn's Iapetus. Makemake, discovered in 2005, has a mean radius of 715 km / 444 miles.

Makemake was named for the chief god of the Rapa Nui (Easter Island) people. While observations of Makemake have been limited, the first moon orbiting the dwarf planet was discovered in 2015.
13. Ceres


The other four dwarf planets in our solar system are all 'Trans-Neptunian,' meaning that their orbit is beyond that of Neptune. Our final dwarf planet, landing at number 13 on the list, is actually located in the asteroid belt between Mars and Jupiter. It was the first dwarf planet to be discovered (in 1801), although it was classified as an asteroid at the time. It was upgraded to dwarf planet status at the same time that Pluto was downgraded (2006).

Related Quizzes
This quiz is part of series Look to the Heavens: