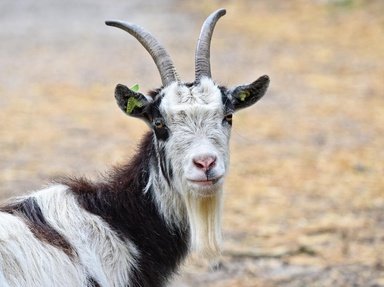 Do You Get Your Goat? Trivia Quiz

Goats are often unfairly perceived to be stubborn, dirty and unintelligent. Even the Bible has some uncomplimentary things to say about them. Here's a quiz that hopefully will have you seeing goats in a new light!

Share on Facebook
Share on Twitter
Share by E-Mail
Author
sally0malley
Time
4 mins
Type
Multiple Choice
Quiz #
370,683
Updated
Dec 03 21
# Qns
10
Difficulty
Average
Avg Score
7 / 10
Plays
594
This quiz has 2 formats: you can play it as a or as shown below.
Scroll down to the bottom for the answer key.

Quiz Answer Key and Fun Facts
1. Congratulations on your new addition to the family--a backyard goat! One morning your goat is standing on the hood (bonnet) of your car and making quite a noise. What is he/she telling you?

In addition, a lonely goat will invade your garden, sit on your porch or even attempt escape. A lonely goat will be a noisy goat because it will constantly call for a companion.
2. Goats will eat a variety of unwanted vegetation in open fields, woodlands and backyards providing an excellent alternative to machines and pesticides. Which of the following is NOT an advantage?


Answer: Goats will keep your lawn trim by grazing.

Goats love broad leafed material like brush and field vegetation that is a nuisance, however they will leave the grass to grow. Herbicides can seep into water dangerously affecting other animals, humans and plant life. A goat's narrow triangular mouth allows it to crush its food thus destroying seeds from unwanted plants.

As an added "bonus", goats fertilize as they graze, then trample the fertilizer, so the grass and other vegetation left behind are given a "natural boost"!
3. Goats should be kept exclusively with other goats.

Goats are known to accept animals of other species as companions, including horses and cattle, and are sometimes kept with racehorses as a companion animal. This is believed to have a calming effect on the horse. The phrase "get your goat" is rumored to have originated from the practice of stealing the companion goat so the competing racehorse would be nervous and agitated and would do poorly in a race.
4. Goats have a prehensile upper lip and tongue enabling them to investigate by "mouthing". What is the meaning of "prehensile"?

By using their lips and tongues, they investigate and "mouth" something to see if they like it; they are "exploring"! Goats are very clean eaters and will even refuse food that is spoiled or fallen on the ground.
5. Which of the following is a goat's unique way of "sounding an alarm"?

Goats use a sneeze to warn each other of danger-- real or imaginary. Young goats sneeze as part of their play. Older goats head butt to play, but more often to fight.
6. Which white or cream colored breed, originally from a Swiss valley, is known for their productivity as well as their tendency for mischief?

Saanens are affectionate and lovable, have a "peppy" personality and will enjoy "entertaining" your children. They are among the top producing dairy goats. But keep in mind their light-colored skin predisposes them to skin cancer and they don't do well in hot, sunny climates.
7. Which breed, with its long floppy ears and distinctive round "Roman nose", is recognized as being social, outgoing and very vocal?

A Nubian will get you out of bed demanding its breakfast. If they are alone they will express their distress by calling out until you get them a companion. Some have been described as always complaining! However, they are highly intelligent animals. Once shown the correct way of doing something, such as being led to be milked, a Nubian will walk itself, jump up and wait.
8. Goats like to be petted on their heads just like dogs.

Goats prefer their chests and underarms scratched rather than the top of their heads. They have eyes that can see almost 360 degrees around (even behind them) but they can't see above them very well. When you pet them on their heads they can't see what you are doing and it can make them nervous.
9. Goats are naturally curious and have been known to open gates' latches.

Goats are intelligent and talented escape artists, therefore sturdy fencing is essential. If a goat discovers a weakness in a fence it will surely take advantage of it and other goats will quickly learn the same.
10. What does it mean when a new mother "paws" at her kid?


Answer: She is "urging" it to move and nurse.

Some new mothers will paw repeatedly at their new kids even though they are not intentionally trying to hurt them. If a mother refuses a kid, she will ignore it, or butt at it with her head in an effort to get it to leave her alone.
Source: Author sally0malley

This quiz was reviewed by FunTrivia editor guitargoddess before going online.
Any errors found in FunTrivia content are routinely corrected through our feedback system.
Most Recent Scores
Jan 21 2023 : Guest 50: 6/10
Jan 13 2023 : Raven113: 7/10 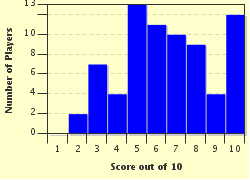 Related Quizzes
This quiz is part of series You're An Animal:

Here's an assortment of quizzes with an animal theme.


1. Do You Get Your Goat? Average
2. Not So Sheepish Sheep Average
3. In Praise of the Siberian Cat Average
4. This Quiz Isn't Just Cattle Prattle Average
5. The Four-Legged Heroes of 9/11 Tough


Other Destinations
Explore Other Quizzes by sally0malley