Watch Out! They're Dangerous! Quiz

As a young child, who spent a lot of time fishing with her dad, it never occurred to me to be afraid of our quarry. Now I know!

Quiz Answer Key and Fun Facts
1. How does an electric eel use its powerful shocks?


Answer: For any of these reasons.

With a scientific classification that is closer to carp and catfish, the electric eel really is a fish, not an eel! Its body contains specialized cells called electrocytes, which store power until needed; the shock that they can release is estimated to be at least six hundred volts. Attacks on humans are rare, but respiratory and heart failure can occur after several shocks.
2. Shown on the former currency of Zimbabwe, this ferocious fish is found in many African waters including the Congo River and Lake Tanganyika. Interestingly, its namesake is found on the continent of Asia. Name the fish.

There are several species of fish that are called "tiger fish", but make no mistake. This one was not named for his stripes; his name comes from his teeth! A Goliath tigerfish, the largest of the species on record, was five feet long and weighed 154 pounds.

They have been observed hunting in groups and even capturing birds in flight! Local people claim it is the only animal unafraid of the crocodile, and they are known to attack ones that are small. It is lightning-fast with has 32 razorlike teeth.

It is said that when the teeth clamp down, they most likely will cut the prey in half. Why would anyone want to fish for this monster?
3. Found in the waters of the Kali River in India and Nepal, to what family of fish does the goonch fish belong?

The goonch fish has been blamed for several attacks on humans in the Kali River. Locals say the fish had developed a taste for human flesh because of practice of discarding the remains of funeral pyres on the banks of the river. When the attacks first began, no one really was able to get a good look at the animal; some described it as an "elongated pig". Jeremy Wade, a British biologist, was intrigued by the story. Ultimately a six foot goonch was captured that weighed 166 pounds; it is believed that larger ones exist! My advice: avoid swimming in the Kali River!
4. That is not a rock! There is a lot of discussion regarding whether the poison from this fish kills an individual or if the pain from the sting does. Name this fish!

Found in the tropical waters of the Indian and Pacific Oceans, the stonefish lives close to coral reefs and underwater rocks. It also buries itself in the sands of shallow coastal waters. What happens is that while walking in the shallow water, humans will step on it.

When that happens, the stonefish will erect spines; each spine has a gland at its base that produces poison. The more pressure placed on the fish, the more poison is released. This venom can cause paralysis and heart failure. In addition, the stonefish can survive out of the water for a day. Doesn't that make you want to stay away from the beaches of Australia? According to the Annual Report in 2008 of Queensland Poisons Information Centre, stonefish antivenom is the second most administered antivenom in Australia.
5. Which fish, who looks more like a reptile, can live on land for as long as four days as long as it is wet?

This fish, a top-level predator, causes concern because it has no known natural enemies. Some sources say that the snakehead fish will eat all of the living organisms in one pond, and then make their way, wiggling on land, to the next pond. Mating as often as five times a year, a female is estimated to be able to produce 150,000 eggs in two years! It appears that the threat posed by the fish is more to other fish than humans; it is a popular sport fish and said to be a tasty meal! Because it can live for so long out of the water, vendors can sell it fresh. Native to Asia and Africa, the snakehead fish can be found occasionally in streams in Maryland and Virginia.

Incidentally, if a fisherperson catches one, she is required by law to kill and report it!
6. What nickname does the fish "Vandellia cirrhosa", from the Amazon and Orinoco Basins, have that is based on the legend about its need for human blood?

The first published reports of "Vandellia cirrhosa", a type of catfish, being attracted to human blood and urine have largely been discounted as being false. As it is a small fish, it does appear to enter the gill cavity of other fish to suck blood; in less than five seconds it inserts its teeth into the host's artery and engorges itself so much that the blood can be seen through its translucent body.

While the danger caused by this fish seems to be the stuff myths are made of, my advise would be - don't take any chances.
7. Although this fish looks rather innocuous in the picture, it is said that this sharp-toothed native of the Amazon and Orinoco Basins is a carnivore. Watch out for which fish?

Does the piranha deserve the reputation it has of being a man eater? The first stories of this fish that came to light were probably told by Teddy Roosevelt, who recounted a story about seeing a pack devour a cow. Some believe that local people had kept the fish in a tank without feeding them in preparation for Roosevelt's visit. Upon releasing them back into the water, they also tossed in the carcass of a dead cow. No big feat! It is estimated that it would take 300-500 of the fish to strip the flesh of an 180 pound human in five minutes - an event that is highly unlikely.

The bottom line? Usually piranhas eat insects, bugs, worms, or maybe even each other! The cases of them going after mammals are believed to have happened only when the organism was already dead or dying. Also, there are times, for example when the water level is low, when they might be more prone to attack. It seems they are attracted by splashing in the water; this may explain why many of their victims are children. In most cases the attacks are described as "nips", rather than ingestion of the individual. Still, it may be best to stay out of the waters they inhabit, and many areas do post warnings!
8. Which fish, believed to be the most poisonous in the world, is considered a delicacy in some Asian countries?

It is amazing that even though a pufferfish's poison, tetrodotoxin, can be more than 1200 times more poisonous than cyanide, people consider them to be a delicacy! With no known antidote, there is enough poison in one fish to kill thirty adults! The meat of the fish, called fugu, is prepared by specially trained chefs; there are, however, several poisonings reported every year, and a few deaths.

It would seem that the danger from this fish comes from perhaps a poor decision to eat it!
9. What is the common name for "Pterois", an aggressive fish that lives in the Indian and Pacific Oceans? Don't get too close to its fin rays. The sting can make a person roaring uncomfortable!

Adult lionfish don't have many predators - except for maybe each other! Larger lionfish have been known to be cannibalistic! Many would-be predators are kept away by the poisonous spines; an adult lionfish may have as many as eighteen of them. While it is believed that the amount of venom released would rarely be fatal to a human, being stung can cause vomiting, dizziness, and convulsions, among other symptoms.

It may also cause a severe allergic reaction which could potentially be life-threatening if left untreated. Nevertheless, they are a popular aquarium fish!
10. Also called the "Dracula fish", which native of the Amazon Basin is a popular sport fish because of its impressive fight when hooked?

This fish, which can reach a length of forty-seven inches and weigh forty pounds, is truly impressive. Also called a "vampire fish", it has two long fangs growing from its lower jaw which it uses to impale its victims. Its victims, however, are not human.

They are other fish that can be up to half the size of the attacking payara. Anglers love these fish because they are strong, impressive fighters when hooked. They are popular aquarium fish, but be careful! They will eat the fish that will fit in their mouths!
Source: Author ponycargirl 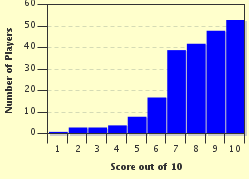 Related Quizzes
This quiz is part of series Birds & Fish:

These quizzes have been inspired by my father's love for trout fishing and care for God's creatures.


1. Those Cute Downy Hatchlings! Average
2. Those Cute Fluffy Turkeys! Average
3. Best of the Best: Birding Around The World Tough
4. It's In The Birdseed! Average
5. Choosing A Bird Feeder! Average
6. Trolling For Trout Average
7. I Caught What?! Easier
8. Watch Out! They're Dangerous! Easier
9. Catch Them If You Can! Easier
10. I Caught a Fish This Big! Average