Amateur radio, also known as ham radio, is a hobby that is enjoyed by hundreds of thousands of people all across the world. From just chit chatting on the airwaves to providing emergency communications, radio hams enjoy many aspects of this hobby.

Quiz Answer Key and Fun Facts
1. At the end of a conversation ham operators will say "73" to the person they are talking with. What does "73" mean?

Although hams use many different modes of communication such as voice, digital and even television the original mode was Morse code. In order to save time many abbreviations were created by Morse users and 73 is used to sign off with a friendly good-by. Of course, if you are talking with that special someone a different number is used, 88, which means "love and kisses"
2. In the United States what speed of Morse code must a prospective ham be able to accurately read in order to get their amateur radio license?


Answer: Zero, The Ability To Copy Morse Code Is Not Required

In 2007 the Federal Communications Commission dropped the Morse code requirement for hams. In order to receive an amateur radio license you only have to pass a written examination.
3. Using a hand held "walkie-talkie", some hams can talk with another amateur that is 100 miles away by utilizing what device?

Repeaters are usually located at the top of a tall structure such as a building, tower or mountain top. The repeater simply receives the signal from one radio and re-transmits it to another. Because of the height, the repeater can greatly extend the range of a hand held or mobile radio.
4. If the election had gone in a different direction this long time amateur radio operator would have probably had a ham antenna on the roof of the White House. Who is he?

Senator Barry Goldwater lost the 1964 Presidential election to Lyndon Johnson. Senator Goldwater, who was known on the air as K7UGA was a ham for many years and during the Vietnam War provided a radio/telephone link to thousands of GIs and their families.
5. Usually costing around $45 to build, this simple wire antenna is used by many hams to communicate around the world. What is it?

The easy to build dipole antenna is often strung between two trees with a feedline running from the antenna to the radio. Cheap and easy to build, it is capable of world wide communications.
6. Many US hams participate in a national program to help provide reports and warnings for storms and tornadoes. Not limited to ham operators, what is the name of this program?

Since the early 1970s the Skywarn program has enabled volunteer storm spotters to communicate information to the National Weather Service about severe weather activity.
7. In ham lingo, an unmarried female ham is known as a "YL" which stands for "young lady". Once she becomes married, what is she called?

Again, dating back to the Morse code abbreviations the terms YL and XYL have stuck. You might hear a ham comment that he is "getting ready to take the XYL out to dinner." All guy hams are referred to as "OM", Old Man!
8. Many countries have a fraternal organization of ham radio operators. What's the name of the largest amateur radio organization in the United States?

Founded in 1914 the American Radio Relay League (ARRL) has over 150,000 members. They publish a monthly amateur radio magazine called QST and provide many services for their members.
9. What is the ARISS program?

ARISS is a program that enables astronauts on the space station to communicate with groups such as school students. Volunteer ham operators set up their equipment in classrooms and the students can chat with the astronauts and ask questions. Even though they are in space, the astronauts still have to have a valid amateur radio license to communicate back to hams on earth; that's why most of the members of the astronaut corps are licensed hams.
10. Used mostly when communicating with Morse code, what is the name for a group of abbreviations for such things as location or to tell the other ham to move to another frequency?

Q Signals are used to abbreviate a conversation, particularly when sending Morse code. For example instead of sending or saying "my location is in Miami Florida" a ham would transmit "QTH Miami FL".
Source: Author rocknrun 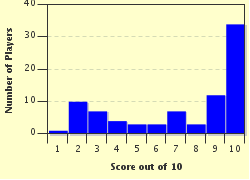 
Other Destinations
Explore Other Quizzes by rocknrun