How well do you know Kirsten Larson from the "American Girl" series?

Quiz Answer Key and Fun Facts
1. Where is Kirsten from?

Kirsten and her family left Sweden for American to live with her uncle. They came over in 1854 on a boat.
2. Where in America did Kirsten live?

Kirsten lived in Minnesota. Other American girls lived in other places: Rebecca and Samantha in New York, Felicity in Virginia, and Julie in California.
3. Who was Kirsten's friend on the boat with her to America?

Marta was Kirsten's friend. She died of cholera before they could reach Minnesota.
4. What did Kirsten have to leave in the trunk in Riverton?

Kirsten had to leave her doll Sari in the trunk. She missed the doll very much, and created a 'little Sari' until she was reunited with her doll at Christmastime.
5. What was the name of Kirsten's secret Indian friend?

St. Lucia's Day is on December 13th. It is mostly celebrated in Scandinavian countries like Sweden, Norway, and Denmark. Because St. Lucia was Italian it has also been known to be celebrated in Italy.
7. When was Kirsten born?

Clearly stated in the fourth book, "Kirsten Larson, born June 8, 1845, Ryd, Sweden." It is written in their family bible.
8. When Kirsten was going to fetch the honey from her bee tree, what animals did she run into?

Kirsten's dog Caro got them in trouble. He went after a baby black bear and the mother bear was not happy.
9. What animal started the fire in the Larson's home?

Kirsten while on the trap line had found a baby raccoon. It wasn't hurt but she made a mistake by bringing it into the house. It knocked over an oil lamp, that started a fire.
10. What is the name of Kirsten's cat? 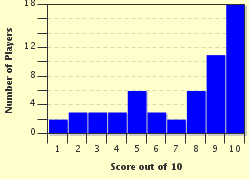 
Other Destinations
Explore Other Quizzes by IrishAngel24

Go to Books by Series Quizzes