So You Want To Be A Scientist? Quiz

Who wouldn't want to be a scientist? There are so many interesting fields of study from which to choose. See if you can match the following scientists with their broad area of expertise.

Think of the wide variety of plants on earth that a botanist may study! While some study the structure of certain plants, others may conduct experiments to see how plants grow under certain conditions. A botanist who enjoys the outdoors may pursue a career in forestry, and one who is mathematically inclined may choose to study genetics. Think about how important this job is - humans could not live without plants.

Not only do they provide oxygen for us to breathe, they also provide needed nutrition.
2. Paleontologist

A paleontologist studies the history of life on earth by putting together pieces of evidence provided by fossils and making educated conclusions. While some paleontologists focus on studying dinosaurs, there is really much more to learn and analyze about other animals and plants that lived in the geological past whose remains became preserved in the earth.

A successful paleontologist must know a lot about biology and geology, and will be able to choose from many subdivisions in the field for their specialty, such as paleobotany, the study of plant fossils, or vertebrate paleontology, which is the study of fossils of animals that have backbones.
3. Astronomer

An astronomer can explore the mysteries of the universe in two main ways. They can gather and analyze information and use what they find to formulate theories about the stars, planets, galaxies, black holes, and other heavenly bodies. They may even try to look for undiscovered planets.

The other option is that they can work in an applied field, such as space flight or communications satellites.
4. Geographer

Geography is a very broad topic, and there are many different opportunities available to someone who wants to become a geographer. The broad category of geography is divided into two main subdivisions: human geography studies a wide variety of ways that human cultures interact with the earth's resources, and can been further divided into economic geography, medical geography, cultural geography, political geography, and more. Physical geographers study the physical aspects of the surface of the earth, such as landforms and glaciers.
5. Meteorologist

Meteorologists study and predict the weather, and in doing so may have a variety of different jobs. Some meteorologists are seen on the television station forecasting the weather, while others may be involved in research. Their job involves more than just telling us what the weather will be; they also study all the different ways that weather affects our lives.
6. Seismologist

Actually, a seismologist does not only study earthquakes; he or she also studies the results of earthquakes, which may include tsunamis or landslides. In addition, a seismologist may study active volcanoes to look for signs of potential eruptions, or work in the petroleum industry to find underground sources of natural gas or oil.
7. Cytologist

A cytologist works with a medical doctor to analyze blood and tissues samples of patients. They study these samples under a microscope and compare them to other samples that are known to be healthy in order to look for diseases, such as cancer. While cytologists usually work in labs, they do collaborate with other medical professionals to determine a final diagnosis.
8. Zoologist

A zoologist studies animals, either in their natural habitat, in captivity or both. Because there are so many species of animals, a zoologist may even pick a particular one to study; for example, cetologists study whales, dolphins, and seals, and ichthyologists study fish.

The information collected by zoologists is especially important in protecting animals from problems such as disease, habitat loss, and climate change.
9. Agronomist

Although the obvious field of study for an agronomist might be how to produce more food, these scientists also study the cultivation of plants that can produce fuels and fabrics. Their main concern is how to produce quality plants that can yield more. Many times an agronomist will spend his or her time performing experiments that will produce a better plant.
10. Ethologist

An ethologist attempts to understand the reasons behind animal behaviors. Considered to be a subset of zoology, ethnology studies animal mating habits, aggression, and communication. While it might seem like most ethologists might work in zoos or research centers, many times an ethologist works in the animals' natural habitat. Be careful not to confuse this science with behaviorism! Behaviorists study the learned behavior of animals in a controlled environment; ethologists study instinctive behavior in an animal's natural environment.
Source: Author ponycargirl 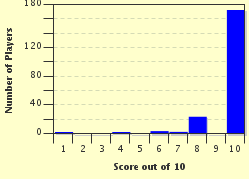 These quizzes were written for the Fun Trivia Sprint Reloaded 2017.