...with nine questions across different categories whose answers should suggest a musical item - the answer to question ten.

Quiz Answer Key and Fun Facts
1. What name links "Harpo" Marx, the creator of the Adidas sportswear company, and a Nazi war criminal who was captured in Argentina and executed in Israel?


Answer: Adolf or variations of that name

"Harpo" Marx was born Adolph Marx in 1888. He disliked the name and changed it to Arthur in 1911. His first screen appearance with his brothers was in 1921.

Adolf Dassler started producing sports shoes after he returned home to Herzogenaurach after the First World War. He worked with his brother Rudolf. When their relationship broke down, he formed Adidas in 1948, and his brother formed Puma.

Adolf Eichmann was one of the prime movers in the Holocaust. He was captured in Argentina by Mossad in 1960 and hanged in 1962.
2. What links crimewriter Georges Simenon, the statue known as Manneken Pis, and cyclist Eddy Merckx?

The Manneken Pis, featuring a small boy urinating in a fountain, is one of the famous sights of Brussels, dating from the early 17th century.

Edouard Louis Joseph, Baron Merckx, known as Eddy Merckx and nicknamed "The Cannibal", was one of the greatest road cyclists of all time. He won the Tour de France and the Giro d'Italia five times each between 1968 and 1974.
3. What surname links "The Cruel Sea" (1953), the cabin boy from "Treasure Island" and the singer of "Damn I Wish I Was Your Lover"?

"The Cruel Sea" is a film about the WWII Battle of the Atlantic directed by Charles Frend and starring Jack Hawkins as a naval commander.

Robert Louis Stevenson's "Treasure Island" was initially published in instalments between 1881 and 1882. It concerned the adventures of Jim Hawkins and the mutinous Long John Silver.

Sophie B. Hawkins is an American singer who has also had hits with "As I Lay Me Down" and "Only Love (The Ballad of Sleeping Beauty)".
4. What links Hagrid, a sheriff from "The Dukes of Hazzard", and the fourth pet cat of "The Simpsons"?

Robbie Coltrane has had a varied career as an actor, with notable roles in "Cracker", "Tutti Frutti", "GoldenEye" and in Comic Strip's "GLC", where he played Charles Bronson playing nasal London politician Ken Livingstone. He will always be remembered primarily as Rubeus Hagrid in the eight "Harry Potter" movies between 2001 and 2011.

Sheriff Rosco P. Coltrane, played by James Best, was the hopelessly inefficient and reliably avaricious sheriff of Hazzard County, who acted as the agent of the scheming Boss Hogg.

Coltrane was a white cat who resembled Bart. He didn't last long.
5. What surname links a highly influential American dictionary creator called Noah; a family including Kevin, Sally and Rosie from "Coronation Street"; and a Faustian short story by Stephen Vincent Benét that features a fictionalised version of Daniel, an influential US senator and also Secretary of State under three presidents?

Noah Webster was a founding father of the United States. He was highly influential in defining and codifying the American form of English through his great dictionary that was originally published as the "American Dictionary of the English Language" in 1828.

Kevin Webster was a "Coronation Street" character played by Michael Le Vell for over thirty years. He married Sally Seddon and their tumultuous marriage produced two daughters - Rosie and Sophie.

"The Devil and Daniel Webster" was first published in 1936. It concerns a farmer who makes a pact with "Mr Scratch", to sell his soul for prosperity. When the devil claims his property, the farmer enlists the great lawyer Daniel Webster to argue his case in a trial, and the great man succeeds.

Daniel Webster (1782-1852) was one of the most highly regarded lawyers of his day and, in 1957, a Senate committee declared him one of the five greatest US senators. A strong advocate of the Union in turbulent times, he had three unsuccessful bids to become President. He was Secretary of State under William Harrison, John Tyler and Millard Fillmore.
6. What links the Super Bowl winning quarterback who is descended from the second president of The Church of Jesus Christ of Latter-day Saints, the singer of "It's Four in the Morning", and the Scottish presenter of "Desert Island Discs" and "Crimewatch"?

Jon Steven "Steve" Young, a great-great-great-grandson of Brigham Young, was a highly successful quarterback in the NFL, winning the Super Bowl as most valuable player with the San Francisco 49ers in 1995.

Faron Young was an American country singer who had hit singles in five decades from the 1950s to the 1990s, including "If You Ain't Lovin' (You Ain't Livin')" and "Live Fast, Love Hard, Die Young".

Kirsty Young worked for the BBC and Channel 5 in roles from continuity announcer to news reader. She took over from Sue Lawley on BBC Radio 4's long-running "Desert Island Discs" in 2006 and Fiona Bruce on BBC1's "Crimewatch" TV programme in 2007.
7. What links the man who won Olympic marathon gold in 1972 and silver in 1976, the scaled down two-volume version of the Oxford English Dictionary, and the award-winning biography "Stuart: A Life Backwards"?

Frank Shorter was an American runner whose marathon victory at the 1972 Munich Olympics and silver by 51 seconds in Montreal (behind Cierpinski) had an influence on the increase in the popularity of running in the USA in the '70s.

The "Shorter Oxford English Dictionary" was first produced in 1933. It is available as a hardback book or on CD-ROM.

"Stuart: A Life Backwards" was an extraordinary biography written by Alexander Masters about his friend Stuart Clive Shorter, whose troubled life of mental illness, homelessness, criminality, addiction and campaigning activism was cut short at 33. It won the "Guardian First Book Award" in 2005.
8. What links the outlaw partner of Clyde Barrow, the Dutch-born manager of Elvis Presley, and the secret identity of Spider-Man?

Bonnie Elizabeth Parker (1910-1934) and Clyde Barrow's gang is believed to have killed at least nine police officers and several other people, in their crime spree in the 1930s.

Colonel Thomas Andrew "Tom" Parker was born Andreas Cornelis van Kuijk in Breda in 1909. He exercised complete control over Elvis Presley's career - some say this extended to preventing the great singer from touring abroad because of irregularities in Parker's residency.

Spider-Man's first appearance was in August 1962. He was a lonely high school student bitten by a radioactive spider who gained extraordinary abilities.
9. What links the Church of Scotland, a fictional captain with the middle name Tiberius, and "Spartacus"?

The Church of Scotland, which is the established church of the official religion in Scotland, is known informally as the Kirk.

William Shatner played James Tiberius Kirk in various incarnations of "Star Trek" from 1966 until 1994. Chris Pine took over in the 2009 reboot.

Stanley Kubrick's 1960 movie "Spartacus" starred Kirk Douglas as the eponymous leader of a slave revolt set in ancient Rome.
10. Hopefully, some of the nine previous answers suggest something musical to you. Perhaps there were some questions you were unsure of that you could revisit in light of that? Anyhow, what is the musical instrument that links the answers to questions 1-9?

Antoine-Joseph "ADOLPHE (1)" Sax (1814-1894) was a prolific inventor of musical instruments, including the saxotromba, the saxhorn and the saxtuba. His most famous creation is the the SAXOPHONE.

He was born in Dinant, which is in present-day BELGIUM(2).

Coleman HAWKINS (3) (1904-1969) was one of the most influential tenor saxophonists in jazz, from big bands and swing through to bebop. He did more than anyone to bring the sax to the fore. His recording of "Body and Soul" has been entered into the US National Recording Registry.

John COLTRANE (4)(1926-1967) was highly influential and prolific, playing tenor, alto and soprano sax alongside the likes of Miles Davis, Duke Ellington and Charlie Parker. He moved the art form along through bop to free jazz. His manuscript for the landmark album "A Love Supreme" is held as one of the National Museum of American History's "Treasures of American History" in the Smithsonian.

Ben WEBSTER (5) (1909-1973) was one of the great swing tenors. His work with Duke Ellington alongside the great alto Johnny Hodges was notable, as was his work with Oscar Peterson including "King of the Tenors".

Lester YOUNG (6) (1909-1959) was another great swing tenor who developed the language of jazz as well as the language jazz people spoke. His cool work was integral to the success of the Count Basie orchestra. Billie Holiday gave him the nickname "Pres", short for President.

Wayne SHORTER (7) (born 1933) was a prolific composer and practitioner on soprano and tenor. He was famed for his work with Miles Davis, Art Blakey and Weather Report.

Charles "Charlie" PARKER (8), Jr. (1920-1955) aka "Bird" or "Yardbird" was a pioneer of bebop and one of the most influential and greatest musicians of the twentieth century. He changed the jazz art form with new harmonic ideas, drawing on diverse musical influences from outside of jazz. Miles Davis summed up his contribution thus: "You can tell the history of jazz in four words: Louis Armstrong. Charlie Parker." His landmark session where "Ko-Ko" was recorded in 1945, with personnel including Max Roach and Miles Davis, is one of the first where bebop was recorded. He unfortunately also set a template for jazz players' lifestyles and, when he died at 34 of a heart attack, the coroner who examined his body thought he must be between 50 and 60 years old.

Rahsaan Roland KIRK (9) (1935-1977) was a multi-instrumentalist who could play several instruments at once, including up to three saxophones. He worked with Charles Mingus and Quincy Jones, but mainly led his own bands. His influence spread beyond jazz to musicians such as Jimi Hendrix and Jethro Tull's Ian Anderson.
Source: Author Upstart3 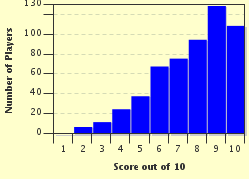 Related Quizzes
This quiz is part of series If you like them : Common Bonds:

Some Common Bond quizzes I've done. The questions are a general mixture, and they should hint at the answer to the last question. Hope you like them.