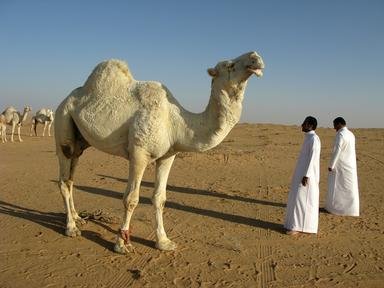 Let's go to one of the nice places on Earth - Saudi Arabia. Get ready to enjoy the adventure! All the best! :)

A multiple-choice quiz by me07. Estimated time: 4 mins.

Most of the country's central and eastern areas consist of waterless plateaus and deserts.
3. Saudi Arabia is divided into how many provinces?

The King appoints a governor who leads each province. Local leaders administer smaller towns and villages. The provinces are called 'mintaqat' (singular - mintaqah). They are Al Bahah, Al Hudud ash Shamaliyah, Al Jawf, Al Madinah, Al Qasim, Ar Riyad, Ash Sharqiyah (Eastern Province), 'Asir, Ha'il, Jizan, Makkah, Najran and Tabuk.
4. You would find many "souqs" in Saudi Arabia. But do you know what a "souq" is?

This market sells pots, pans and cooking utensils.
5. Where in Saudi Arabia would you find the Rub Al Khali Desert?

The Rub Al Khali Desert covers about 647,500 square kilometres of southern Saudi Arabia. It is known as the Empty Quarter in English and is about five times the size of England.
6. Which weapon would you find on the Saudi Arabian flag?

The flag of Saudi Arabia was adopted in 1973.
7. Which of these would wear a "thawb" in Saudi Arabia? Men or women?

Beginning with 1960, the Saudi Arabian riyal equals 20 kershes and 100 halalas.
9. How long has Saudi Arabia been a leading Middle Eastern nation?


Answer: Since the development of its oil industry

Saudi Arabia's oil industry developed in the mid 1900s. Some of the largest oil fields lie beneath the desert in Eastern Saudi Arabia.
10. Many of Saudi Arabia's rural people live in:

Many of Saudi Arabia's rural people still live in farm villages and oasis settlements. The rest of the people are nomads called Bedouins who roam through the deserts in search of water and pasture.
Source: Author me07 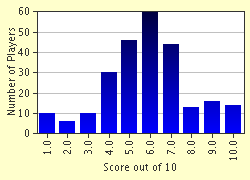 
Other Destinations
Explore Other Quizzes by me07