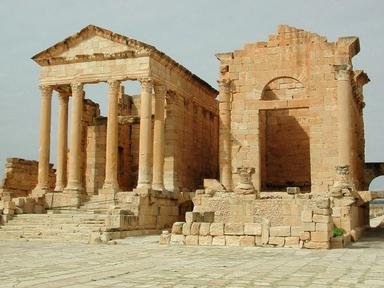 Tunis may not be as well known as it North African neighbors of Tripoli and Algiers but its history goes back millennia.

Quiz Answer Key and Fun Facts
1. In the ancient world Tunis was associated with which city-state that "must be destroyed"?

Tunis is sometimes incorrectly believed to be the same city as Carthage when they are two separate cities with Tunis being more inland and overlooking Carthage. However, the two were closely linked in many ways. Tunis was originally a Berber city originally, though it has been ruled by a number of different empires and states, including Carthage.
2. During which war was Tunis sacked and destroyed by the Romans in 146 B.C.?

The Third Punic War ended with the Roman siege and destruction of Carthage and surrounding areas, including Tunis. Thousands of people living in what is now Tunisia died, mostly from starvation. The Romans rebuilt Tunis when it began to flourish as a center of trade and agriculture. Eventually, Tunis was latinized and became one of the most important Roman cities in North Africa.
3. Tunis was refounded as a predominately Arab city in the early 8th century AD by General Hasan ibn al-Nu'man. That was actually his second attempt to take the city, having lost in battle once before to which Berber queen?

Dihya was a Berber queen who allied with the Byzantines to keep Tunis and Ifriqiya out of Muslim hands. She defeated Hasan ib al-Nu'man in 698 after he had taken Carthage. Hasan returned a few years later and killed Dihya in battle. Dihya was hurt by her scorched earth warfare because it lost her the support of some of her people, especially the nomads and people who lived in the desert outskirts of the city who had limited supplies to begin with.
4. Which of the following best describes the situation in Tunis following its founding as an Arab city in the 10th and 11th centuries?

Tunis, during this time, was marked by almost nonstop violence. Control of the city constantly changed between various caliphates. The biggest, though not only, cause of the violence was the oppressive rule of Shi'ite Muslim leaders who quashed all rights of Sunni Muslims.

Some Shi'ite rulers were tolerant of Sunnis but they were deposed themselves by other Shi'ites. Peace did not come until the mid 11th century when Nasir ibn Alnas, who had the support of most of the factions of people in Tunis, founded the Khurasanid Dynasty centered in Tunis and focused on trade rather than domestic affairs.
5. In around 1270, which of the following groups of people did NOT arrive in Tunis?

The Ottomans would not arrive and capture Tunis until 1534. During the late 13th century, the Reconquista of Spain was ongoing and number of Spanish Jews and Moors who had been forced to convert to Christianity had fled Spain and arrived in Tunis. Tunis, despite being under Muslim control, was seen by the Jews as being more religiously tolerant than elsewhere in the Mediterranean.

King Louis IX of France tried to invade Tunis during this time as well. His goal was to capture Tunis and convert it to Christianity. Although he did manage to capture Carthage, he failed to capture Tunis and died of dysentery before going back to France.
6. Other than the fact that Ottomans took complete control over Tunis, why was the 1574 Conquest of Tunis important?


Answer: It solidified North Africa as a Muslim region

Spain had hoped to take back parts of Northern Africa in the Maghreb region and convert them to Christianity. They had some minor successes but the Ottomans first attacked Tunis in 1534 and control of the city went back and forth for a few decades. However, the Ottomans seized Tunis for good in 1574 and took most of North Africa with it.

This firmly placed North Africa under Muslim, not Catholic, control. Islam remains the dominant religion in the region to this day. During the French rule of Tunisia beginning in the 1880s, Christians did flock to Tunis in large numbers but the main religion of Tunisois (the people of Tunis) was still Islam.
7. Under Ottoman control, Tunis began to flourish economically. What brought Tunis such prosperity during this time?

Barbary pirates were those who attacked European ships, primarily in the Mediterranean, and brought slaves and goods back to North Africa. This gave Tunis a strong economy, booming population and allowed it to advance in the arts and architecture. Tunis was one of the main ports where Barbary pirates came from.

However, Barbary pirates did cause some problems. Occasionally, they would attack friendly ships and keep the loot for themselves or destroy it. Barbary Pirates also sparked wars with Europe and even the United States when that country became independent.
8. In 1756, Tunis was captured yet again by a foreign power. Which foreign power gained control of the city this time?

Prior to the Algerian capture of the city, Tunis was under the rule of the Husainid Dynasty. However, the members of that dynasty constantly squabbled, which weakened the city in many ways. Algeria was able to take advantage of the political situation and captured Tunis, installing Muhammad I ar-Rashid, who was also a member of the Husainid Dynasty. However, the political squabbles continued and ar-Rashid quickly fled Tunis.

The French, having gained control of Algeria, occupied the city in 1881 - much to the annoyance of the Italians, who had hoped to take the city and the surrounding area.
9. Which of the following is true in regards to Tunis' status during World War II?


Answer: It was the last place in North Africa occupied by Axis forces

Tunis fell to Axis forces in November 1942. The British liberated the city in May 1943 and was the last place held by the Axis in North Africa. While under Allied control, Tunis was used as a hub for soldiers being sent off to the Middle East. Tunis was bombed and invaded but sustained little damage to its buildings when compared to other cities.
10. Who was Mohamed Bouazizi who died in 2011 in the neighborhood of Ben Arous?

Mohamed Bouazizi was a street vendor who set himself on fire on December 17, 2010 and died in January the following year. He self immolated in response to the seizure of his shop and harassment by the government. His actions sparked the Tunisian Revolution in 2011 which ousted President Zine El Abidine Ben Ali.

This is considered the first event in the Arab Spring Uprisings which lasted until late 2012.
Source: Author Joepetz

Related Quizzes
This quiz is part of series History of World Cities - Africa:

Some history quizzes about African cities.


Other Destinations
Explore Other Quizzes by Joepetz