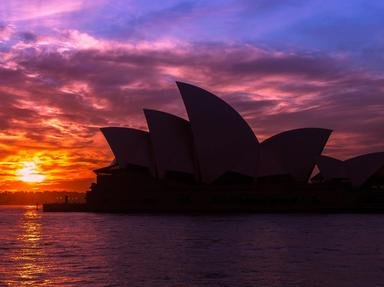 The remote interior of Australia, the area that is called the Outback, has been inhabited by the indigenous people of Australia for approximately 50,000 years. Let's explore the history of one of their most sacred sites, an area called Uluru.

Quiz Answer Key and Fun Facts
1. According to aboriginal stories of the Dreamtime, how was Uluru formed?


Answer: By their ancestral beings

According to the myths of the Dreamtime, the world had no forms or features until the ancestral beings came forth and walked across the land, creating all the living animals, plants, and other features. According to the indigenous people who are the caretakers of Uluru, "The world was once a featureless place. None of the places we know existed until creator beings, in the forms of people, plants and animals, traveled widely across the land.

Then, in a process of creation and destruction, they formed the landscape as we know it today".

Modern Aborigines believe that these ancestral beings still inhabit the land today and that they are descended from them.
2. What does the name "Uluru" mean?


Answer: It has no specific meaning

Over the years, visitors to Uluru have apparently received a number of explanations as to the meaning of the word. The truth of the matter is, however, that Uluru is a place name that has no specific meaning to the people who hold the site sacred. The name not only describes the location of the rock itself, but also the land around it and the land where the people live.

It is interesting to note that there are many names for the individual features of Uluru, such as specific locations on the rock, as well as caves and waterfalls found in the surrounding land.
3. Uluru is also known as Ayers Rock. Why?


Answer: It was named for for the Chief Secretary of South Australia.

Uluru was named Ayers Rock by William Gosse, who was Deputy Surveyor-General of South Australia and one of the first European explorers to the area. He mapped quite a bit of the region during an expedition in 1873, giving the rock formation the name of Ayers Rock.

At the time, Sir Henry Ayers was the Chief Secretary of South Australia, which meant that he had a major role in how South Australia was administered and governed. Interestingly, a dual naming policy was adopted in 1993, which allowed the area to keep both as official names.

At that time it was named "Ayers Rock/Uluru"; since then, in 2002, it was renamed "Uluru/Ayers Rock".
4. In which of the following federal divisions in Australia is Uluru located?

While the 2011 census found that 14.7% of the population is comprised of indigenous Australians, they own about 49% of the land there.

In 1985 the people agreed that in exchange for the return of the land (which had been taken from them in the 1940s in an effort to promote tourism) they would lease it and jointly manage it with the National Parks and Wildlife Agency of Australia.
5. Alice Springs is the largest town near Uluru, however, if a tourist wanted to stay closer to the park, in which much smaller town, especially built for the purpose of outfitting visitors, could he find provisions?

Alice Spring is approximately 280 miles and a five hour drive from Uluru. Visitors to the site frequent the much smaller town of Yulara, which is 11 miles from Uluru and 34 miles from Kata Tjuta. The town was built to accommodate visitors to the two sites in the late 1970s after it was determined that other facilities that had been built closer to the sites were having negative effects on the environment.

When construction of the new town was complete in 1985, the land around the rock formations was given back to the indigenous people.

The 2011 census counted 887 permanent resident of Yulara, who, of course, provide services for visitors to the area.
6. To which group in Australia is Uluru especially sacred?

Archaeological evidence suggests that indigenous people have been living in the area around Uluru for at least 10,000 years. The Pitjantjatjara Anangu, who live in the Central Australian Desert, refer to themselves as the Anangu, which originally meant "human being, person"; today, however, the term is used to describe a group of people who speak a related language.

This includes the Pitjantjatjara, Pintupi-Luritja, Southern (Titjikala) Luritja, Ngaanyatjarra, Ngaatjatjarra, and Yankunytjatjara, who languages are all very similar.

As caretakers of Uluru the Anangu are responsible for the management and protection of the land. There are certain sections of Uluru that the Anangu request that visitors do not photograph; typically these are areas that are used for specific gender-based rituals that even Anangu members of the opposite sex are forbidden to see.

The purpose of the ban on photographs is to ensure that Anangu do not inadvertently see pictures of the forbidden areas.
7. A vote by the Uluru-Kata Tjuta National Park Board decided to close Uluru to climbers beginning in October 2019. Visitors may no longer climb on the monolith.

The published visitor guide says, "the climb is not prohibited, but we prefer that, as a guest on Aṉangu land, you will choose to respect our law and culture by not climbing". This, however, is a polite request; a park management plan in 2010 stated that approximately 33% of the park's visitors did climb the rock.

The only time at present when climbing is strictly forbidden is when there are high winds present at the top. The people who are the caretakers of the area, however, have been petitioning for quite some time to close the park to climbers. On November 1, 2017, according to "CNN Travel", the members of the Uluru-Kata Tjuta National Park Board unanimously decided that, from October 2019, all climbing activities will be banned.
8. Which of the following trees, that produces wood that is used for making boomerangs, is found in Uluru?

Also called the dessert bloodwood, the "Corymbia opaca" tree provides the people in Uluru with many benefits. The roots store water; it is possible to dig them up and drain water when needed. In addition, when the bark is removed from the tree it will secret a red ooze called kino, which will harden and cover up the hole in the bark.

The Anangu people collect the ooze before it hardens and use it as a medicine on cuts and other sores. They also collect the hardened ooze and make a powder that, when boiled with water, produces an antiseptic wash.

Another tree called the mulga is also native to the area.
9. Although some might call Uluru a monolith, it is more correctly described by which of the following terms?

A comparison of the two terms in the "Merriam-Webster" dictionary immediately identifies why Uluru is NOT really a monolith. According to its definition, a monolith is "a single great stone often in the form of an obelisk or column", while an inselberg is "an isolated mountain". Did you know that Uluru appears to change colors at different times of the day? It radiates a reddish color at dawn and sunset.

The reason? The light that reaches it at those times of day is from the red end of the color spectrum; the color of Uluru, typically a reddish-brown due to the surface oxidation of its iron content, is naturally enhanced. If it wasn't for the surface oxidation, Uluru would be gray.
10. A large part of Uluru is located underground.

It is believed to have been situated at the bottom of a great inland sea in the distant geological past.
Source: Author ponycargirl

Related Quizzes
This quiz is part of series My Aussie Mix:

A short trek through Australian history, have fun!