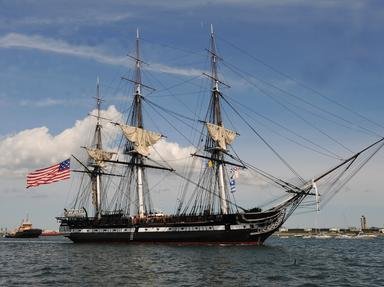 It is time to continue the journey down the historical time line of American History. If you took Test #1, welcome back for another quiz. Good luck!

Henry Hudson, sailing his ship "Half Moon", explored the Hudson River in present day New York State. He sailed as far inland as present day Albany looking for a Northwest Passage across or past the American mainland to the Pacific. He also explored the bay in northern Canada that bears his name, although this land was not claimed for the Netherlands.
2. What was Hudson looking for in the New World?

The Northwest Passage was as sought after as El Dorado.
3. The explorer Samuel de Champlain claimed Canada and founded the trading outpost of Quebec for France.

The French couldn't wait to get into the race for getting wealthy from exploits in the New World. Everyone eyed the wealth that Spain was reaping from her Caribbean exploits and they wanted a piece of the pie.
4. Whom did the Indian Princess Pocahontas marry?

John Rolfe, a successful English planter, fell in love with the Indian maiden and asked her father Powhatan for her hand in marriage. The chief agreed and as a result there were peaceful relations between the Indians and the settlers until 1618 when Powhatan died.

His successor, Opechancanough, didn't trust the white settlers and was responsible for a massacre that killed one third of them.
5. Captain John Smith was forced to return to England. Why?

Captain Smith was leading a group exploring the Virginia tributaries to the Chesapeake Bay when a gunpowder keg exploded and he was badly burnt. Unable to perform his duties, he returned to England so as not to be a burden on others in the colony.
6. Pocahontas visited England but was stricken by fever and died and she is buried in England.

Pocahontas visited England and was the talk of the town. She was well received by the royal court. However she contracted a fever that killed her and she was buried in England.
7. The year 1619 is refered to as a "Red Letter Year" in the Jamestown colony. Why?


Answer: Arrival in the colony of slaves, single women and elected government

In this year single women were brought to the colony to provide wives for all the single settlers. Also, Dutch traders imported 20 black slaves from West Africa. The first black men were, strictly speaking, "indentured servants" who had to work off the payment of their passage for a specified length of time, usually seven to ten years. Actual slavery developed when it was realized that the black men were there against their will and very few spoke English.

The first local elected governing body, the House of Burgesses, took their seats in this year.
8. In 1620, 102 English Pilgrims arrived at the New World and founded a colony. Where - according to tradition - did they land?

However, the first written record of the place where the Pilgrims landed dates from 1741.

The Plymouth colony was made up of a group of Puritans, a religious group that did not agree with the Church of England. Unlike most English Puritans of the time, they were "Separatists", that is, they left the Church of England altogether instead of trying to reform it from within. It was this group of colonists that after a successful first year celebrated the first feast of Thanksgiving.
9. While on board the ship the Pilgrims signed a document. What was it called?

The Mayflower Compact was a document that set up the foundations of government of the Plymouth colony. It is agreed by historians that this document is what the American Constitution is based on.
10. In 1626 the Dutch sent settlers to the New World to establish a colony. What was the name of their outpost on the Atlantic coast?

The Dutch 'purchased' from the Indians the land around current day New York city for about $25 dollars worth of trinkets, one of the best real estate bargains of all time. The only problem was that the Indians did not recognize the theory of land ownership. This is one reason why the Dutch and the English had so much trouble with the Indians.
11. In 1630 the Massachusetts Bay Company founded the town of Boston. In the next fifteen years 20,000 settlers moved to the area. What was the name given to this influx of settlers?

This mass migration made the Massachusetts colony the largest in North America. The increase in size created other problems such as religious dissent, as not all settlers subscribed to the strict beliefs of the puritans.
12. The Swedes, not to be left out of the New World migration, founded their own colony on the Atlantic coast.

In 1638 the Swedes founded the New South Company and sent a group of settlers to build a fort called Christina on the Delaware River at the present day site of the city of Wilmington.
13. Under a land grant from the king to the Calvert family, Lord Baltimore founded a colony at St. Mary's, Maryland. What was unique about this colony?


Answer: It was the only colony founded with a Catholic majority

The colony of Maryland was founded on the principle of religious freedom for Christians.
14. Anne Hutchinson and her followers were expelled from the Massachusetts colony because of their religious beliefs and were forced to return to England.

In 1649 the Act of Religious Tolerance Act was passed by the Maryland governing body. It recognized all Christian denominations in the colony, provided they accepted the doctrine of the Trinity. In practice, it became a refuge for Catholics in the English-speaking colonies of North America.
16. In 1655 the Dutch under leadership of Peter Stuyvesant took control of the Swedish settlement along the Delaware River.

The Dutch now claimed the land from Long Island to Delaware as belonging to the Netherlands.
17. In 1664 the English annexed the Dutch colony of New Amsterdam thus giving them control of the Atlantic Coast from Carolina to Massachusetts. What was the new name given to New Amsterdam?

New Amsterdam was renamed New York, after the Duke of York, who commanded the English forces. Although the Dutch tried to reoccupy the area in 1673 the English won complete and undisputed control by treaty the following year.
18. What was the name of the oldest locally elected governing body in the English colonies?


Answer: The Virginia House of Burgesses

In 1619 the Virginia House of Burgesses met for the first time. The body consisted of local citizens, most from the upper class, that decided local laws, with final approval resting with the king of England. Arguably, the House of Representatives is descended from this colonial body.
19. What was the name of and where was the first college in the British colonies?

Harvard was the first institution of higher learning in the colonies, followed by the College of William and Mary.
20. Between the years 1610-1754 what country was pushing its influence across Canada and the Great Lakes?

The French founded several trading posts along the St. Lawrence River (Montreal and Quebec) and across the Great Lakes (Detroit and as far south as present day Pittsburgh). The French also explored the Mississippi River. (They were the first European nation to sail the entire length of the river.) They also founded settlements in present day Louisiana (New Orleans) as well as present day Arkansas.

They had better relations with the Indians because they founded small trading posts while the British wanted to own the land - a concept that was foreign to the Indians.
21. "King Philip's" war was an attempt by the British to stifle the spread of French influence in North America.

King Philip was the chief of the Wampanoag Indian tribe in Massachusetts. He was called King Philip because no one could agree on the correct spelling and pronounciation of his Indian name. He led a rebellion agaist the Massachusetts Bay colony, tired of broken promises and the stealing of Indian land.

At first he was successful, pushing the westward movement back nearly fifty miles. However, in the longer run, the Indian bow and arrow were no match against the English gun and King Philip was killed and the entire Wampanoag tribe was wiped out. All this occurred in 1675-76.
22. What was the cause of Bacon's Rebellion in the Virginia Colony?


Answer: The government's inability to protect settlers against Indian attacks

The Virginia settlers had suffered several severe massacres at the hands of the Indians after the death of Powhatan in 1622, but still the colonists spread out from the Jamestown fort. By 1676 many settlements were too far away to be defended by the Jamestown Militia. Defense of course cost money and many of the western settlers were the poorest members of the colony. Bacon led a group of armed settlers to Jamestown where they confronted the House of Burgesses and delivered a list of their demands.

When they were not acted on the group burned several public buildings. Bacon was arrested but before he could be tried he died. It is alleged that before he died he left a curse on the area. Today his house, which has been restored, is said to be haunted and on the anniversiary of his death he has been said to have seen roaming the halls.
23. In 1681 King Charles II granted a Royal Charter to the Quaker, William Penn. Which colony did he establish?

Penn founded the colony of Pennsylvania and the city of Philadelphia, also known as the "city of brotherly love" since the Quakers were a very peaceful group of settlers. They abided by the treaties they made with the Indians and as a result they had far fewer problems than other English colonies.
24. In 1689 the British and French went to war in a series of wars that lasted off and on for the next 75 years.

Most of the fighting beteen the British and French took place in Europe. However the French managed to persuade the Indians of the advantage of going to war against the English. The French offered a bounty for each English settler killed and so the practice of scalping the victims began.

This barbaric practice continued till the end of all native American hostilities in the late 19th century.
25. Why did most Native American tribes have better relations with the French rather than the British?


Answer: The French only wanted to trade with them, the British wanted their land

The Indians did not understand the concept of land ownership. To the Indians the land belonged to everyone for communal use, not to an individual. The French were mainly interested in the fur trade.
Source: Author Ironsides 163 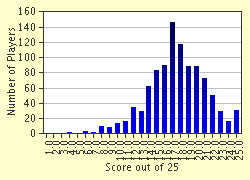 
Other Destinations
Explore Other Quizzes by Ironsides 163