This is a beginner's quiz about American coins.

Quiz Answer Key and Fun Facts
1. A coin is uncirculated. What does that mean?


Answer: This coin has not been used.

Coins are almost never perfect, even if they haven't been used. The grade of "proof" means that a special finish is used to make a coin more shiny for collectors.
2. What were dimes made of until 1964?


Answer: Same on the front, wheat ears on the back


Answer: It was made in Denver.

That D is called a mintmark. The letters P (for Philadelphia) and S (for San Francisco) can also appear on coins, though P can't appear on a penny.
5. Which President is on the front of the 2008 half dollar?

By law, living people can't be portrayed on circulating American coins.
6. What are 2008 nickels made of?


Answer: Copper with a small amount of nickel

They're called nickels, but they actually don't have much nickel in them. It's been this way since 1866.
7. Where are most modern United States coins made?

Some older coins were made in San Francisco, and some proof coins are still made there.
8. Which huge coin had Eisenhower on it?


Answer: The mold used to strike the coin

Before the coin is struck, the piece of metal manufactured to the correct size and weight is called a blank.
10. What happened to quarters, half dollars, and dollar coins in 1976?


Answer: They had a special image for the bicentennial.

Pennies, nickels and dimes were made with their regular designs in 1976.
Source: Author hotdogPi 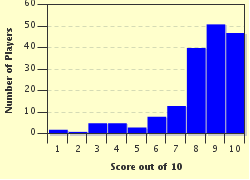 Related Quizzes
1. Classic American Coins: Nickels (Five Cents) Average
2. Classic American Coins: Large Cents Average
3. Trade Me In (If You Can) Average
4. The U. S. One Cent Coin Average
5. A Penny for Your Thoughts? Tough
6. So You Want To Be a Coin Collector Average
7. Think You Know U.S. Currency! Average
8. Odd and Curious U.S. Money Average
9. American Numismatics Average
10. Where's George (WG) Average
11. The U. S. Nickel Average
12. I Once Had Twenty-Five Quarters Difficult


Other Destinations
Explore Other Quizzes by hotdogPi