So You Want To Be a Coin Collector Quiz

Collecting coins is a fun and educational hobby. This quiz will test your knowledge about U.S. coins and basic coin collecting knowledge.

Quiz Answer Key and Fun Facts
1. What is a more formal term for coin collecting?

The first coins are believed to have been minted in in Lydia, an ancient kingdom in what is now Turkey, around 600 BC. These first coins were very crude and did not follow any set standard of weight. They were made from a naturally occuring alloy of gold and silver called electrum.

But the idea of coins caught on very quickly, and soon spread throughout the ancient world. Many Greek city states used symbols to identify their coins. Athens, for example, put an owl, a bird sacred to the goddess Athena, on its coins, while Aegina used a turtle, and coins of Corinth often showed the winged horse, Pegasus.
3. It took a while after achieving independence from Great Britain for the United States to get around to minting its own coins. When did Congress pass the first bill to establish a mint and begin producing coins for the new nation?

The Coinage Act of 1792 authorized the building of a mint and the striking of coins in copper, silver and gold. The first U.S. coins are often said to be "half dismes" struck in 1792, before the mint was even completed. Pronounced "half deem," this coin was a very small silver coin valued at five cents.

Some people do not consider these to be true coins, but merely patterns. Nevertheless, several thousand of them were produced, and they did circulate as coins. The mint was established in Philadelphia.

In 1793, it produced half cents and cents; in 1794, it began minting silver coins, and in 1795 gold coins were struck.
4. Coin collecting is a very old hobby. Augustus, the first Roman emperor, is said to have been an avid collector. So it is not surprising that special coins are often produced for collectors. Struck at higher than normal pressure on specially polished blanks, or planchets, these are sold to collectors at a premium by the mint. What are these special coins called?

The United States has been issuing proof coins since at least 1817. In 1858, it began selling sets of proof coins to collectors. The sale of proof coins was intermittent, but proof sets have been produced for sale to collectors every year since 1936, except for the years 1965 through 1967. Proof coins are very beautiful, since they have the designs stamped in high relief and are free from the bumps and scratches that coins produced for normal circulation have. Curiously, although proof coins are produced in small quantities, an uncirculated commercial strike of the same coin will often command a higher price than a proof example, because a much higher percentage of the proof coins were saved and remain in pristine condition.
5. If you acquire a nice coin for your collection, but it is dark and tarnished, what should you use to clean it?


Answer: You should not clean the coin

Cleaning a coin is almost always a bad idea. No matter how careful you are, the cleaning will leave marks on the coin. This is true even for special coin cleaning solutions that are available. Most collectors do not like cleaned coins, and cleaning will destroy much of the coin's value. If you find a coin that has been buried in the ground and is covered in dirt, the best way to remove the dirt is to soak it in distilled water. Believe it or not, tarnish can actually increase the value of a coin! Many collectors like coins that display so-called "rainbow toning," where the tarnish has acquired a variety of colors over the years.
6. As previously stated, the United States' first mint was in Philadelphia. As the nation grew, mints were opened in other cities. It was thought necessary to add a mark to each coin to show where it was made. This practice continues to the present day. What are these special marks called?

The United Sates has mints in the following cities: Philadelphia, San Francisco, Denver, and West Point, New York. In the past, there were also mints in Dahlonega, Georgia; Charlotte, North Carolina; Carson City, Nevada; and New Orleans. There was also a mint in Manila to produce coins for the Philippines. Of the four current mints, the mint mark used for Philadelphia is a "P." For Denver, a "D." For San Francisco, an "S," and for West Point, a "W." Prior to 1980, coins produced at Philadelphia rarely carried a mint mark; some of the other mints also sometimes produced coins without mint marks, but this was not a common practice. Collectors need to learn about mint marks, because they can make a big difference in a coin's value.
7. Most people begin by collecting whatever coins come their way. Eventually, however, you decide to collect a particular series of coins, such as Lincoln cents, and attempt to acquire a complete set of these coins, comprising every known date and mint. It soon becomes evident that some coins in the series are much more difficult to obtain than others, and command very high prices. What are these hard to find and valuable coins called?

Most coin series have at least one "key" coin. In the case of Lincoln cents, there are two: the 1909-S V.D.B. and the 1914-D. In 1909, the first year of issue, the initials of the coin's designer, Victor D Brenner, were prominently displayed on the coin.

This was not popular, and the initials were soon removed. The Philadephia mint struck millions of the coins bearing the initials, but in San Francisco, only 484,000 specimens were made before the initials were removed. In 1914, the Denver mint produced only 1,193,000 cents.

In most grades, these two coins are the most valuable of the series. It should be noted that a low mintage does not necessarily mean that a coin is a "key." In 1931, the San Francisco mint produced only 866,000 Lincoln cents, but a 1931-S is worth only a fraction of a 1914-D, because almost all were saved by collectors.

In addition to "key" coins, there are other dates and mint marks that are scarce, but not quite as valuable as the "keys." These are known as semi-keys. Semi-key Lincoln cents include the 1909-S (without the V.D.B. initials), the 1924-D, and aforementioned 1931-S.
8. Did the United States ever produce a three cent coin?

The United States not only produced three cent coins - it made two types of them! The first was a silver coin that was produced from 1851 through 1873. From 1851 through 1853, it was struck in .750 fine silver, but in 1854, the fineness was increased to .900. These are among the smallest U.S, coins ever issued, being only 14mm in diameter, and weighing less than one gram. They were often refered to as "fishscales" due to their small size and weight.

From 1865 through 1889, nickel three cent coins were also produced. The actual composition was 75% copper and 25% nickel.

O. Henry's famous short story, "The Gift of the Magi," begins: "One dollar and eighty-seven cents. And sixty cents of it was in pennies." Most people think this is a mistake on O. Henry's part, because there is no way to make up a sum of $1.27 using current non-penny coin denominations. But when the story was written, in 1906, three cent coins were still in circulation, so it really isn't a mistake at all.
9. Sometimes the mint will issue special coins to honor an event or an individual. These are called commemorative coins. When did the United States produce its first commemorative coins?

The first U.S. commemorative coins were produced in 1892 in honor of Columbian Exposition in Chicago. 950,000 of the coins were minted in 1892, and an additional 4,052,105 in 1893. They were for sale at the price of $1, but found few takers at double the face value. Only 400,000 were sold at the Exposition. The rest were melted down or released into circulation. They are not rare coins, and sell for little more than their silver content in lower grades. In contrast to the half dollars, the "Isabella Quarter" is a scarce coin. Minted in 1893, also for the Columbian Exposition, it had a total mintage of just over 40,000. It sold, like the half dollars, for the then princely sum of $1. Almost half of the quarters were returned to the Treasury and melted down. A nice circulated example sells for several hundred dollars and uncirculated specimens in pristine condition fetch thousands.

Not all commemoratives are rare. In 1976, the designs of the quarter, half dollar, and one dollar coins were changed to commemorate the bicentennial of American independence. You can still find the quarters from time to time in your pocket change.
10. The mint isn't perfect. Once in a while it makes mistakes when producing coins, and although it catches most of them, some do make it into circulation. What do collectors call these mistakes?

There are many types of error coins. A coin may be struck off-center; it may be struck twice; or it may be struck on the wrong blank, or planchet. Not all error coins are valuable, but some are. For example, the Philadelphia mint did not produce any cents in 1922, but the Denver mint did. On some of the Denver coins, die wear caused the "D" mint mark to disappear, making the coin appear as though it came from Philadelphia, which did not use a mint mark at that time. These 1922 "plain" cents are rare and valuable. Other valuable errors have resulted when the mint has re-engraved the date on a coin die and changed the year; these "overdates" often bring high prices, as in the 1918 over 17 Buffalo nickel, and the 1942 over 41 Mercury dime.

Investing in error coins is very risky. Often they do not hold their value over time. The 50 State Quarters program included many small errors, which were sold for a great deal of money at the time, but after only a few years interest has faded, and most now command a very modest premium. Collecting error coins is a fun part of the hobby, however. All you need is a magnifying glass, and you can discover interesting (and potentially valuable) coins in your pocket change.
Source: Author daver852

This quiz was reviewed by FunTrivia editor WesleyCrusher before going online.
Any errors found in FunTrivia content are routinely corrected through our feedback system.
Most Recent Scores
Dec 20 2022 : Guest 166: 10/10
Dec 14 2022 : misterpants: 10/10 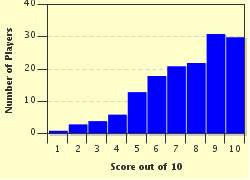