We all use this everyday. You probably have some in your pocket right now. But have you ever REALLY looked at it?

Quiz Answer Key and Fun Facts
1. What is on the back of the one dollar bill?

Thomas Jefferson was the third President of the United States. TJ was the author of the Declaration of Independence.
3. The Lincoln Memorial is on the back of the five dollar bill.

The Lincoln Memorial is also on the reverse of the United States one cent coin.
4. Who is on the front and what is on the back of the ten dollar bill?


Answer: Hamilton and The U.S. Treasury

Hamilton is one of two non-presidents featured on currently issued U.S. bills. The other is Benjamin Franklin, on the $100 bill.
5. Who is on the front of the twenty dollar bill?

Grant was very famous and the leading Union general in the American Civil War. He accepted the surrender of Robert E. Lee, his Confederate opponent, at Appomattox Court House.
7. We all know that Franklin is on the front of the one hundred dollar bill, what is on the back?

Independence Hall is one of the most recognizable U.S. national landmarks, located in Philadelphia, Pennsylvania.
8. Which four current bills have the pictures of former U.S. generals?


Answer: The one, ten, twenty and the fifty dollar bill


Answer: The Signing of the Declaration of Independence

The Declaration of Independence painting by John Trumbull is featured on the reverse of the two dollar bill.
10. Has the U.S. ever had a five hundred dollar bill in circulation?

The five hundred dollar bill was taken out of circulation in 1969.
Source: Author blrennels 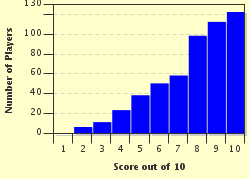 Related Quizzes
1. Classic American Coins: Large Cents Tough
2. Classic American Coins: Nickels (Five Cents) Tough
3. Trade Me In (If You Can) Average
4. The U. S. One Cent Coin Average
5. A Penny for Your Thoughts? Tough
6. So You Want To Be a Coin Collector Average
7. Odd and Curious U.S. Money Average
8. American Numismatics Average
9. Where's George (WG) Average
10. American Coin Collecting for Beginners Easier
11. The U. S. Nickel Average
12. I Once Had Twenty-Five Quarters Difficult


Other Destinations
Explore Other Quizzes by blrennels