A Penny for Your Thoughts? Trivia Quiz

This quiz covers the history of the one-cent coin, more informally known as the penny.

Quiz Answer Key and Fun Facts
1. If a layman were shown an early one-cent coin, he/she would not immediately recognize it as a penny. Why is that?


Answer: Early one-cent coins were much larger than current pennies.

The diameter was one and a half times larger (29 mm compared to 19 mm) and the large cent weighed 3 times as much as the current penny.

The large cent was produced until 1857, but rising copper prices made the mint decide to switch to the small cent, and pennies have had the same diameter since (though the thickness and metal content have changed).
2. Speaking of early one-cent coins, when was the first one-cent coin officially minted in the US?

The 1793 Flowing Hair large cent was the first cent ever officially minted by the US Mint. There were two different reverses minted: the chain reverse and the wreath reverse. In each, the words "ONE CENT" were surrounded by a loop of chain links or a laurel wreath, respectively.

The chain cents are far more rare than the wreath cents; however, there is one type of wreath cent where only four specimens are know to exist - the Strawberry Leaf Variety. This variation features a sprig of a strawberry plant located on the obverse under the bust. Recently (January 09), one of these was sold at an auction in Fine-12 condition for a whopping $862,500!
3. The Flying Eagle Cent is the only US Coin to feature an eagle on the obverse (the front).

The Flying Eagle cent was unfortunately a short-lived coin. They were produced for only three years, and released for general circulation for only two (1857 & 1858). The 1856 Flying Eagle is exceedingly rare and fetches high prices - between $7,000 and $22,000 depending on condition.
4. The Flying Eagle Cents and the early Indian Head Cents (through 1864) were different from all other pennies subsequently produced. Which is NOT one of those differences?


Answer: They lacked the phrase "IN GOD WE TRUST".

They did lack the phrase "IN GOD WE TRUST", though this particular characteristic was not unique to these pennies. This phrase was not put on the penny until the Lincoln cent. The other two characteristics, though, were unique to these cents. The alloy used was 88% copper and 12% nickel, and gave the coins a lighter color than many of the other pennies minted in that time (which were mostly copper).

These pennies were actually called nickels for a while, but then the government started making nickel five cent coins and these cupronickel cents became know as 'white cents' These pennies were also almost twice as thick as other cents minted 1864 and after.
5. The 1877 Indian Head Cent is the most sought-after coin in this set. Why is that?


Answer: The mintage number was very low and not that many were saved by collectors of that time.

The mintage number of the 1877 cent was only 852,500. That may seem like a lot, but most pennies minted in that time period had mintage numbers of between 5 and 40 million. When it was minted, this coin did not seem especially remarkable, and most people made no effort to save and preserve these coins. (An 1877 Indian Head Cent in mint condition sells for almost $5,000.) They did not make the same mistake with the 1909-S Indian Head cent, which had a mintage number of only 309,000. Because many of these cents were saved and preserved by collectors, you can buy a 1909-S cent for half as much as an 1877 cent, even though the mintage number is significantly smaller.

This is similar to what happened with the 2009 Nickel. The US Mint decided to halt production of the nickel, having minted only 79 million of them (compared to 624 million the year before, 1.2 billion two years before, and 1.5 billion in 2006). Collectors and non-collectors alike are saving mint state 2009 nickels in anticipation of their future scarcity.
6. Who designed the beautiful Indian Head Cents?

The 1859 Indian Head Cent has a slightly different reverse design than the rest of the set. It has a laurel wreath completely encircling the words "ONE CENT", just like the Flying Eagle cent does. In 1860, however, the design was changed to an oak wreath mostly encircling the words "ONE CENT", the major difference being the presence of a shield at the top of the reverse of the coin.

In 1864, when the mint changed the metal alloy with which the cents were produced, the obverse design was altered slightly. The features were made sharper (including the addition of a 'pointed bust'), and Longacre added his initial "L" to Lady Liberty's ribbon, where it remained until the Indian Head Cents were discontinued in 1909. This L is very difficult to see unless the coin is in excellent condition, and even then, you will probably need a magnifying glass.

Charles E. Barber was the designer of the Barber dime, quarter, and half, as well as the Liberty "V" Nickel.

Victor D. Brenner designed the Lincoln Wheat Cent, though he was never the Chief Engraver for the Mint.
7. What was the primary metal in the cents made in 1943?

Because copper was needed for the war, the US decided to make the cents out of zinc-coated steel in 1943. In 1944, the demand for copper had lessened, and many bullet casings were melted to provide the metal used to produce the cents for the next few years. So if you find a penny from between 1944 and 1946, you might be holding a former bullet casing.

These are ridiculously rare and valuable.
8. When did the Lincoln Cent change from the Wheat reverse to the Lincoln Memorial reverse?

The Lincoln Memorial reverse was designed by Frank Gasparro, who would not become chief engraver until 1965. The new reverse was to commemorate the sesquicentennial (150 years) of Lincoln's birth. If the coin is in excellent condition and you have sharp eyes, you can actually see the statue of Lincoln sitting in the center of the Memorial. Gasparro also designed the Susan B. Anthony dollar, the Eisenhower dollar (except the bicentennial reverse), and the reverse to the Kennedy Half.

As for the other choices, 1943 was when they produced steel cents (as we just saw), 1982 was when the mint switched from a copper to a zinc alloy, and 1969 has no special significance in terms of Lincoln pennies.
9. Do the pennies minted today contain any copper?

The pennies today are copper-plated zinc, giving them a composition of about 97.5% zinc and 2.5% copper. If they were still made of mostly copper (like they were in pre-1982), the value of the copper metal in the penny would be worth 2.4 cents, more than twice the value of the penny (as of 2009). Ironically, this has created problems for the nickel which, composed of 75% copper and only 25% nickel, has a bullion value of around $0.06, making the metal in the nickel more valuable than the nickel itself. Because some people were beginning to melt large quantities of nickels for the metal content, the government criminalized this activity and made it punishable by up to a $10,000 fine and 5 years in prison. (Source: Wikipedia)
10. What is special about the pennies minted in 2009?

These coins are created to depict the bicentennial of Lincoln's birth. Throughout the year there will be four different coins minted, each with a different reverse. The four depictions are of his birth and early childhood, formative years, professional life, and presidency.

In 2010, the obverse will remain the same, but the reverse will be changed to a currently undetermined design that will commemorate Lincoln's preservation of the Union.

Thanks for playing my quiz. I hope you did well, but even if you didn't I hope you enjoyed reading the interesting info. Check out some of my other quizzes and be sure to rate!
Source: Author redsoxfan325

This quiz was reviewed by FunTrivia editor Bruyere before going online.
Any errors found in FunTrivia content are routinely corrected through our feedback system.
Most Recent Scores
Feb 02 2023 : bernie73: 9/10
Dec 09 2022 : Guest 184: 5/10 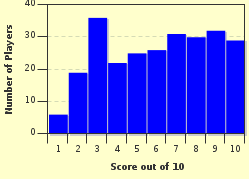 
Other Destinations
Explore Other Quizzes by redsoxfan325