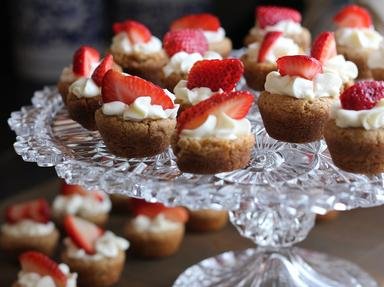 Do you know a Croquembouche from a Baumkuchen? Test your knowledge of these cakes from around the world.

Quiz Answer Key and Fun Facts
1. Which sponge cake is named after a city in Italy?

Génoise is an Italian sponge cake named after the northern city of Genoa. The basic recipe is very simple: butter, sugar, eggs, flour, baking flour and vanilla to taste. Once baked, the cake must be turned into a work of art by adding layers similar in style to a gateau by filling with fruit, cream and chocolate mousse to name a few.
2. Which Sicilian cake comes from the latin word for buccella or "mouthful"?

This is a ring shaped cake from the Mediterranean island of Sicily. It is usually presented to the god child by its godparent on the day of his or her christening. The word "buccellato" comes from the Latin word for buccella, which means "mouthful". The cake is made from a pastry dough and plenty of other ingredients are added to give it texture and flavour.

These include chocolate, rum and spices as well as dried fruit and nuts.
3. Which of these tortes was named after a Hungarian Prince?

The Esterhazy torte is named after Paul Anton Esterházy, a Hungarian prince who lived from 1786 to 1866. There are many different varieties and methods of making the cake. Some recipes call for a sponge cake mixture to be made, but a traditional recipe uses almond meringue, layered with chocolate butter cream and fondant icing on top to decorate.
4. Which French cake's name literally means "thousand sheets" in English?

This very simple cake from France has become popular throughout the world. The word mille-feuille means 'stacked', made up with a whipped cream filling. The top is then iced with white fondant and raspberry jam, or chocolate, piped thinly in a herringbone design.
5. The Swedish cake Kladdkaka is delicious. In what condition should the centre be when removed from the oven?

The Kladdkaka cake from Sweden has been described as a moist chocolate sticky cake with a gooey centre. It is normally served with fresh cream or ice cream. The ingredients include eggs, sugar, flour, salt, butter, cocoa and vanilla. The cake should be removed from the oven when the edges are crisp but the centre isstill gooey.
6. The traditional Viennese cake, Sachertorte, was created by whom?

You may think to pronounce this word would sound like "s-a-sh-er-t-or-t" but it sounds more like "z-a-k-er-t-or-t-or". The cake was first introduced to us in 1832 from the city of Vienna, Austria by confectioner, Franz Sacher. Two chocolate sponge cakes are layered together with apricot jam and a dark chocolate icing is covered over the sides and top. Serve with cream.
7. Which English cake is pink, yellow and covered with marzipan?

The cake is believed to have been created in 1884 to celebrate the marriage of Queen Victoria's grand daughter, Princess Victoria of Hesse-Darmstadt, to Prince Louis of Battenberg. The cake is made into four square-sectioned sponges in a pink and yellow checker pattern. This is then layered together with apricot jam and covered with marzipan.
8. American inventor H. David Dalquist patented the design for which cake tin?

It is thought that the Bundt cake originally came from Germany where a similar ring shaped cake was called the "Gugelhupf". American inventor H. David Dalquist patented the design for the aluminium pan that makes its shape so distinctive. The basic recipe includes sugar, butter, eggs, milk, vanilla extract and flour. Different flavoured glazes and drizzles can be added afterwards.
9. Which of the following is an Italian loaf cake, especially popular at Christmas?

Panettone is a traditional Christmas loaf or fruitcake from the Milan region of Italy. It takes a long time to make as the dough base has to be proofed at least three times over a number of hours so that it retains a light texture after cooking. Candied fruit and raisins are added to the dough mixture to give it flavour. It is then baked in a distinctive tubular mould to give it height.
10. Which dessert cake originated from Dax in the south west of France?

The French certainly have a wonderful array of cakes and desserts and the delicate Dacquoise is no different. The word comes from the French word meaning "Dax" which is a town in the south west of France. The traditional Dacquoise has two layers of hazelnut and almond meringue, filled with butter cream, fresh cream or chocolate ganache.
Source: Author Plodd 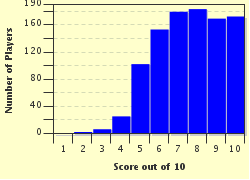 Related Quizzes
1. This Quiz Really Takes the Cake Average
2. Who Wants Creme Brulee? Easier
3. A Cat Cast Acts as a Casatta Average
4. The Truth Is In the Pudding Easier
5. A Sweet Cart Named Desire Average
6. My Favorite Desserts Average
7. Mmmmm... Cheesecake! Average
8. Keep the Best for Last Easier
9. The Pie Who Bugged Me Average
10. Too Much and Never Enough Average
11. I Dare You to Pare a Pear Average
12. Dietary Indiscretions Average