What am I making? Trivia Quiz

I'm hungry and I'm a cooking wizard. I think I'll invent some dishes that have already been invented.

Quiz Answer Key and Fun Facts
1. I'll make some dough, roll it into a thin sheet, and place it in a pan and bake it til it gets a little crispy. I'll make some lemon pudding and pour it into the pan on top of the dough. While that cools, I'll separate a half dozen egg whites from the yolks, add some sugar to the whites, and whip the mixture into a fluff and put it on top. What did I just make?

Lemon flavored custards, and puddings have been around since Medieval times. Lemon meringue pie, as it is known today, is a 19th-century product. The earliest recipe was attributed to Swiss baker named Alexander Frehse.
2. I'll take a pound or two of ground beef, put it in a large bowl, throw in some crushed crackers, onion, diced green pepper, salt, pepper, and an egg. I'll knead it all together and then shape it in the form of a brick and bake it for an hour to an hour and a half. When it's done, I'll pour some kind of red sauce all over it. What did I just make?

Meat loaf has been a staple dinner in most American households for years. It can be made with, beef, pork, chicken, or any combination of meats. Everyone who makes it usually adds their own special spice or touch to make it their own. It can be served with red sauce, brown gravy, or just by itself.
3. I'll take two pieces of bread and place a slice of cheese between them, butter the outsides of the bread and place the whole thing in a frying pan. I'll wait till one side gets toasty brown, flip it over, and then get the other side toasty brown. Hopefully the cheese will have melted nicely. What did I just make?

Grilled Cheese Sandwich is one of the easiest quick foods to make. It goes well with any type of soup, or is just fine on its own. Some people like to add bacon to give it a kick.
4. I'll take a piece of beef, chop it into cubes and throw it in a pot of water, and boil it. I'll toss in a couple table spoons of beef bouillon and some chopped onions, cubed potatoes, chopped carrots, and chopped celery. I'll let it all boil together and thicken up. What did I make?

The recipes for stew are endless. Stew can be made with any type of meat and any type of vegetables. Stews have been made since the 4th century B.C.
5. I'll take some chicken and slice it into thin slices and fry it with some onion, garlic, and a little oregano. Then I'll take the chicken out of the pan and add some cream and butter to the pan, add Parmesan cheese, and stir it till it thickens. Then I'll toss the chicken back in the sauce. I'll boil up some fettuccine pasta and mix everything together. What did I just make?

One of the oldest and simplest Alfredo sauces is made with melted butter and melted Parmesan cheese. It was first mentioned in the 15th-century cookbook, "Libro de arte coquinaria", by Martino da Comosan.
6. I'll take a few potatoes, peel them, and grate them into a bowl. I'll toss in a couple eggs, chopped onion, and a couple tablespoons of flour. I'll heat up a frying pan, use a ladle to scoop out the some of the mix, and pour three or four round flat discs and fry them til they brown. What did I just make?

Potato Pancakes is another food with various recipes. Jewish people have a variation that is called Potato Latke that uses Motzo meal in the mix. Some people leave out the onion and roll the pancake up with jelly or jam. Potato Pancakes can also be made with mashed potatoes.
7. I'll take a couple eggs, crack them and put them in a bowl, add a little milk and whisk it together. I'll dip some bread into the batter and then lay the bread on a griddle til both sides get golden brown. I might even sprinkle on a little cinnamon. What did I just make?

French Toast is another simple breakfast item. It has many names such as: Bombay toast, Egg toast, German toast, or Spanish toast. All are made by dipping bread in egg batter.
8. I'll take six eggs and hard boil them. When they cool, I'll peel them and cut them in half, take a spoon and scoop the hard yolks out into a bowl. I'll mix in some diced onion, mustard, mayonnaise, and maybe a little pickle relish. I'll take that mix and spoon it into each empty egg white and then sprinkle a little paprika on top. What did I just make?

Deviled Eggs are usually served as a cold appetizer at parties and on holidays. A wide variety of spices, meats, seafood, and vegetables can be added to the recipe to make them unique.
9. I'll boil up some long broad flat pasta with curly edges. When they soften up, I'll lay four strips in the bottom of a casserole pan and put a layer of ricotta cheese, sausage, Italian red sauce, Parmesan cheese, and cover it all with four more strips of the pasta. When it's done, I'll cover it with mozzarella cheese and put it in the broiler til it melts and browns a little. What did I just make?

Lasagna was invented in the middle ages in the city of Naples. It is a dish that can be made with any type of meat, or no meat at all. It can be made one, two, or three layers high.
10. I'll take a whole chicken and put it in a pot of boiling water, add some chicken bouillon, chopped carrots and celery, bay leaf, and allspice. When the chicken is fully cooked, I'll take it out of the pot and cut into small pieces and put it back in the pot and add some cooked egg noodles. What did I just make?

Chicken soup is one of the oldest and most eaten soup in the world. All countries, if chickens are available, have some form of chicken soup. It is considered a comfort food and has a reputation for being a remedy for colds and the flu.
Source: Author bigjohnsludge 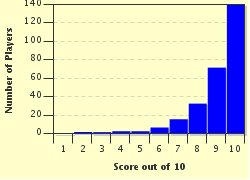 Related Quizzes
This quiz is part of series Bigjohnsludge's odds and ends IV:


1. Were You Alive in 1975? (U.S.) Easier
2. What am I making? Easier
3. Christmas Songs In Other Words Easier
4. Movie Celebrity Mash Easier
5. Sports and Games Terminology Easier
6. School Yard Recess Easier