10 Questions about Into the Woods | Humanities

"Into the Woods" is a fantastic musical about classic fairy tale characters and the original story of a Baker and his Wife.

Quiz Answer Key and Fun Facts
1. What is NOT an object that Jack steals from the giant?

Jack first steals the gold because he and his mother are so poor. Later, he becomes greedy and steals a hen that lays golden eggs as well. Later, Little Red tells him that he is too scared to steal the beautiful golden harp, so he steals that too to prove her wrong.
2. How many people are eaten by the wolf?

After their first wish is granted in the first act, the Baker and his Wife want more room to raise their child. The Baker's Wife wants to simply move to another house, but the Baker is determined to raise his child in the house in which he was raised.
4. Who doesn't die?

After a second act filled with death, Cinderella, Jack, Little Red, and the Baker are the only characters left living. The Baker's Wife, Rapunzel, and the Narrator are all killed by the giant. Jack's Mother is struck a deadly blow by the steward.
5. What is the name of Little Red's solo?

This very funny song shows Little Red's innocent self at the beginning of the play with lyrics such as, "But he seemed so nice." At the end of the song, however, she begins to be a little more sarcastic and her real personality starts to shine through.
6. What happens to Cinderella's stepsisters at Cinderella's wedding?


Answer: they are blinded by pigeons

During Cinderella's wedding, pigeons swoop down on Lucinda and Florinda and blind them. Their toes were cut off before the wedding while trying to fit their feet into the slipper as pure as gold.
7. Why is Cinderella crying when the Baker encounters her in the woods?


Answer: her mother's grave was destroyed

The Baker is walking through the woods looking for Jack when he comes across Cinderella. She is weeping at the site of what used to be a beautiful tree where her mother's spirit lived. But the tree and her mother's grave was destroyed, and Cinderella was overcome with grief.
8. Finish the lyric: "I sort of hate to ask it but do you have a ______"

Little Red sings this to the Baker and his wife at the beginning of the show. She has been stealing cookies and sweets and her arms are becoming too full for her to carry them all.
9. Who won the Tony Award for Best Actress in a Musical?

Many people went to see "Into the Woods" because the very talented Bernadette Peters was starring as the Witch. To everyone's surprise, however, it was Joanna Gleason as the Baker's Wife who stole the show and snagged the Tony. She was a fantastic actress and if you haven't seen her in the recording of the show, I suggest you do so. The other actors are fantastic as well.
10. The Narrator concludes the show with, "and they all lived happily ever after."

Actually, after a huge closing number with the full cast, Cinderella comes out with the last line, "I wish!" This shows that people are never satisfied and always have more wishes, even if they should be content.
Source: Author golferchicks 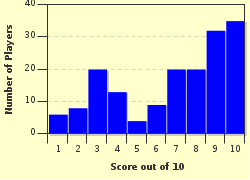 
Other Destinations
Explore Other Quizzes by golferchicks

More Into The Woods Quizzes