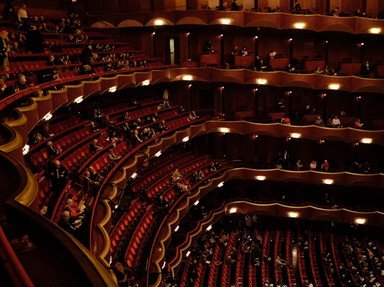 The 2005 revival of Stephen Sondheim's musical thriller "Sweeney Todd: The Demon Barber of Fleet Street" starred Michael Cerveris in the title role. What do you know about this particular production?

Share on Facebook
Share on Twitter
Share by E-Mail
Author
anthonyrappfan
Time
4 mins
Type
Multiple Choice
Quiz #
224,365
Updated
Dec 03 21
# Qns
15
Difficulty
Average
Avg Score
9 / 15
Plays
612
This quiz has 2 formats: you can play it as a or as shown below.
Scroll down to the bottom for the answer key.

Quiz Answer Key and Fun Facts
1. What is unique about the actors in the show?

All the actors double as the orchestra. For example, the original Jonas Fogg also played bass, and the original Mrs. Lovett played the tuba, among other instruments.
2. Who originated the role of Judge Turpin in the 2005 revival?

Michael Cerveris and Alexander Gemignani were members of the original cast, and Edmund Lyndeck played the role in the original production in the 1970's.

Mark Jacoby has also appeared in "Ragtime" and "Man of La Mancha".
3. Which cast member has also released his solo debut album?

Michael Cerveris' "Dog-Eared" hasn't garnered much press coverage, although it's not getting panned either.
4. What is different about the role of Pirelli from previous productions?

John Doyle has directed over 200 plays in his native England, but "Sweeney Todd" marked his directing debut on Broadway.
6. At which theatre did the revival play?

Other shows that have played at the theatre include "Death of a Salesman", "Grease", and "Nine". It was christened the Eugene O'Neil Theatre in 1959.
7. Not counting the understudies, how many people in the cast made their Broadway debut with the 2005 revival of "Sweeney Todd"?

Lauren Molina, Benjamin Magnusson and Diana DiMarzio are all making their Broadway debuts with the revival production of "Sweeney Todd". Lauren Molina, we're assuming, is no relation to Alfred Molina. Champlin played Honoria Glossop, one of Bertie's would-be suitors. I hope you "Jeeves" fans noticed Hugh Laurie as an incorrect choice; he played Wooster on the television series that ran from 1990 to 1993.
8. Which cast member was also in "By Jeeves"?

"By Jeeves" is a musical by Andrew Lloyd Webber and Alan Ayckbourn based on the stories featuring the bumbling Bertie Wooster and his tolerant butler, Jeeves.
9. What is Sweeney's relation to Johanna?

Although neither of them know it, Johanna is the daughter of Sweeney's late wife, Lucy.
10. Which description best fits the reviews the revival received?

With few exceptions, the revival production has garnered acclaim from critics from the "New York Times", "Rolling Stone" and various other sources.
11. Which cast member was nominated for a Tony for his/her role in "Show Boat"?

Mark Jacoby played Gaylord Ravenal in the production, which also featured John McMartin and Elaine Stritch. Jacoby sang "You Are Love" and "Where is the Mate for Me?".
12. Complete this song title: "City on _________"

"City on Fire" is a lengthy song involving all the characters towards the end of the second act.
13. Diana DiMarzio originated the role of the Beggar Woman in the revival production. What instrument did she play?

All too late, Sweeney discovers that the Beggar Woman who annoys Londoners with her constant sexual comments is actually his lost love, Lucy.
14. Patti LuPone had previously appeared as Mrs. Lovett prior to the revival.

Patti LuPone debuted as Mrs. Lovett in a 2000 concert that was aired on PBS. This, however, marks her Broadway debut in the role.
15. When appearing as Sweeney in the original production, Len Cariou sported a full head of hair. As Sweeney in the revival, how did Michael Cerveris wear his hair?


Answer: He was bald


Other Destinations
Explore Other Quizzes by anthonyrappfan