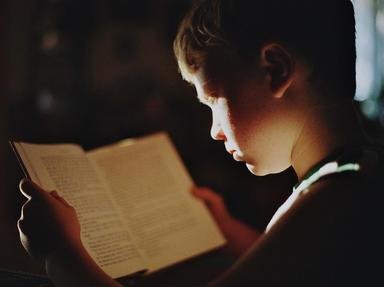 Tempest in a Teapot Trivia Quiz

Match the characters who took tea together in the course of their stories. Not every teatime was tempestuous, nor even traditional, but some of them certainly were.

Noddy is the hero of a series of books for smaller children, written by Enid Blyton. Big Ears is a gnome-like brownie, who is Noddy's friend and something of a mentor. In "Noddy Goes to Toyland" they have tea with neighbours, Mrs Tubby Bear and her son, which from the illustration appears to include a selection of cakes and biscuits (cookies) as well as hot sweet tea. Well, the sugar bowl on the table leads one to believe the tea might be sweet!
2. Jane and her charge, Adele

Jane Eyre, eponymous heroine of Charlotte Bronte's novel, is governess to a little girl of French origin named Adele, who is the ward of Mr Edward Rochester, owner of Thornfield Hall and Jane's employer, who is often absent. Rochester arrives at the Hall, having been unknowingly assisted by Jane after falling from his horse.

He requests that both Jane and Adele join him for tea the next day. He alternates between being quite stand-offish, and showing interest in Jane's drawings. The relationship that develops between Jane and Rochester goes through some tempestuous periods, before its eventual conclusion is reached.
3. Alice

The 'Mad Tea Party' as described in the chapter of that title, in Lewis Carroll's "Alice's Adventures in Wonderland", is probably one of the most famous literary tea times. It is chaotic, if not actually tempestuous, with the Alice bemused at the Hatter's offer of 'more' before she has had 'any', the March Hare's input and the poor sleepy dormouse ending up with its head in the teapot! The Hatter, mad or not, is condemned to perpetually take tea to escape the death sentence pronounced upon him by the Red Queen.
4. Thomas Beresford

Better known as Tommy and Tuppence Beresford, these two are not yet married when they take tea together in a Lyons Tea Shop near the beginning of Agatha Christie's "The Secret Adversary". It is here that they decide to become 'young adventurers', and to seek out a means of making money that is not monotonous.

They marry at the end of this book's adventures, and their life together is explored in four books that follow.
5. David Copperfield

In the 28th chapter of Charles Dickens' "David Copperfield", Mr and Mrs Wilkins Micawber have tea with Copperfield and his friend, Tommy Traddles, who lodges with the Micawbers. Conversation includes some discussion of Copperfield's young lady, Dora, and Mrs Micawber entertains the group with a few songs.

Some cautionary words from David to Traddles come too late to save the latter from financial problems.
6. Elfride Swancourt

Early in Thomas Hardy's "A Pair of Blue Eyes", Smith arrives at the vicarage home of Elfride and her father, where the younger man will stay whilst assessing the restoration work that needs to be carried out on the reverend Swancourt's church. When Smith arrives, the clergyman is laid up with gout, so Elfride provides high tea for the weary traveller. During this encounter they each form favourable impressions of the other.
7. Mr Chipping

"Goodbye Mr Chips" is James Hilton's tale of the once stuffy schoolmaster, Mr Chipping, who transforms into Chips after his marriage to a younger woman who encourages him to have students at Brookfield School to take tea with them. Even after her early death, Chips continues to entertain new boys to tea, to make them welcome and at their ease.
8. Precious Ramotswe

Precious Ramotswe is the proprietor of "The No. 1 Ladies' Detective Agency" as described in the series that begins with that title, by Alexander McCall Smith. She and her assistant, Grace Makutsi, operate in Botswana, taking on cases that are of interest to them. During the course of their investigations, they drink copious amounts of rooibos (redbush) tea, which seems central to their work process.

The tenth book in the series is "Tea Time for the Traditionally Built", a description Precious has for herself.
9. Basil Hallward

In Oscar Wilde's "The Picture of Dorian Gray", the third person drinking tea this time is none other than Gray himself. There is some discussion of going to the theatre, and the tiresomeness of getting dressed in formal attire to do so. The talk turns to the picture of Gray that Hallward is painting, who shall own it and whether it or the young man is the 'real' Dorian. Later events will recall this discussion, and leave the reader to decide.
10. Lady Bracknell

Wilde again, from his play "The Importance of Being Earnest", with the third party at tea this time being Jack Worthing, who is known as Ernest to Gwendolen, Lady Bracknell's daughter, who is also taking tea with them. Jack wants to propose to Gwendolen, which is why he is calling himself Ernest, to satisfy her whim of marrying a man of that name. Lady Bracknell doesn't approve, and the action moves to a new location.
Source: Author spanishliz

Related Quizzes
This quiz is part of series Fun With Commissions 2:

Forty seemed like enough for the first list, so this list will commence with my quiz, and the one made from my suggested title, for Commission 49 and continue from there.


1. Masterpiece of Engineering Average
2. It's So Fascinating! Average
3. Good Old Benedict Average
4. No Worries Average
5. Tempest in a Teapot Average
6. At the End of the Rainbow Very Easy
7. Fusion or Fission Average
8. Friend or Foe Very Easy