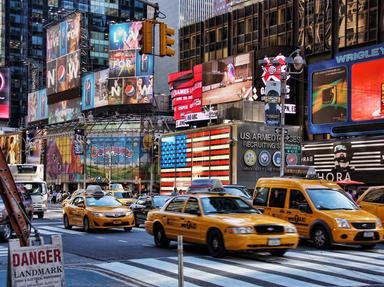 'Let Me Entertain You!' Trivia Quiz

From 'Singing in the Rain' to 'Mamma Mia!', from 'The Music Man' to 'West Side Story', musicals have always entertained me. How about you?

Quiz Answer Key and Fun Facts
1. My favorite Martian, why are you wearing a grass skirt and trying to cheat Bloody Mary in the 1958 musical 'South Pacific'? Just who do you think you are?

Playing the scheming, wheeling-dealing Luther Billis, Ray Walston should have known better than to try to cheat Bloody Mary. After all, 'There is Nothing Like a Dame'. This Rodgers and Hammerstein musical, set in the South Pacific and filmed mainly in Hawaii, is set during World War II and features a romance between an American Navy nurse and an older French planter. Before 'South Pacific', Ray Walston won a Tony award for his Broadway role as the devil in 'Damn Yankees'.
2. Wait a moment! I was here yesterday and I'm sure there wasn't a village here. Oh, there's a road sign. What Scottish town is this?

'Brigadoon', appearing once every hundred years for only a day doesn't seem too far-fetched. After all, 'Anything is Possible'. Starring Gene Kelly, Van Johnson and Cyd Charisse, 'Brigadoon' was adapted from a 1947 Broadway play, and centers on a Scottish village that comes to life for one day every hundred years.
3. 'Oh What a Beautiful Morning', there's corn as high as an elephant's eye, I've got a beautiful feeling - I'm lost. Where am I?

I think it's time to take a ride with Laurey and Curly in 'The Surrey With the Fringe on Top'. After all, 'I Cain't Say No' because 'People Will Say We're in Love'. Set in the early 1900s, 'Oklahoma!', a Rodgers and Hammerstein musical, starred Gordon MacRae, Shirley Jones and Rod Steiger in a song-filled romance of frontier life. But, when jealousy and competing suitors come into the story, romance does not ride smoothly along.
4. Hide the children? From Baron Bomburst or the Toymaker? Which 1968 musical did I stumble into this time?

From 'Perfect Pitch' to 'Toot Sweets', this movie could actually be considered 'Truly Scrumptious'. An imaginative adventure that includes a candy factory, pirates, a flying car and a child-hating baron and baroness, this musical has some rather scary moments. Written by Ian Fleming, with a screenplay by Roald Dahl, 'Chitty Chitty Bang Bang' features the inimitable talent of Dick Van Dyke as the eccentric inventor and father of two, and Benny Hill, who helps to hide the children, as the subversive toymaker.
5. 'I Whistle a Happy Tune' whenever I'm here in what used to be called Siam. But where 'Shall We Dance'?


Answer: The King and I

So here I am in what is now Thailand, 'Getting to Know You' and it's truly 'Something Wonderful'. Based on a true story, in the 1860s Anna Leonowens, along with her young son, arrives at the royal court of the King of Siam as a schoolteacher. Besides falling in love with her young charges, Anna falls in love with the king. Between two very strong personalities, an extremely wide cultural gap, and children who range in age from mere babes to young adults, their romance is tumultuous.
6. What was that? Did he say he was a 'Lonesome Polecat'? Well, 'When You're in Love' there's only one solution. But, just what musical solution is that?

A barnraising? Sounds like a lot of work. 'Bless Yore Beautiful Hide', you're going to have a 'Wonderful Wonderful Day'. And I'll have a new barn. Starring Jane Powell, Howard Keel, Jeff Richards and Russ Tamblyn to name just some of the performers, the story of frontier brothers searching for marital bliss is a rousing acrobatic-feat filled extravaganza.

After the success of the movie, 'Seven Brides for Seven Brothers' became a weekly television show.
7. Of course I speak English, Eliza. After all, it's 1964 and you're 'My Fair Lady'. But 'Wouldn't It Be Loverly' to know your real name?

'Just You Wait', Eliza, because 'On the Street Where You Live' I'd be lost 'Without You'. And as Professor Higgins said, 'I've Grown Accustomed to Her Face'. Professor Higgins, played by Rex Harrison, sets out to turn a Cockney flower seller, Eliza, into a lady, and in the process falls in love with her. Rex Harrison also played Dr. Doolittle in the 1967 movie by the same name, and Audrey Hepburn was in 1961's 'Breakfast at Tiffany's'.
8. Have you met 'Miss Hannigan'? I certainly wouldn't want to be one of her 'Little Girls'. 'Maybe' someone should tell me which musical I'm in now.

There's always 'Tomorrow', but 'I Think I'm Gonna Like it Here'. 'It's a Hard-Knock Life', but there's always my 'Dumb Dog' - and Miss Hannigan. Set during the latter part of the Depression, Carol Burnett, with her bathtub gin and scamp of a brother - Rooster - try to make a few bucks off of Annie's wish for a family. Between Daddy Warbucks and Miss Farrell, Punjab and the rest of the house staff, Annie finds a new family.
9. It's been a long day, but 'Tonight' is still hours away, here in 'America'. And I've heard a rumor that there's going to be a rumble 'Somewhere'. But which two gangs are going to fight?

'Something's Coming' and 'Gee Officer Krupke', I don't think things are going to turn out well. 'Maria', singing 'I Feel Pretty' won't help. The 1961 movie, starring Natalie Wood, Richard Beymer, Russ Tamblyn and Rita Moreno is based on Shakespeare's 'Romeo and Juliet'. Retold as an ill-fated romance in 1950s New York, the movie features the music of Leonard Bernstein and the lyrics of Stephen Sondheim.

Instead of feuding families, the animosity is the result of different cultures.
10. Okay, we're going to have 'Some Fun Now' and visit 'Skid Row'. The nightlife is tame there compared to a certain plant I recently met. Where did I meet Audrey II?

Somehow, I don't think pleading with Audrey II to 'Grow for Me' was a particularily wise move for 'Suddenly Seymour'. Because now it's 'Suppertime' and Audrey II is a 'Mean Green Mother From Outer Space'. When a meteor passes overhead, Seymour's dreams of getting out of Skid Row seem to be coming true. Until the plant that he's named Audrey II shows its true carnivorous self. Starring Rick Moranis and Ellen Greene, the cast also includes Steve Martin, Jim Belushi, John Candy, Bill Murray and Vincent Gardenia.
Source: Author beergirllaura 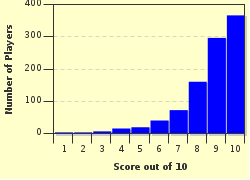