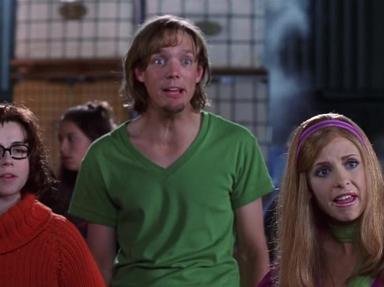 This is about the first part of "Scooby Doo" the movie. If you haven't seen it, this quiz could spoil the movie.

Quiz Answer Key and Fun Facts
1. Who is the director of this movie?

You should definitely watch the interview of Raja Gosnell, he has interesting information about the creation of "Scooby Doo". The interview is available on the DVD. Raja was born on December 9, 1958 in Los Angeles, California. He also directed "Scooby Doo 2: Monsters Unleashed", "Big Momma's House", "Never Been Kissed", and many others.
2. The Luna Ghost has an interesting costume. What two types of costumes make up his one?

I like this costume, a lot actually. The costume itself is creamy white and clown-like, the mask part is like a joker that you would see in a deck of cards. The Luna Ghost is in the beginning of the movie, when he kidnaps Daphne, surprise, surprise. Old Man Smithers is the Luna Ghost.

He 'defies' gravity using helium-filled balloons. He takes on the role of the Luna Ghost because Pamela Anderson won't date him.
3. What is Fred's book called?


Answer: Fred on Fred: The Many Faces of Me

When the gang meets up again at the airport, Fred tells Velma that he was on a book tour. He mentions to her that the book is called "Fred on Fred: The Many Faces of Fred". Also, on the plane he is reading it, and you can see the front of it, including the title.
4. What color are Grandma Scooby's shoes?

When Scooby strides into the airport, all dressed up in old granny clothes, it shows her outfit from top to bottom. Her shoes are yellow, her dress a floral print, and she is wearing a straw hat. Shaggy thinks it is best to disguise him as his grandma, because dogs aren't allowed on the airplane.
5. When the gang arrives at Spooky Island, Daphne dumps her luggage on the ground, declaring that she is glad she doesn't have to carry them all the way to her room. Who actually carries them?


Answer: An attendant for Spooky Island

One of the attendants carries them for her, but if you don't look carefully, you don't notice it. As the gang is walking and talking, you see him in the background, with all seven of her suitcases.
6. When Shaggy and Mary Jane are walking towards the crane machine, what is hooked to the back of her skirt?


Answer: jean, long, split up one side

You can also gather this information as she and Shaggy are walking toward the crane machine. It shows it first from a side angle, then from the back.
8. According to Fred, winning at the crane machine is Shaggy's worthless talent. Instead, he thinks that Shaggy should have learned what?

Shaggy delivers this information to Mary Jane when he shows off this worthless talent.
9. What does the Voodoo ritual guy that Daphne meets use as a sacrifice?

Daphne catches this guy on the beach, in the middle of his ritual. He is in a little hut-like thing. She starts questioning him about the mystery that she is set on solving herself. And she points out the obvious that the chicken is dead.
10. Daphne, Scooby, and Shaggy are standing outside of a spooky house, and Daphne is trying to convince Scooby and Shaggy into going inside. Shaggy tells her that in big spooky houses the eyes in the pictures follow you. She asks, "How many times did that actually happen." What is Shaggy's reply?

This is right after she confuses the voodoo ritual guy with the whole "You know that I know that you know that you don't want me to go in that castle..." deal. In this scene Shaggy and Scooby are trying to give Daphne all the reasons that they can think of not to go into that castle. They mention the eyes following them, ghosts, and such.
Source: Author tinkerbella_00 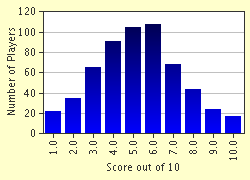 
Other Destinations
Explore Other Quizzes by tinkerbella_00