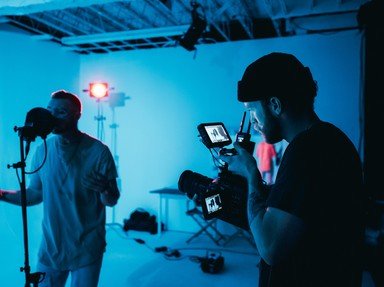 I'll give you clues about the video, you name the video or artist. Most are from MTV in the 80s.

Quiz Answer Key and Fun Facts
1. A motorcyle crashing through a stained glass window - a ring being pushed forcefully onto a woman's finger - sneering, leather-clad singer has white, spiked hair. What's the video?

Billy Idol's breakthrough. He made the transition from punk rocker in the band "Generation X" to an MTV pop star. I saw him in concert back then and had as much fun people watching as watching the show! Lotsa 'punks' with some wild hair and safety pins, etc.
2. Guitar player crashing through the ceiling, landing on the table of a formal dinner - cameo by Milton Berle! Rodents emerging from under an entree dish cover. What's the video?


Answer: Round and Round

Ratt's first video. Milton was related to the bank manager at the time.
3. Probably the first video by Robert Palmer that was played on MTV, fronting a 5 piece band of female models pretending they can play their instruments. What's the video?

The choices are all Palmer tunes. He did one or two more videos with a similar look as "Addicted." I thought they were all kinda boring. Shania Twain mimicked the idea with a video where she sang in front of a band of male models, for "Man, I Feel Like a Woman."
4. One of, if not the first, video aired on MTV by a black artist. What's this video about a paternity suit?

Michael Jackson, of course. "Billie Jean is not my lover..." Regarded as a very progressive and expensive production in its time. The lighting floor blocks, glowing sheets, etc., made for an interesting video, along with Michael's signature dance moves.
5. "Live" concert video. At the end, an actress who later stars on the TV show "Friends" gets on stage and dances with the singer. Who's the SINGER?

This is the "Dancing in the Dark" video. Courteney Cox (what a cutie!) is a member of the audience and gets chosen to join Bruce onstage. This tune was Bruce's reply to those who said he couldn't write a good dance tune. This is just one of several tunes that made the "Born in the USA" album a huge seller. I included "Springstein" as acceptable for the pop-culture challenged.
6. 'Live' David Bowie video with him wearing yellow. Roses are tossed to him from the audience, he turns and tosses them back to a different fan. BARITONE sax solo (pretty uncommon). Which video?

Fun song. I tried in vain to get past bands of mine to learn this one.
7. Fun video featuring a former pro wrestling manager who wears a rubber band around his goatee, bubbles with faces in them, the singer has carrot-red hair and comes home at dawn after all-night partying. What's the video?

Cyndi Lauper. "She's So Unusual" is the title of the album and a good description of her. It sure didn't hurt her promotion.
8. A woman's back painted like a cello - wacky mental hospital residents - the quote, "good heavens Miss Sakamoto, you're beautiful." What's the video?


Answer: She Blinded Me With Science

Thomas Dolby. Quirky song with many creative synthesizer effects, interesting video.
9. The trilogy of videos by this group always included a hot rod car with a special key chain and a trio of pretty ladies. Who is the group?

That lil ole band from Texas. The videos included "Gimme All Your Loving", "Sharp Dressed Man", and "Legs." Cool videos, good looking women, tasty guitar riffs. What else do you need?
10. A fly with the head of the singer on him - the band playing on a bar of soap - the singer and a woman swapping heads. The song is "You Might Think." What's the GROUP?

I believe it won video of the year on MTV for the advanced computer production methods. One of several hit tunes off of their multi-million selling "Heartbeat City" album. Produced by Robert 'Mutt' Lange, who also produced AC-DC's "Back in Black", Def Leppard's "Pyromania," Foreigner's "4", Shania Twain's "Come On Over," and many other hit albums. You think this guy has a magic touch?
11. Singer with short, orange hair - other musician 'playing' a typewriter like a piano - a closeup of a cow's eye, very repetitious lyrics. Who's the artist or band?

"Sweet Dreams are Made of This" by Eurythmics, Annie Lennox and Dave Stewart. Pretty boring song if you asked me. I wonder how popular it would have been if it was more normal looking? Still, they put out some tunes later that I thought were much better.
12. Kids playing the band members when they were back in school - instructor dances on the lunch table - contains spoken line, "I don't FEEL tardy." What's the video?

Van Halen. I thought they did a great job making the kids look like the guys in the band might have looked when they were kids. Good rocking tune too.
13. European quartet playing this song live atop a downtown office building - crowds gathering below - cops eventually shutting the band down. Hugely popular Irish group. What's the video?


Answer: Where the Streets Have No Name

U2. Cool video looks spontaneous. One of my fave U2 songs, and I'm not a huge fan. The Beatles did the same thing (live performance on as rooftop) after they decided to split up. It was the last public performance by the Fab Four.
14. Hard rock group with wild makeup - scary-looking long blond haired lead singer - band is beating up on this 'parent,' played by an actor that was also in the movie "Animal House." What's the BAND?

"We're Not Gonna Take It" is the song. Mark Metcalf was Douglas C. Neidermeyer in "Animal House," and repeated some lines from that movie in the beginning of this video - "You're worthless and weak!" Fun video. During the hearings of the PMRC, who were trying to get offensive albums labeled, they cited this video for its violence. Dee Snider (lead singer) replied that the guy kept getting up again after getting hurt, not much different than your average "Road Runner" cartoon.
15. Computer generated, animated retail appliance workers complaining about the easy life of a rock star 'pretty boy' they see in a music video - cameo vocal by member of The Police. What's the video?


Answer: Money for Nothing

Dire Straits. A breakthrough video for its technology at the time. Sting sings, "I want my MTV." When Weird Al Yankovic did his parody of this video (which played off 'The Beverly Hillbillies') Mark Knofler of Dire Straits said, "You can do it, but I have to play the guitar on the recording."
16. Eggs turning into chickens - dancing vegetables - claymation-style figures - the singer donning a suit of lights and fading into a wall of stars in the dark. Hugely poplular video also won many awards. Huge success for this singer who years earlier performed with the group Genesis. What's the video?

Peter Gabriel. Very interesting to watch. Peter, of course, was the original lead singer for Genesis, and was noted for his very unusual stage props, costumes, and performances.
17. Supermodel prancing around an automobile service station with greasy mechanics around - she later married this 'Piano Man' in real life. What's the video?

Billy Joel. Nice lyrics. Appropriate song for their relationship! Though I heard him say in an interview that he wrote most of the song long before he met Christy Brinkley. Dang, makes you want even more to be a rock star, right?!
18. Black and white checkered decor - singer wearing a big top hat - girl saved from drowning in a cup by doughnut 'life preserver' - based on children's story. What's the name of the SINGER from this Gainesville, Florida band?

Tom Petty and the Heartbreakers. "DON'T COME AROUND HERE NO MORE". Alice in Wonderland theme. Fun video. Dave Stewart of The Eurythmics plays the sitar at the beginning of the song. In concert, Tom opened up this big trunk on stage and took out the top hat as the music for the song started (to great applause, as you can imagine).
19. Blonde singer surrounded by tux-clad men, based on an old Marilyn Monroe movie. At the end, she drives off with a guy in an old beat-up pickup truck. What's the video?

Madonna. In one shot where the guys are holding her horizontally, then lowering her head down, you can see her holding her chest to keep it from falling out of the dress (she commented on this in a later interview).
20. Norwegian pop group with this unique video showed a combination of real-life and hand-drawn action: a woman reads a comic book in a cafe, then gets invited into an adventure by the band's hand-drawn lead singer. Who's the group?

Fun video. "Take On Me" was a very catchy song, but the band turned out to be a one-hit wonder. Click on SEND A COMPLIMENT below, I'd love to get your feedback.
Source: Author saxman4 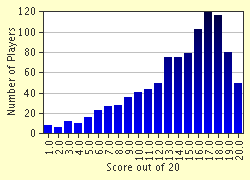