Are you a Beach Boys fan? Test your knowledge of their songs here! I will give you a lyric and you tell me which song it is from. Good luck.

Quiz Answer Key and Fun Facts
1. In which Beach Boys song would you find the following lyrics? "Early in the morning we'll be startin' out Some honeys will be coming along We're loading up our Woody With our boards inside"

"Surfin' Safari" was written by band members Brian Wilson and Mike Love and appears on their 1962 album also called "Surfin' Safari". It got to number 14 in the US charts.
2. "I got a letterman's sweater With a letter in front I got for football and track I'm proud to wear it now" Which song do these lyrics come from?


Answer: Be True to Your School

"Be True to Your School" can be found on the album "Little Deuce Coupe" (1963). It went to number six in the US.
3. In which 1967 song would you find the following lyrics? "Let me tell you how she really got to my soul It ain't funny The way she make me wanna sing a little rock 'n' roll"

"Wild Honey" is from their 1967 album of the same name. It got to number 31 in the US and number 29 in the UK.
4. These are the opening lyrics to which Beach Boys song? "Well since she put me down I've been out doin' in my head Come in late at night and in the mornin' I just lay in bed"

"Help Me, Rhonda" is from The Beach Boys eighth studio album "Today!" (1965). It got to number one in the US and number 27 in the UK. It was written by Brian Wilson and Mike Love and sung by guitarist Al Jardine.
5. "I may not always love you But long as there are stars above you You never need to doubt it" In which Beach Boys song do these lyrics come from?

"God Only Knows" can be found on The Beach Boys album "Pet Sounds" (1966). It got to number 39 in the US and number two in the UK. Rolling Stone magazine placed it at number 30 on their '500 Greatest Songs of All Time' list.
6. In which Beach Boys song do these lyrics appear? "Lovin' you It keeps me satisfied And I can't explain, oh no The way I'm feeling inside"

"I Can Hear Music" was originally sung by the Ronettes who released it in 1966. The Beach Boys did a cover of it and it appeared on the album "20/20" (1969). It went to number 23 in the US and number ten in the UK.
7. These are the opening lines to which Beach Boys song? "I've been in this town so long that back in the city I've been taken for lost and gone And unknown for a long long time"

"Heroes and Villains" can be found on the album "Smiley Smile" (1967). It was written by Brian Wilson and lyricist Van Dyke Parks. It got to number 12 in the US and number eight in the UK.
8. "Well I'm not braggin' babe so don't put me down But I've got the fastest set of wheels in town" Which song do these car themed lyrics come from?

"Sloop John B" can be found on the 1966 album "Pet Sounds". It is based around a traditional west indies folk song "The John B. Sails" and the version "Wreck Of The John B" (1958) by The Kingston Trio. It went to number three in the US and number two in the UK.
10. The following lyrics come from which famous Beach Boys song? "The Mid-West farmer's daughters really make you feel alright And the Northern girls with the way they kiss They keep their boyfriends warm at night"

"California Girls" comes from the Beach Boys album "Summer Days (and Summer Nights!)" (1965). It was written by Brian Wilson and Mike Love. It went to number three in the US and number 26 in the UK.
Source: Author Velvet_Rain 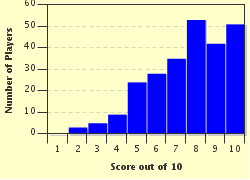 Related Quizzes
This quiz is part of series Lyrics Quizzes:

A selection of lyrics quizzes