In 1999, country music wasn't enough for superstar, Garth Brooks. He decided to attempt a potentially risky dual-crossover into both acting and pop music: He created a grunge-musician character for himself, Chris Gaines.

Share on Facebook
Share on Twitter
Share by E-Mail
Author
shamelesslee2
Time
5 mins
Type
Multiple Choice
Quiz #
131,067
Updated
Dec 03 21
# Qns
10
Difficulty
Tough
Avg Score
5 / 10
Plays
756
This quiz has 2 formats: you can play it as a or as shown below.
Scroll down to the bottom for the answer key.

Quiz Answer Key and Fun Facts
1. In what year was Chris Gaines born?

Chris' parents were Gene and Carolyn Johnns-Gaines.
3. What was Chris' father, Gene's profession?


Answer: Former swim coach for both US and Australian Olympic swim teams

Chris was expected by many to carry the torch in the Olympic waters like his mother once had.
5. What was the name of the band that Chris and two other friends had started in high school defying both his parents' expectations?


Answer: My Love Tells Me So

"My Love Tells Me So" was the second single off the self-titled "Crush" album.
7. What happened to Chris' best friend and band member, Tommy Levitz?


Answer: Died in a plane crash

The death of Tommy Levitz was the end of the short-lived success of the band Crush.
8. What happened to Chris in the winter of 1992 that changed his life forever?


Answer: A violent single-car crash that nearly ended his young and promising life

Chris spent six weeks in the hospital, and over two years undergoing extensive plastic surgery on his face, shoulder, and hands.
9. What was Chris' third album released in the winter of 1994?

After the accident, Chris wouldn't allow himself to be seen or photographed. Even without any artist promotion for "Apostle," the album still managed to spend a combined eight weeks atop the Billboard Top 200 Albums Chart.
10. In 1999, what album did Chris release before his upcoming solo album that the critics already had predicted would be the definitive album of the new millenium?

The Greatest Hits contained songs off of all of Chris' earlier albums along with two new songs, "Lost In You" and "Right Now".
Source: Author shamelesslee2 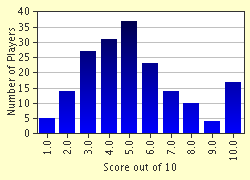 
Other Destinations
Explore Other Quizzes by shamelesslee2