My favorite band! In some cases, I just give you a lyric, and you tell me which song it's from. There are some other general questions near the end. Enjoy!

Quiz Answer Key and Fun Facts
1. 'The factory belches filth into the sky'

From 1983's 'Synchronicity,' The Police's fifth and final album of original material.
2. 'I shake like an incurable...God help me, please'

From 1978's 'Outlandos D'Amour,' their first full album. This song has perhaps the most memorable discordant ending in history.
3. 'How can you say that you're not responsible?'

The opening line of 'Driven To Tears,' from 1980's 'Zenyatta Mondatta.' 'Driven To Tears' leads directly into 'When the World Is Running Down, You Make the Best Of What's Still Around,' which must be one of the longest track titles I've ever seen.
4. 'You stay -- I may as well play'


Answer: 'Walking On the Moon'


Answer: 'Wrapped Around Your Finger'

From 'Synchronicity.' Sting no doubt fell back on his classical education to come up with this reference. Scylla and Charybdis, in Greek mythology, were two monsters who waited on opposite sides of the Strait of Messina (between Italy and Sicily) for ships to pass between them. If savvy sailors somehow avoided being killed by one of the monsters, the other would prove inescapable. Only Jason and the Argonauts ever made it through the Strait safely, and that was only because they had help from one of the Nereids (sea goddesses).
6. 'I strained to understand him...I chased his thoughts like birds'

From 'Outlandos D'Amour.' Figured an easy one was warranted. =)
8. 'I resolved to call her up a thousand times a day'


Answer: 'Every Little Thing She Does Is Magic'

Okay, two easy ones. This one's from 'Ghost In the Machine,' and it's easily one of my favorite Police songs.
9. 'Living on my own was the least of my fears'


Answer: 'The Bed's Too Big Without You'

The opening track of 'Synchronicity.'
11. 'They subjugate the meek...but it's the rhetoric of failure'


Answer: 'Spirits In the Material World'


Answer: his car is warm and dry

A cautionary tale for young teachers from 'Zenyatta Mondatta.' Since Sting spent part of his pre-superstar career being called 'Mr. Sumner' by classrooms full of high school students, one has to wonder if there's an autobiographical slant to this song.
13. The Police's manager was a blood relative of which member of the band?

Miles Copeland III is the brother of drummer extraordinaire Stewart Copeland.
14. When Sting went solo, he included on one of his albums a revamped version of a lesser-known Police song. Which one was it?


Answer: 'Shadows In the Rain'

'Shadows In the Rain' originally appeared as a fairly laborious track on 'Zenyatta Mondatta.' Sting whipped it into an upbeat number on his first solo album, 'The Dream Of the Blue Turtles.'
15. At the very end of 'O My God,' the third track of 'Synchronicity,' we hear some familiar lyrics 'ghosted' in from an earlier Police hit. Which one is it?


Answer: 'Every Little Thing She Does Is Magic'

'O My God' ends with the same words 'Every Little Thing She Does Is Magic' does: 'Do I have to tell the story of a thousand rainy days since we first met? It's a big enough umbrella, but it's always me that ends up getting wet...' Years later, as a solo artist, Sting 'ghosted' these closing lines into yet another song: 'Seven Days,' from 1993's 'Ten Summoner's Tales.' Accuse him of redundancy if you must, but hearing those lines always makes me smile.
Source: Author enfranklopedia 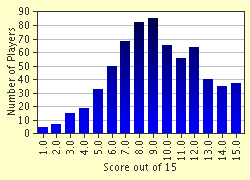 
Other Destinations
Explore Other Quizzes by enfranklopedia