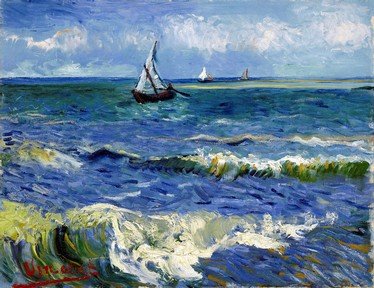 Death of an Artist Trivia Quiz

The final years of Vincent van Gogh's life were full of drama and tragedy, as well as some of the world's best-known works of art.

Quiz Answer Key and Fun Facts
1. The period of van Gogh's greatest artistic output started while he was living in Arles, where he arrived in February of 1888. Which of his artist friends did he invite to join him there so that they could set up an artists' colony?

All of these artists had been in van Gogh's circle of acquaintances before he moved to Arles, but it was Paul Gauguin whom he convinced to join him. While waiting for his friend to arrive, van Gogh started a series of paintings of sunflowers, alluded to in Gauguin's painting of him, titled "The Painter of Sunflowers: Portrait of Vincent van Gogh".
2. One of the things you probably know about van Gogh is that he cut off his ear. What happened in December of 1888 to lead to his self-mutilation?


Answer: He was upset after an argument

Only the argument (with Gauguin) actually ever happened. He never married or had children, although he once wrote that he considered his paintings to be his children. Despite van Gogh's admiration for Gauguin, and his desire that the two of them set up an artists' colony, it seems that the relationship was strained due to clashes of temperament. Gauguin arrived to stay on October 23, 1888; the famous argument, during the course of which van Gogh threatened Gauguin with a razor, occurred on December 28, 1888. By the time van Gogh got back to their shared house after being treated in hospital for his injury, Gauguin had packed his things and left.

There is some debate as to whether van Gogh simply sliced off a bit of his earlobe, or removed the entire outer ear, or something in between. In fact, it has been suggested that it may have been done by Gauguin in the course of their argument!
3. A few months after the incident with the ear, van Gogh committed himself to a hospital in Saint-Remy-de-Provence, where he painted the clinic and its surrounds while receiving treatment. Critics note that his technique during this time involved increasing use of swirls. Which of these paintings clearly shows that technique?

"Starry Night" is one of van Gogh's best-known paintings, with its swirls and swoops of night sky that always remind me of fingerprints, although I believe they should bring to mind spiral galaxies. The scene from his bedroom at the clinic was actually painted from memory, somewhat unusually for van Gogh, who preferred to paint what he was actually observing.

The other paintings were all painted at an earlier period - "The Potato Eaters" was one of his earliest works, from 1885; the other two came from the Arles period.
4. On leaving the clinic in Saint-Remy-de-Provence, van Gogh moved to the town of Auvers-sur-Oise, to be near his physician of choice, a man whom he found to be nearly as depressed as himself. Who was this doctor of whom van Gogh painted several portraits?

Dr Paul Gachet (the only non-fictional doctor on offer) came recommended by van Gogh's friend Camille Pissaro, and was himself an amateur artist. He was the subject of at least three portraits and an etching, in all of which van Gogh emphasized his gloomy demeanour.
5. What was the cause of van Gogh's death?

Although the circumstances under which he received his fatal injury are not clear, it is clear that he died from a gunshot wound to the chest that he received during the day of 27 July 1890. He may have been painting in the fields at the time, or he may have been in a barn near the inn where he was lodging. He may or may not have been alone at the time.
6. Although it is generally believed that van Gogh committed suicide, which of these alternative explanations of his death was advanced in a 2011 biography?


Answer: he was accidentally shot by two young boys

"Van Gogh: The Life" by Steven Naifeh and Gregory White Smith argues that the fact that no gun was ever found, and that van Gogh left no suicide note, suggests he did not in fact commit suicide. They posit that he might have been accidentally shot by two teenage boys playing with a malfunctioning pistol, and decided to shield them since he realised he could not survive the injury. Alternatively, he may have engaged in an argument with the boys, and been shot by them during the argument.

This manslaughter theory is somewhat supported by the nature of the gunshot wound, which was at an angle that is unusual for a suicide. Most authorities, however, still support the suicide theory.
7. After being fatally wounded on 27 July 1890, when did van Gogh actually die?

After being shot during the day of 27 July, van Gogh died in the evening of 29 July. He actually died of infection following the gunshot wound, not from bleeding to death. He was buried in the town cemetery of Auvers-sur-Oise on 30 July. The service was attended by his brother Theo, some of van Gogh's artist friends, and a number of locals, including Dr Gachet.

He was either accidentally shot by someone else, or he committed suicide and shot himself.
8. Which of these paintings is commonly, but almost certainly erroneously, thought to be the last painting that van Gogh completed before his death?

In line with the suicide theory of his death, it would indeed be fitting if the ominous "Cornfield with Crows" (sometimes also called "Wheat Field with Crows") were van Gogh's last painting. However, it was completed around 10 July, and there is conclusive evidence from his letters that he painted "Daubigny's Garden", "Auvers Town Hall on 14 July 1890" and "Cottages with Thatched Roofs" after that.

Some art historians consider that around seven paintings were completed after what is usually considered his last painting. Because his output was so prolific (he was producing better than a painting a day during his final months), it is difficult to identify the very last one.
9. It is widely believed that at the time of his death van Gogh had only sold a single painting. Which one of these did he definitely sell a few weeks before his death?

All of the other paintings have since sold for over $US100 million. Most art historians agree that he did actually sell some other minor works during his life, but the only one for which there is documentation is "Red Vineyard at Arles", which was sold in 1890 at auction in Brussels for around 400 francs.
10. According to the lyrics of a song by Don McLean, "I could have told you, Vincent, this world was never made for one as beautiful as you." What was the title of this song?

The incorrect options are also songs by Don McLean, but they have nothing (directly, at any rate) to do with Vincent van Gogh. The song "Vincent" contains many references to the life and art of van Gogh, so much so that I sense another entire quiz lurking in the wings. "Vincent" was released on the album "American Pie" in 1971.

The song is also often referred to by its opening line, "Starry, Starry Night", which was also the name of a live album produced in 2001.
Source: Author looney_tunes 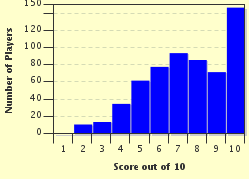 Related Quizzes
This quiz is part of series Art and Artists:

These quizzes cover a variety of art forms, from antiquity to contemporary.