This quiz is about escapes from Alcatraz. Some are famous and some are not. Alcatraz was considered 'the escape proof prison', but as you will see from this quiz, it most definitely was not escape proof. Good luck!

Before he became the warden of Alcatraz, he was the warden of San Quentin prison. At San Quentin he was given the nickname 'Golden Rule Warden' because he carried with him a reputation as a strict disciplinarian. In 1934, he became the very first warden of Alcatraz, where he was able to hand pick his correctional officers from the Federal Prison System. During Johnston's reign as warden, Alcatraz had a very famous criminal, Al Capone.

Joseph 'Dutch' Bowers was forty years old when he attempted to escape from Alcatraz. Unfortunately for Bowers he was shot twice and fell head first over a cliff. The fall did not kill him. The cause of his death was a bullet lodged in his lungs.
3. On Thursday, December 16, 1937, Theodore Cole (inmate no. 258-AZ) and an accomplice escaped. What was the name of his accomplice?

Theodore Cole and Ralph Roe escaped by using a wrench which was taken from the shop where they were working. The duo forced a lock on a gate and dropped twenty feet to the beach. A search of the island revealed nothing. In 1941, four years after their escape, a San Francisco Chronicle reporter declared the pair were living in South America. This information was never proven.
4. On Tuesday, May 23, 1938, inmates Rufus Franklin (inmate no. 335-AZ), Thomas R. Limerick (inmate no. 263-AZ), and James C. Lucas (inmate no. 224-AZ) attempted to escape from the penitentary. What MAIN crime did all three have in common?

All three men have the crime of bank robbery as their common link. Rufus Franklin's other crimes included: auto theft and assault. Thomas R. Limerick's other crime was kidnapping, and James Lucas' other crime was auto theft. Sadly, these three men failed in their attempt to escape. Limerick died from a gunshot wound to the head. Franklin and Lucas were given life sentences because in the failed escape attempt the trio murdered R.C. Cline who was a guard.
5. On Tuesday, May 23, 1938, inmates Rufus Franklin (inmate no. 335-AZ), Thomas R. Limerick (inmate no. 263-AZ), and James C. Lucas (inmate no. 224-AZ) attempted to escape from the penitentary. During the escapte, a guard was killed. What was the name of the guard?

Barker, McCain, Martin, Stamphill, and Young escaped in the early morning of Friday the thirteenth. These five men should have known better than to escape on a day that is associated with bad luck because all five were captured while on the island, half nude and attempting to make a raft.
7. On Friday, January 13, 1939, five prisoners escaped. This was the only escape that occurred on Friday the 13th?

Barkdoll, Cretzer, Kyle, and Shockley each had a life sentence. On the day of their attempted escape, they lured a guard into the shop where they worked and bound and gagged him. The would-be escapees then tried to pry open a window with a piece of pipe.

When Captain Madigan happened into the shop, the four men overpowered him. Madigan told the men that he was do to call in and, if he didn't, an alarm would be set off. When the convicts realized that they weren't going to make it, they freed the two men and surrendered.
9. On Monday, September 15, 1941, John R. Bayless (inmate no. 466-AZ) attempted to escape. What was his sentence?

Bayless was sentenced to 25 years for the crime of bank robbery. He had only ten more years left on his sentence when he tried to escape. Bayless was working on garbage detail outside the prison. When the detail was called to line up to go inside for the night, Bayless was discovered missing.

Fred Hunter (inmate no. 402-AZ) was the fourth man in this escape attempt. Hunter was in Alcatraz for harboring Alvin 'Old Creepy' Karpis. The convicts attempted their escape by jumping out a window, and plunging thirty feet down a cliff into the water.

The tower guards, hearing the commotion, shot at the convicts in the water. Moments later a prison launch came alongside of Brest, who was holding Boarman. Boarman was unconscious. As Brest reached out for help, Boarman disappeared beneath the water. Everyone assumed Boarman was dead. Now the hunt was on for the other two men. Hunter was discovered in a cave, and Hamilton, who was presumed to be dead was found three days later in the same cave as Hunter.
11. Between Thursday and Saturday, May 2 to May 4, 1946, Bernard Paul Coy (inmate no. 415-AZ), Joseph Paul Cretzer (inmate no. 548-AZ), Clarence Carnes (inmate no. 714-AZ), Marvin Franklin Hubbard (inmate no. 645-AZ), Sam Shockley (inmate no. 462-AZ), and Miran Edgar 'Tex' 'Buddy' Thompson (inmate no. 729-AZ) attempted to escape. These six men were famous for there rampage. What was the name given to their three days of terror?


Answer: The Battle of Alcatraz

The Battle of Alcatraz lasted for three days. During this time the would-be escapees terrorized the guards. Coy, Hubbard, Cretzer, and Carnes were given life sentences for their part in the 'battle'. Thompson and Shockley were convicted of murder and were put to death in the gas chamber at San Quentin.
12. Between Thursday and Saturday, May 2 to May 4, 1946, Bernard Paul Coy (inmate no. 415-AZ), Joseph Paul Cretzer (inmate no. 548-AZ), Clarence Carnes (inmate no. 714-AZ), Marvin Franklin Hubbard (inmate no. 645-AZ), Sam Shockley (inmate no. 462-AZ), and Miran Edgar 'Tex' 'Buddy' Thompson (inmate no. 729-AZ) attempted to escape. These six men were famous for there rampage. How many guards were murdered?

Two guards, Harold P. Stites and W.A. Miller, were killed and thirteen others were wounded.
13. Between the years 1948 and 1955, there were ten more attempted escapes.

Paul J. Madigan was the warden between 1955 and 1961. During his tenure there were only two attempted escapes.
15. On Monday, July 23, 1956, an escape attempt was made. The prisoner was found hiding near the water's edge at the foot of the cliffs. What was his name?

Wilson, whose inmate no. was 956-AZ, was on The Rock for the murder of a chain store manager in a robbery attempt. He was sentenced to life for his crime.
16. On Monday, September 29, 1958, Aaron Walter Burgett (inmate no. 991-AZ) and Clyde Johnson (inmate no. 864-AZ) made their attempted escape. Which one of these two men were convicted of for robbing a post office?

Burgett was convicted of robbing a post office and was given 26 years for his crimes. Clyde Johnson was convicted for robbing a bank.
17. Who was the warden between 1961 and 1963?

Between the years 1961 and 1963, Olin G. Blackwell was the warden. During the final years of Alcatraz and Blackwell's tenure, there were only two escapes. The most famous was Morris and the Anglin Brothers. Darl Lee Parker and John Paul Scott attempted to escape. John Paul Scott was the only convict that made it to the San Francisco shoreline. Scott proved that a prisoner could swim to San Francisco, giving hope that maybe, just maybe, the Anglins and Morris made it also.
18. On Monday, June 11, 1962, inmate no. 1485-AZ, inmate no. 1476-AZ, and inmate no. 1441-AZ escaped from Alcatraz. What were their names?

Clarence and John Anglin, along with Frank Morris escaped from Alcatraz. Morris was considered the mastermind behind this famous escape, he had an I.Q. of 133 and was considered a genius, bordering on superior intelligence. The three men left after lights out at 9:30pm.

It wasn't until the next morning that their escape was noticed. The guards, upon entering their cells were horrified to find dummy heads in the beds. Morris and the Anglins had crawled through the mesh covered air vents and climbed up pipes in the utility corridor to a ventilator opening at the top.

The men then climbed on the roof of the prison and climbed down a pipe. Then they climbed over a chainlink fence to the shoreline of Alcatraz. Once on the beach they began to fill their life vests and rubber float with air.

Then they headed out into the darkness and out into the below freezing temperatures of the Pacific. The Friday following their famous escape, a water proof packet was found. The packet included pictures and addresses that belonged to Clarence Anglin.

This led the warden to believe that they drowned. To this day, the question of whether they made it or not is one of the biggest mysteries. In 1973, this famous escape was made into a movie starring Clint Eastwood as Frank Morris. The movie was called 'Escape From Alcatraz'. Did they make it? You decide. I personally believe that they did. After all, no positive proof was ever provided to say otherwise.
19. A fourth person was in on the planned escape with inmate no. 1485-AZ, inmate no. 1476-AZ, and inmate no. 1441-AZ. What was his name?

West was supposed to have gone with Morris and the Anglins, but he made his hole to small. When he did try to go he got stuck. He also didn't realize that his hole was right in front of a pipe. On the night of the famous escape, Morris tried to help him, but in the end they left him behind. Because of him, intimate details were known about the escape that otherwise would have went unanswered. Thank you Allen West for not being able to go.
20. How many escapes and attempted escapes were made at Alcatraz (total of escapes and attempted escapes combined)?

There were a total of fourteen escapes at Alcatraz. So much for being 'Escape Proof'. All information contained in this quiz can be found at www.alcatraz.com.
Source: Author JuniorTheJaws 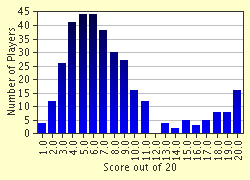 Related Quizzes
1. Murder Trials of the Century Average
2. Screw the Rules, I Have Money Easier
3. You Have The Right to Remain Tough
4. Executions in Britain Tough
5. Scary Marys Average
6. America and the Death Penalty: 19th Century Tough
7. Before They Were Infamous Average
8. British Poisoners Tough


Other Destinations
Explore Other Quizzes by JuniorTheJaws